Protected monuments which include ancient temples, caves, natural formations, wildlife reserves and sanctuaries have been declared world heritage sites all over the world. This tag helps in preserving their culture and identity and also ensures that the areas are not destroyed by time or people as special steps are taken to protect them. The government has a special responsibility in ensuring that these places designated as world heritage sites are protected as culture icons of the country.

The Ellora Caves known to the locals as Verul or Elura can be seen on the Aurangabad-Chalisgaon road situated about 30 km north-west from the town of Aurangabad in the State of Maharashtra. A protected UNESCO World Heritage Site, these amazing caves are an example of the largest rock-cut monastery temple cave complex and stand as a unique masterpiece of craftsmanship of our artisans. The cave temples of Ellora showcase unity in diversity representing three major religions as they are dedicated to Hinduism, Buddhism and Jainism and were created during the period 600 to 1000 CE. There are over 100 caves at the site though only 34 have been opened to the public. About 30 of the caves were carved out of the vertical face of the Charanandri Hills in the 5th Century AD. Caves 1 to 12 represent Buddhism, Caves 13 to 29 are dedicated to Hinduism, and Caves 30 to 34 belong to Jainism. The Caves thus stand testimony to the religious tolerance and harmony prevalent during the times. From the inscriptions found there, archeologists have come to believe that these caves could have been patronozed at different periods of time by the Rashtrakutas, Kalachuris of Mahismati, Chalukyas of Badam and Yadavas of Deogiri. 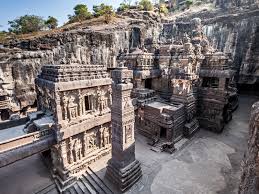 The prominence of the caves is largely due to its location. The area was a hotbed of commercial activity in the ancient times as it was on an ancient trade route of the Deccan region. These caves must have served as monasteries and shelters for monks and a place for pilgrims to pray and rest. The excavations at the archaeological site reveal the patronage of the kings. As it lay on a route where there was considerable human movement, the caves were regularly visited by travelers and kings en route and this has ensured its preservation, unlike many other caves that have fallen into neglect and ruins due to isolation.

It is interesting to find out how exactly these caves came to be formed. The area appears to have been in the region of ancient volcanic activity of the Cretaceous geological period. The volcanic eruptions must have created multi-layered basalt formations over a long period. These are known as Deccan Traps. The west-facing cliffs of the Deccan Trap lodge the Ellora Caves. Flat summits have created the cave like sheltered structures. The basalt formation allowed architects and sculptors to create such artistic expressions on rock. The brownish red colour of the rocks might be due to the lava that once flowed from the volcanic mountains. These rocks were also used in the construction of the Grishneshwar Temple in the vicinity.

The area is picturesque with many streams that merge into the Godavari river system especially during the monsoon season.

Each of the caves is a masterpiece and a tribute to the sculptor who has created it. The Buddhist Caves have monastery shrines with carvings of the Sakya Muni, the Bodhisattvas and saints and the artisans have given it a look of wood. The Vishwakarma cave also known as the Carpenter’s Cave is a visual delight. Cave 16 houses the largest single monolithic rock excavation in the entire world as it bears the Kailasha Temple, a chariot shaped monument in honour of Lord Shiva. Besides this excavation has also brought out various gods, goddesses associated with Vaishnavism , Shaktism and also many relief panels depicting scenes from the Ramayana and Mahabharata. Vedic deities, dashavatars, and innumerable gods and goddesses can be seen in the shrines. The Indra Sabha, Chhota Kailasa and Jagannath sabha are other visual treats. The Jain Caves depict the jinas, the tirthankars and also the Samavasarana which depicts the sermon given by the Tirthankar after attaining enlightenment can be seen. They also exhibit intricately carved ceilings.

Many of the figurines bear the ravages of time not just due to nature but also because of vandalism and desecration. Declaring it a protected monument and educating the visitors about the glory of our heritage will certainly go a long way in preserving these monuments for posterity.