Every devout Hindu knows that Puri Jagannath Temple is one of the four Vishnu Dhams in Hinduism. However, many Hindus don’t know that the Jagannath Temple Complex houses one of the four Adi Shakti Piths- the Bimala Mata Temple. The other Adi Shakti Piths are:-
• Maa Tara Tarini Temple in Behrampur, Odisha.
• Maa Kamakhya Temple in Guwahati, Assam.
• Maa Dakhina Kalika in Kalighat, Kolkata, West Bengal. 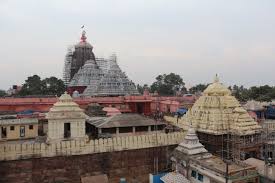 There is a Pouranik philosophy regarding the offering of uchchista to Maa Bimala. Once Shiva visited Vishnu’s celestial abode Baikuntha. There, Shiva noticed a few food grains which had fallen on the ground after Vishnu had finished his meal. Shiva took one grain and swallowed it. Unbeknownst to him, half of that grain remained stuck on his beard. When he returned to Kailasha, Narada Muni saw the half grain on his beard and ate it. Parvati was furious seeing her rightful share being eaten by Narada. When Vishnu learned about the incident, he pacified Parvati by promising her something- that in Kaliyuga, she would live at Puri as Bimala and would daily have the remnants of his food.

Each year, Devi Bimala is worshipped with grandeur during the Durga Puja. Devi Bimala is considered the fiercest form of Shakti. Since Shakti is at the peak of her destructive form during Nabaratri, women devotees are prohibited from visiting the shrine during this period because they are considered “weak hearted” to witness the fierceness of the Devi.