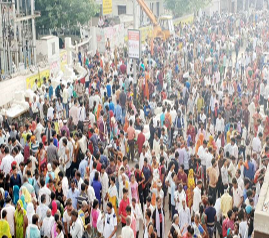 Govardhan Is A Sacred Place, Which Is Situated In Mathura, at Uttar Pradesh. It is believed that at this place, Lord Krishna had lifted the Govardhan hill on his finger. Considering it as a holy place, regularly, devotees from all over the world visit this place in order to do Parikrama (circumambulation) of the hill. During the auspicious festivals like Guru Purnima and Govardhan Puja, we can found lot of crowd who would do Parikrama, and for doing the Parikrama one must be prepared to walk at least for 5 hours. During the time of performance of Parikrama, the devotees can witness some holy places like Radha Kund, Shyama Kund, Kusuma Sarovar, Rinamochana, and Puchari.

Similar to carrying the holy Irumudi to the Sabarimala Temple, the devotees who do the Parikrama would usually carry a pot filled with full of cow’s milk, since Lord       Krishna likes cow and its milk and other by-products of the milk like curd, cheese, butter and ghee. As per ancient legend, those who do Parikrama of Govardhan Hill would be blessed by Lord Krishna, and they would be relieved from their sins and diseases.

The Govardhan parikrama can be performed throughout the year. But it is suggested to do Govardhan Parikrama during the winter season, since during the winter season, the pilgrims can enjoy a good weather condition and we can see lot of pilgrims circumambulating the holy Govardhan Hill especially during the months of October, November and December. Lord Krishna is worshipped in the form of child by most of his devotees, and the city of Mathura is considered as his favourite place, since he has spent his young age in that place. Circumambulating the Govardhan Mountain is similar to circumambulating the holy Arunachala Mountain, and hence, let us come to this sacred place, at least once in our life time, in order to perform Govardhan Parikrama.