Worshiping the twelve Jyothirlingas, at least once in a lifetime, can lead a devotee towards moksha. The twelve Jyothirlingas are scattered all over India and the following article discuss about Grishneshwar, the one located at Verul, Maharashtra. The temple is situated nearby the famous Ellora caves and is also known by four other names including Kusumeswarar, Ghushmeswara, Grushmeswara and Grishneswara.

The temple of Grishneshwar is situated in a small Maharashtrian village of Verul. Present in the city of Aurangabad, the village is around 20 km from Daulatabad. The village oozes out a perfect spiritual ambience and is considered for devotional purposes because of its serenity and calmness. The abode of Lord Shiva, where he is worshiped in his Linga form, is located at the Shivalay pilgrimage centre in the village.

Out of the twelve Jyotirlingas, the Linga of Grishneshwar is the last one to be worshiped and the pilgrimage of the twelve Jyotirlingas is not considered complete without paying obeisance to the one located at Verul. On the way from Daulatabad to Ghrishneshwar, there are a number of holy sites which are worth worshiping including Dhareshwar, Sahasra Ling, Pataleshwar, and Suryeshwar.

To quote what Madhwamunishwar once said about the temple – “Blessed by Verul Nagar, there is no other place like it on this earth, where Lord Grishneshwar resides, the best place on this earth.”

The present Lord Grishneshwar Temple was built by Maharani Ahilya Bai Holkar, the Holkar Queen of Maratha who ruled the Malwa kingdom during the late 18th Century AD. However, the ancient temple was renovated during the times of Maratha rule, Verul was predominantly ruled by the grandfather of Shivaji Bhosle, Maloji Bhosle during the 17th Century.

It is said that Maloji Bhosle once found a chunk of treasure kept hidden inside a snake pit. Since he was an ardent Shiva follower, he decided to spend the treasury in the renovation of Lord Grishneshwar temple. He also built a lake nearby the temple which is popularly known as Shikharshinganapur. 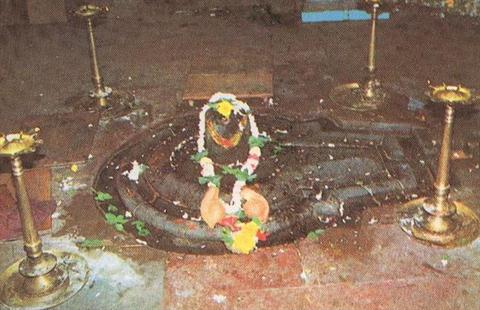 The main deity in the temple, as Jyothirlinga, is facing the east. It is installed inside the main temple which is made up of spotted red stones. Inside the Garbhagriha (sanctum sanctorum), both Ghrishneshwar and his consort, goddess Grishneshwari are present. The temple has three main doors and all are open for devotees. Outside the Garbhagriha there stands a huge Nandi statue which attracts the attention of all visitors passing by.

The temple evidently reflects medieval architectural style and is full of beautiful carvings. Also, the Marathas have beautifully preserved the Nagara architectural style of the temple. The temple’s main attraction is the sabha mandap (hall) decorated with 24 pillars adorned with stunning sculptures.

There is, in fact, a collection of ornamental friezes and carvings of various Indian deities like Brahma, Vishnu, Ganesh. The marriage of Lord Shiva and Parvati has also been depicted with extreme creativity. The rich Maratha culture has also been preserved and present here is a set of carved sculptures of various Maratha heroes.

Every Monday, thousands of devotees visit the temple as the second day of the week is considered the day of Lord Shiva. Again, all the Shiva festivals, especially Mahashivratri are celebrated here with utmost zest and zeal. Shravan mela (falling in the month of Savan, July-August) and Vaikunth Chaturdashi (falling in the month of Kartik, November) are also celebrated with great pomp and show.

The first legend is mentioned in the ancient epic Shiva Purana. On a mountain called Devagiri a pious Brahmin named Brahmavetta Sudharm lived along with his wife Sudeha. The couple was very happy until they found out that Sudeha would never be able to bear a baby. This made Sudeha urge her sister Ghushma to get married to her husband Sudharm. For the happiness of her sister, Ghushma got married to Sudharm.

Every morning, Ghushma used to worship 101 Shivlingas and after worshiping them she would throw all the Lingas in the nearby pond. After few months, with the blessings of Lord Shiva, Ghushma gave birth to a baby boy. As the son reached a marriageable stage he got married to a suitable girl. The whole family was living quite happily, though slowly Sudeha started getting jealous of her sister. By the day she started getting so covetous of her sister’s son that she reduced to killing him. One night, she killed Ghushma’s son and threw away his dead body into the lake where Ghushma used to throw her Shivlingas after every puja.

The next morning when Ghushma’s daughter-in-law saw the blood stained bed and found her husband missing, she directly informed everybody in the house. However, upon knowing this, both Ghushma and Sudharm didn’t lose their equilibrium and kept praying to Lord Shiva with all their persistence.

Seeing the unconditional devotion of Ghushma, Lord Shiva brought forth her son to her. Shiva also granted her two boons. In her first boon, Ghushma asked the Lord to provide conscience and generosity to her sister. In her second boon, she asked him to stay back there. Thus, the Lord made the temple of Lord Grishneshwar his abode and lived there in the form of a Linga. He assumed the name Ghushmeshwar and hence the lake began to be known as Shivalaya.

Once a king went on a hunting expedition and he recklessly started killing all birds and animals. Amid this, he also killed all the animals residing with the Rishis and Munis. As a result, he was cursed and his whole body got infested with various insects. The curse-stricken king started wandering in the midst of the forest. After sometime when the king was extremely thirsty, he found a water hole created by a horse’s hooves. Upon drinking the water, the king set himself free from the curse. The newly reformed king began a severe penance and seeing his sincerity Lord Brahma got pleased and appeared himself to set up Parashta Teerth there. By virtue of Lord Brahma, a lake sprung up there which was initially called Brahma sarovar, but later it began to be called Shivalay.

Once in the heaven, when Lord Shiva and Parvati were playing chess, Parvati checkmated Lord Shiva after which he got agitated and made his way southward and reached the Sahyadri range. Being unable to stay without her husband, Parvati also arrived there and the two of them started wandering around. By virtue of Lord Shiva, Shivalay range and Kamyakavana forest got established and flourished there.

Once, Parvati was mixing the vermillion and saffron onto her palms with her thumb. When she took the water from Shivalay, a miracle occurred and her vermillion turned into a Linga. She installed the Linga there and this Jyotirlinga was named Kunkumeshwar. Later, Parvati renamed this Jyotirlinga as Grishneshwara, since it was from the friction of her thumb.