Gurudwara Bangla Sahib is one of the most holy places of pilgrimage for the Sikhs. It is situated near Connaught Place, New Delhi and is associated with Guru Har Krishan the eighth Sikh Guru. Earlier it was a palace and was later transformed into a shrine in memory of Guru Har Krishan for his fearlessness and selfless service to humanity. The golden dome of the Gurudwara and its tall flagpole Nishan Sahib gives it an ethereal look which can be seen for miles.

As the seventh Guru Har Rai had chosen his younger son Har Krishan who was only five years old instead of his elder son Ram Rai there were a lot of tensions created by Ram Rai who was disinherited and excommunicated by his father. Guru Har Rai had been unable to give much attention to the Sikh centres outside Punjab. Some of the heads of the Sikh centres (Masands) began abusing their powers and Ram Rai began to influence the Sikhs about his rightful possession of the Guruship. Guru Har Rai though only five years old was a Child Guru like Dhruva, Prahlad etc. He was said to be a highly illumined soul with a deep knowledge of the scriptures and had a melodious voice with which he sang hymns beautifully. He would arrange medical aid for the sick and was always helping the poor and the needy. Love and compassion was the hallmark of his interpretation of religion. His charitable disposition and calm countenance soon endeared him to all and his fame spread far and wide. He soon consolidated his position even in distant Sikh centres. Meanwhile Ram Rai joined hands with the Mughal Emperor Aurangzeb who agreed to help him as he felt that by setting the two brothers against each other he could get Ram Rai to spread Islam in Punjab. Ram Rai prevailed upon Aurangzeb to summon Har Krishan to Delhi. His mother along with other prominent Sikhs accompanied him on his journey.

Jai Singh was a Rajput prince and one of the senior generals under the Mughal Emperors Shahjahan and later Aurangzeb and was the ruler of the kingdom of Amber (later on known as Jaipur). Though a staunch Hindu he was a great admirer of the Sikh Gurus. He was a great warrior and fought many battles under the Mughals and due to his able leadership won all of them. Aurangzeb then made him Governor of Delhi city. When Aurangzeb summoned Guru Har Krishan under Ram Rai’s insistence, the Sikhs approached Jai Singh for help as they feared for Guru Har Krishan. Raja Jai Singh then took charge of the situation and gained assurance from Aurangzeb that as long as matters were not resolved, Guru Har Krishan would stay in his bungalow as a guest. The bungalow was known as Jai Singhpura Palace in the historic neighbourhood Jaisingh Pura which was later demolished to make way for the shopping district Connaught Place.

During Guru Har Krishan’s stay in Delhi in 1664 there was a cholera and small pox epidemic. Guru Har Krishan immediately went to offer help to the affected. He distributed medicines and soothed them with words of compassion. Like a messenger of peace and solace he moved about them and his very presence healed them and brought relief to their suffering. Soon he himself contracted the deadly disease. It is said that seeing death and suffering in large numbers the Guru took it upon himself out of compassion to absolve the inhabitants of Delhi from it. Raja Jai Singh constructed a small tank and water from this tank was given to the afflicted and the suffering by Guru Har Krishan. The water was said to have healing properties and even now Sikhs from all over the world take it back to their homes in great faith. This Sarovar and its water known as Amrit along with the Gurudwara are now a place of great reverence for the Sikhs.

The Gurudwara opens to a large main hall with an open central shrine. A sculpted bronze cupola hangs over it. At a small golden dome the holy book of the Sikhs The Guru Granth Sahib is placed on silken sheets and covered with flowers. The golden dome which is gold plated and beautifully carved is magnificent. The floors are made of marble and the walls and pillars are embellished with floral designs and the holy writings of the Sikh scriptures. The temple complex includes a a secondary school, library, museum cum art gallery, bookstall and hospital. Langar is practiced as with all Sikh Gurudwaras where all pilgrims irrespective of class, caste or creed eat in the Langar hall(community kitchen). The museum is named Baba Baghel Singh after the Sikh general who supervised the construction of nine Sikh shrines in Delhi during the reign of Mughal Emperor Shah Alam II and a number of paintings depicting several instances in Sikh history are present here.

The birthday of Guru Har Krishan, Baisakhi, Bandi Chor Divas and special occasions of all the Sikh Gurus are celebrated with great pomp and reverence. The Sikh tradition of Sangat(religious congregations) and Pangat(community kitchen) are followed with great zeal.

Air- Delhi is well connected to all major cities with domestic and international flights and the international airport is 23 kms away from the main city.

Rail- Delhi is well connected to all cities by train and the Delhi metro railway is an efficient system of commuting within the city. The shrine is at a walking distance from New Delhi railway station.

Road- Buses, taxis and auto rickshaws ply to all parts of the city. From the main bus stand known as the Inter State Bus Terminus or ISBT one can get a bus to the shrine.

The temple complex houses a “Yatri Niwas’ a place where devotees can stay and a multi level parking space with a capacity of 1000 cars and a toilet complex.  Accommodation is also available at the hotels present in Connaught Place.

The peaceful, pious and serene atmosphere of the temple with the chanting of the Gurbani resounding through the air throughout the day makes it a sacred place for devotees whose faith and devotion increases with the spiritual vibrations of the place. 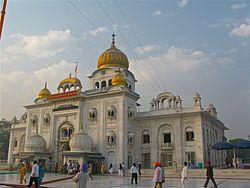