Takht Shri Hazur Sahib Nanded is one of the most holy places of pilgrimage of the Sikhs and is one of the five Takhts or seats of temporal authority of Sikhism. It is located on the banks of the river Godavari in Nanded, Maharashtra. It was the place where Guru Gobind Singh the last Sikh Guru took his last breath and it was built by Maharaja Ranjit Singh taking 5 years to complete. The Gurudwara within the complex is known as ‘Sachkhand’ meaning Realm of Truth. Guru Gobind Singh referred to Nanded as Abchal Nagar or steadfast city after the first word of a hymn.

Guru Gobind Singh appointed the Guru Granth Sahib as his successor and Eternal Guru. Realising that noble ideas are eternal unlike humans who are perishable he made the Granth Sahib a repository of sublime ideals and a spiritual and secular Guru. He founded the Khalsa Panth and baptised a non Sikh Banda Singh Bahadur to Sikhism in Nanded who later paved the way for the liberation of Punjab. He advised another disciple Bhai Santokh Singh to stay at Nanded and start Guru ka Langar for the devotees. Two of the Panj Pyare who had offered their heads when the Khalsa was created died in Nanded. After the battles Guru Gobind Singh came to convalesce in Nanded when he was attacked by assassins and he passed away here. Till his attack, he held his court and congregation here.

The temple is a two floor building and its interiors are artistically ornamented. The inner room is called Angitha Sahib and its walls are covered with golden plates. The dome is polished and there is a Kalash made of gold plated copper. The building stands on a high base and has a small square room on the second floor bearing the gilded dome topped with a tall pinnacle and umbrella shaped finial (decorative feature at the top end of an object). Technically the edifice has four storeys as there are some rooms in the basement too. The roof of the first floor has corners which are decorated with domed kiosks on octagonal pedestals. There is a fancy fencing on the roof top and oriel windows (windows that project outwards and are supported by brackets or columns). The sanctum has a marble lining decorated with inset work in floral patterns on the lower parts of the walls and tukari and stucco work on the ceiling and the upper parts of the wall. In front of the sanctum in the day the Guru Granth Sahib is placed and at night it is brought inside and placed on a marble platform. During the day weapons and relics of Guru Gobind Singh such as a matchlock gun, an old dagger, two bows, a quiver with arrows, five golden swords and a steel shield studded with precious stones are all placed on the marble platform. Recitations of the Guru Granth Sahib go on day and night. Besides the Takht Sahib are two other shrines Bunga Mai Bhagoji(comprising a large room where the Granth Sahib is placed and some historical weapons are on display) and Angitha Sahib meaning place of cremation of Guru Gobind Singh and the two close disciples of Guru Gobind Singh. Besides the rest house for pilgrims and office of the Gurudwara board there is a press and publishing house and a school for scripture reading and kirtan. The Guru ka langar is served at the langar hall as in other Gurudwaras and most of the important Sikh festivals and Gurpurbs are celebrated here.

The completion of 300 years of Gurudom and death anniversary of Guru Gobind Singh was celebrated on a grand scale at the Gurudwara in the year 2008 with then Prime Minister Manmohan Singh honouring it with his presence. To publicise the event a Jagriti Yatra was arranged through different cities and even abroad to impart Guru Gobind’s message of one God and the brotherhood of man.

Near the main Gurudwara at Gobind Bagh a laser show has recently been started. The lives of the ten Gurus in brief are beautifully described in this show with uplifting music and choreography.

Air- The domestic airport at Nanded is the Guru Gobind Singhji Airport. The nearest International airport to Nanded is Hyderabad which is about 250 km and Aurangabad airport which is 275 km from Nanded. Overnight bus service(deluxe coach) is available from Aurangabad to Nanded and Hyderabad to Nanded.

Rail- Sachkhand express is a direct special super fast train from Amritsar to Nanded. Many other trains are also linked with the railway network to Nanded.  Nanded railway line(called Shri Hazur Sahib Station)is connected to Mumbai via Manmad and Hyderabad via Secunderabad. There is a computerized railway reservation counter at the Gurudwara complex itself to facilitate booking of tickets by the pilgrims.

Road- Nanded is 650 km to the East of Mumbai by road. It is about 4-5 hours drive from Aurangabad and 11 hours from Pune. Nanded is about 250 km from Hyderabad. Several passenger bus services operate out of Nanded providing easy overnight connectivity with all most every major city in Maharashtra.  Buses from state transport corporation are also available from all the major cities from Maharastra and Hyderabad.

There are many rest houses (Yatri Niwas) with all facilities for pilgrims with over 1100 rooms. Also there are many hotels in Nanded which are budget, semi luxury and luxury.

Gurudwara Shri Hazur Sahib Nanded is one of the most sacred places as it has been hallowed by the spiritual vibrations of Guru Gobind Singh and the faith and devotion of thousands of devotees makes the place sacred and sublime.  Devotees immerse themselves in the holy ambience of the place and pray fervently to follow the teachings of the Gurus of Brotherhood of man and Fatherhood of God. 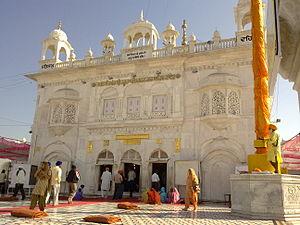 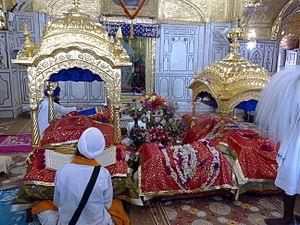