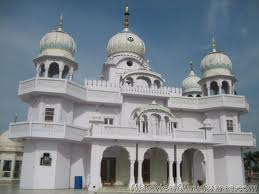 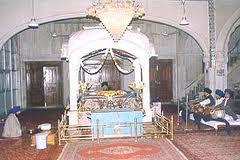 Takht Shri Damdama Sahib Punjab is one of the holiest places of pilgrimage for the Sikhs and is also one of the five Takhts or Seat of Temporal Authority of Sikhism. It is the place where Guru Gobind Singh the tenth Sikh Guru prepared the revised and authentic version of the Adi Granth or the Guru Granth Sahib and made it the official Guru or spiritual guide in 1705. It is situated at Bathinda in Punjab at village Talwandi Sabo and is also referred to as Guru-Ki-Kashi or seat of learning.

Damdama literally means ‘a place to have a break and rest’ or ‘breathing place’. After fighting the battles against Muslim atrocities Guru Gobind Singh stayed here for rest and respite. He then baptised 1.2 lakh devotees on the holy occasion of Baisakhi hence Baisakhi is celebrated very grandly here. Guru Gobind Singh held his daily assemblies here during his stay. Learned Sikhs came from all over to be near him. From here the Guru also issued commands and letters to far flung Sangats. The place became a centre of Sikh learning. Hence it was referred to as Damdami Taksal or the Damdama School of learning. Guru Gobind Singh stayed here for a year and a half. It was a wonderful period of peace and love. He showered bliss on all the people. He had lost his four sons in battle and it was an emotional period of recouping. He comforted his near and dear ones by asking them to get over the loss by treating all Sikh brethren as their children. He dictated from his memory the whole of the Adi Granth to Bhai Man Singh a devout Sikh who later became a martyr. It is said that this was because he wished to incorporate the hymns of Guru Tegh Bahadur the earlier Guru but the Dhirmals who were the custodians of the original Shri Guru Granth Sahib refused to oblige the Guru and send him the original text. Thus the Guru gave a second birth to the Guru Granth Sahib which was an amazing feat as it was word to word similar to the original text with additional incorporations of Guru Tegh Bahadur’s hymns along with his own. It was known as Damdama Sahib Ki Bir.

The present building of the Takht is a spacious hall with a high ceiling and with a pavilion at either end. The Takht is a square platform 2 mts high lined with white marble and marked off with numerous columns in the southern part of the hall. This is the sanctum sanctorum on which the Guru Granth Sahib is placed. The sacred book is then carried to the old Manji Sahib in a procession by devotees singing hymns after the evening service. Reflecting glass pieces of varying colours set in geometrical and floral designs is used to decorate the interior of the sanctum. There is a domed square room topped by a tall gold plated pinnacle and an umbrella shaped finial with a Khanda at the apex over the sanctum above the half roof. Octagonal towers at the hall corners have also domed pavilions above them. All these domes are lined with glazed tiles in white, yellow and blue colours. Every morning and evening all relics are exhibited in the Takht sahib in front of all the devotees like Sword, rifle and mirror used by Guru Gobind Singh and the Khanda and rifle used by his close followers and an old copy of Adi Granth. The Gurudwara is also said to be the headquarters of the Nihangs (armed Sikh order also known as Akalis). There are ten Gurudwaras within its premises along with three tanks Akalsar Sarovar, Nanksar Sarovar and Gurusar Sarovar. Akalsar Sarovar is associated with Guru Gobind Singh and its water is considered holy and is said to cure diseases. Nanksar Sarovar is said to be associated with Guru Nanak who is said to have visited the village in 1510 AD during his second padayatra to Rajputana. The Gurusar Sarovar is said to have been constructed by Guru Tegh Bahadur. There is a Langar hall to serve food to all the devotees as is the practice in all the Gurudwaras.

By Air
The nearest airport to the shrine is the Indira Gandhi International Airport, which operates both national and international flights. One can hire a taxi or take a bus to reach the shrine.

By Train
The Ambala Railway Station is close to the Gurudwara. One can take a taxi or avail public transport to reach the shrine.

By Road
Punjab has well-connected roads and is well linked to the cities of Chandigarh, Delhi, and Haryana. Various public and private buses takes one to this place.

Accommodation is available for the pilgrims within the Gurudwara complex and hotels which are budget, semi luxury and luxury are available in Bathinda which is a short distance from the Gurudwara.

Takht Shri Damdama Sahib is one of the holiest places of the Sikhs and devotees come from all over the world to soak in the spiritual vibrations of the place as it is said to have been hallowed by the presence of three Sikh Gurus, Guru Gobind Singh, Guru Tegh Bahadur and Guru Nanak. The chanting of the Gurbani and the peaceful atmosphere helps the pilgrims in their faith and devotion and makes the entire experience elevating and ennobling for all the devotees.