Haridwar is undoubtedly one of the most sacred places of India which every devout Hindu longs to visit at least in his lifetime. The city is known by different names including Gangadwar, Kapila, Mayapuri and ‘Gateway to Gods’. Millions of people visit Haridwar on different occasions. At Haridwar, River Ganga enters the North Indian plains from the Himalayan Mountains. The water of Ganga is considered auspicious and most of the pilgrims carry back its water to store it in their house as a symbol of auspiciousness. 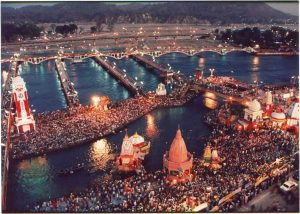 Another reason why Haridwar is considered holy is because it is the spiritual abode of the Hindu Trinity – Brahma, Vishnu and Mahesh. Millions of people converge at this sacred place during the time of Kumbh Mela (every 12 years) and Ardh Kumbh Mela (every 6 years). It is believed that a sacred dip in the Ganga relieves the devotees from the painful cycle of birth and death. Particularly, a dip into the Brahmkund of Har-Ki-Pairi is considered extremely auspicious during both the Melas. There is a powerful legend related to Brahmkund which states that the kund came into existence after the drops of Amrit or Elixir, during the churning of ocean, fell into the kund.

Besides being known as a sacred religious spot, the town of Haridwar is also famous for its rich art, culture and scientific endeavors. Other attractions of the place are Uttaranchal- SIDCUL (industrial belt) and Roorkee University (current Indian Institute of technology).

Haridwar is considered as a sacred Hindu pilgrimage which is sanctified by the footprints of the Almighty himself. The place is considered sacred for both the Shaivas and the Vaishnavas. As per the legends, at this very place the consort of Lord Shiva, Sati, lost her life burning in the sacrificial fire. When Lord Shiva performed his ‘Tandav’, to pacify Shiva’s anger, Lord Vishnu then cut the body of Sati into pieces with the help of Sudarshna Chakra. Famous Chinese Traveler Hiuen Tsang has given vivid reference to the place of Haridwar and its disastrous invasions by the plundering troops of Timur Lame. 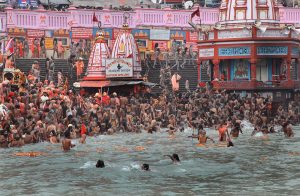 A Feast for the Eyes

Numerous Temples are located in and around Haridwar. The Har-Ki-Pairi ghat was constructed by Vikaramaditya in memory of his brother Bhartrihari. The ghat is considered to be one of the most auspicious places of Haridwar and also the rest of India. Millions of visitors who visit the ghat hardly miss out the Maha Arti, performed everyday in the evening. Chandi Devi and Mansa Devi are the temples located at trekking distance from the town of Haridwar. The Temple of Maha Devi is one of the major Shaktipeeths and is dedicated to Sati, the consort of Lord Shiva.

Daksha Mahadev Temple was built in honor of Sati’s father Daksha. As per the legend, Sati was humiliated by her father, Daksha, who didn’t invite Sati and Shiva to the grand Yagya. Although uninvited, Sati entered the Yagya place and was dishonored after which she burnt herself in the sacrificial fire. Daksha was later killed by the devotees of Lord Shiva. Daksha Mahadev Temple was built to commemorate this event.

Haridwar is famous for different fairs and festivities that are celebrated here to mark different religious and cultural occasion of India. 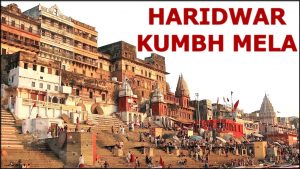 A holy dip in the Ganges during the Kumbh Mela is the most sacred opportunity every devout Hindu seeks to achieve at least once in his/her lifetime. The holy dip is believed to wash away all the sins committed in the life.

The Kumbh Mela, at Haridwar, occurs when the Jupiter is positioned in Aquarius and the Sun lies in Aries. Held every 12 years, millions of people converge here to take the holy bath and relieve themselves from the excruciating cycle of rebirths. Other auspicious days famous for bathing in the Ganges of Haridwar are Amavasya, Shivratri and Maha Kumbha day (the biggest day).

Har-Ki-Pairi is considered most sacred for bathing. It is opened for general public from early morning till 11:30 am. From 12 noon to 2:00 pm only sadhus are allowed to take the dip. It reopens for general devotees again after 2:00 pm.

The Ardh Kumbh mela is another sacred fair here which occurs every 6 years. Several people take bath in the holy Ganga to attain Moksha (Nirvana).

Holi (the festival of colors) and Diwali (the festival of lights) are celebrated at Haridwar with utmost grandeur. During Diwali, diyas (candles) are lighted across the banks of the River Ganga. The reflection of these diyas on the waters of Ganga gives the impression of stars shining on the earth.

Located, on the plains of Uttarakhand, at the foot of Shivalik ranges, Haridwar is considered the holiest city in India. It is the place where River Ganga leaves the Himalayas and enters the plains. Haridwar enjoys extreme climatic conditions. Due to its proximity to the Himalayan ranges winters are severe. Hence the best times to visit the place are autumn and spring.