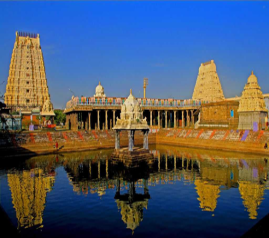 The Kamakshi Amman Temple is a popular and an ancient Hindu Temple dedicated to Ma Kamakshi, as aspect of Ma Shakti Devi, who is also called as Lalitha Tripurasundari Devi. It is situated in Kanchipuram, and it is a famous temple similar to The Meenakshi Temple in Madurai and the Akilandeswari temple in Thiruvanaikaval. This Temple was beautifully constructed by the Pallava kings.

In the main shrine of the temple, we can see the wonderful deity of Ma Kamakshi who can be seen seated in the form of a Yogini. Ma Kamakshi holds sugarcane bow and flowers, and also contains some weapons on her hand. Those who are addicted with sensual pleasures are supposed to visit this temple, in order to get rid from that. Ma Kamakshi also heals various diseases of the devotees and gives them good knowledge, wisdom, courage, physical and mental strength.

In ancient times, the deity present in this temple was very fearsome and later after the installation of Sri Chakra by Adi Shankara, Ma Kamakshi appears in a gentle manner.

Apart from the main shrine, there are also shrines for Ma Bangaru Kamakshi, Adi Shankara and Maha Saraswathi.

Annual chariot festival and float festival are celebrated nicely at this temple, and regular pujas are being performed at this temple by the temple priest. Festivals like Navaratri, Shivaratri, Aadi Pooram and Sankara Jayanthi are being celebrated once in a year. During Fridays and Sundays, we can see a large number of devotees in the temple in order to get the divine darshan of Ma Kamakshi.

In this temple, elephants are given prime importance, and similar to Go Pooja, Gaja Pooja is also being performed at this Temple.