One of the ‘seven sacred cities of India’,  Kanchipuram, also known as Kanchi, is regarded as the golden city of a thousand  temples.  Being the only city sacred to both Shaivites (Shiva worshippers) and Vaishnavas (devotees of Vishnu), it continues to dazzle the visitors with its transcendental temples with their sculptures and architectural beauty.

Kanchipuram city in Tamil Nadu is different from any other in South India because of the large number of Gopurams (temple spires) which soar into the skyline.  The city is also famous for the vast number of looms which spin out priceless Kanchipuram silk and gold sarees, counted among the finest textiles of India.  Both the temples and silk have Kanchipuram on the tourism map of India, counting it as one of the points of the golden triangle comprising Chennai, Kanchi and Mahabalipuram for tourism in the state of Tamil Nadu.

This city was the Historical Capital of the Pallavas, the Cholas and the Vijayanagar rulers. It was under the Pallavas from 6th to 8th century A.D. It later became the citadel of the Cholas, Vijayanagar kings, the Muslims and the British. During Pallava times, it was briefly occupied by the Chalukyans of Badami, and by the Rastrakutas when the battle fortunes of the Pallava kings reached a low ebb. Many of these temples are the beautiful work of Pallavas and later, Cholas. The remains of a few Buddhist stupas here also bear testimony that Buddhism also prevailed here for a while. One of the Acharya Peetas of Sri Adi Sankaracharya – The Kanchi Kamakoti Peetam is situated here. It has been a centre for Tamil learning and Culture for centuries and gives us a clear picture of the glorious Dravidian Heritage of the Vaishnavites and Shaivites.

Kanchipuram, the “Silken Paradise” is world renowned for the gorgeous hand-woven silk sarees of myriad rich colours, noted for their shine, finish and matchless beauty. The exquisite silk sarees are woven from pure mulberry silk in contrasting colours and have an enviable reputation for lustre, durability and finish. They reflect a weaving and dyeing tradition hundreds of years old and whose riches the West came seeking before the industrial age began.

About Temples of Kanchipuram

Kanchipuram city is famous for its Temples. Kanchipuram is known as the home of thousand ancient temples. The temple city of Kanchipuram is one of the seven holiest cities of India. All the various temples in Kanchipuram belong to the south Indian style of temple architecture.

Dedicated to Lord Siva, Kailasanatha is one of the earliest temples built by Rajasimha and his son Mahendra in the 8th century A.D. There are 58 small shrines situated round the main shrine. Fresco-style paintings adorn the inner walls of the shrines. Sandstone was used in the construction of this temple. It is the only temple at Kanchipuram which is not cluttered with the more recent additions of the Cholas and Vijayanagar rulers. Fragments of the eighth century murals which once graced the alcoves are a visible reminder of how magnificent the temple must have looked when it was first built.

Built in the 14th century by the Cholas, this temple is dedicated to Goddess Kamakshi – the presiding deity of Kanchi. Here, the goddess is worshipped in the form of a Chakra placed in front of the idol. An image of Sankaracharya is also worshipped. Sri Sankaracharya is said to have defeated Buddhist philosophers in debate here. It is one of the three holy places of Shakthi worship in India, the other two being Madurai and Varanasi. The temple has a golden “gopuram” in the centre. This imposing temple is the site of the annual car festival, held on the 9th lunar day in February/March.

Varadarajar temple is a massive and impressive edifice. This is another Vishnu temple on Hastagiri rock at the end of the town. The Hundred-Pillar-hall erected during the Vijayanagar period in this temple is noted for its exquisite sculptures. The ornamental rings carved out of a single stone in a chain at the four corners are the special features of the hall. The riders on horseback, beautiful figures of Rathi and Manmatha, exquisite temple jewellery are other notable features. This temple provides a glimpse of a 16th century pillared pavilion with an exuberant workmanship. The annual Garudothsavam (May – June) is most colourful and draws thousands of devotees.

This is one of the important Vishnu temples built by the Pallava king Nandhivarman Pallavamalla in the 7th Century A.D. This temple was built a few years after the construction of Kailasanathar temple. Numerous inscriptions are found in this temple relating to the wars between Pallavas and Chalukyas. Besides these inscriptions, the battle scenes of the Pallavas with Gangas and Chalukyas are depicted in bas-relief around the main Prakaram.

Apart from all this Kanchipuram is also famous of its special silk sarees and mulberry silk industry. 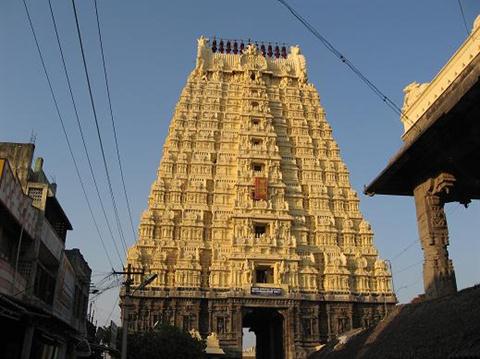 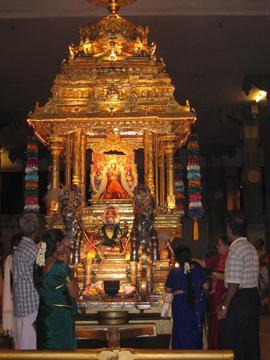