In: Popular, Travel
With: 0 Comments

A small town of Deshnok, about 30 kms south of Bikaner in Rajasthan is world famous for the presence of about 20,000 rats in the Karni Mata temple there. It is said that Karni mata is an incarnation of Maa Durga. Legend goes that Mata Karni, who resided in Deshnok in the 14th century asked Yama to return the soul of her fourth son who drowned and had an untimely death. Upon being refused, she proclaimed that thenceforth none of her family members would die and would reincarnate in the form of rats. Since the 15th century, several rats are not just fed, but are protected and worshipped in this temple erected by Maharaja Ganga Singh. People believe that spotting white rats (believed to be reincarnations of Karni mata and her sons) is extremely auspicious and could be fruitful. 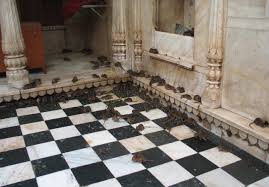