The River Kaveri, also known as the Cauvery in English, is one of the most important rivers of Southern India. The River Kaveri flows through two states i.e. Karnataka and Tamil Nadu. The irrigation and farming communities of both the states is heavily dependent upon this river. Many large cities of the southern part of India have developed on the banks of this river.

Originating in the Brahmagiri Hill, Coorg, Karnataka, the River Kaveri flows from the Western Ghats and descends into the Eastern Ghats in a south-easterly direction. In the Eastern Ghats it creates a number of falls and thereafter drains itself into the Bay of Bengal. Just before draining itself, in Cuddalore, the river divides itself into a large number of distributaries and forms a delta, which is also known as the ‘Garden of Southern India’. The Hindu devotees also refer to the river as Dakshina Ganga or the Ganges of the South.

In the upper courses of the Western Ghats the river has a very narrow path and after the rapids of Chunchankatte the river widens. The River Kaveri joins Hemavati and Lakshmantirtha, both tributaries of the river, at the Krishnaraja Sagara. In this particular place, a dam has been constructed to boost irrigation of the region. In the state of Karnataka, the River Kaveri bifurcates twice to form the two scared islands i.e. Sivasamudram and Srirangapatnam. The river also forms two rapids namely Gagana Chukki and Bhar Chukki.

After reaching the state of Tamil Nadu, the Kaveri River forms the Hogenakal Falls. At this very place the Mettur Dam has been built. After crossing Tiruchirapalli, the River Kaveri forms the Srirangam Islands, a major pilgrimage site in Karnataka. In Thanjavur, the Kaveri forms the extensive deltaic region. It almost measures 4,000 sq. miles. It is in this place that the Grand Anicut was built. The second Anicut in Coleroon, was completed in the year 1938. The tributaries of the River Kaveri are Amaravati, Noyil, Kabbani and Bhavani.

Origin of the River Kaveri

The River Kaveri begins its journey from the Brahmagiri Hills near Kodagu. The place is also known as Talakaveri or the head of Kaveri. The point of its origin is known as the Kundike pond and after some distance it meets its two tributaries i.e. River Kanake and River Sujyoti. The place of confluence of these three rivers is known as Bhagamandala. The major tributaries of the River Kaveri are as follows:

Legends associated with the River Kaveri

Vindhya (mountain) out of jealousy against Meru (mountain), desired to be taller than Meru. He started towering towards the sky and soon he acquired such a height that he blocked the Sun. Soon the people and the animals of the surrounding forests were distressed owing to the unavailability of sunlight. Disturbed by the developments, the Gods approached Sage Agasthya to intervene. Sage Agasthya requested Vindhya to halt and subside, as he wanted to go south. Vindhya soon accepted his request and also promised to wait till the return of the sage. Sage Agasthya stayed back in the south. The sage married and had a child by combining the best elements of Nature.

Fitting the jigsaw piece together

King Kavera, seeking a child, had ardently prayed to Lord Brahma. Lord Brahma’s daughter Vishnumaya wanted to serve humanity on the earth. To grant both their wishes, Lord Brahma made Vishnumaya to be born as Lopamudra to King Kavera.

In the meanwhile, Sage Agasthya wanted to have a companion who could take care of the child he had created. Sage Agasthya while wandering met Lopamudra (grown into a beautiful lady). The sage wanted to marry Lopamudra and therefore sought King Kavera’s permission. Sage Agasthya married her on the condition set by Lopamudra that the sage would never leave her alone for a long stretch of time.

A refusal to accept the unfair

Once while travelling, Sage Agasthya fell and soon became unconscious. Without any help nearby, Lopamudra herself carried the sage. On the path, owing to darkness, the foot of the sage inadvertently touched the body of a sleeping holy man. The enraged holy man cursed Sage Agasthya with death. Angered by the reaction of the holy man, Lopamudra stated that, “Let the Sun not rise if I have been a good wife by helping my husband.”

Soon after Lopamudra’s statement, the sun never rose and even the gods were concerned over the developments. They requested Lopamudra to lift her enraged curse. She said that if the Holy Man was ready to lift his curse on the sage then she would do the same. Thus, the Holy Man accepted the request of the gods and Lopamudra too kept her promise.

From Lopamudra to Kaveri

As per legend, Sage Agasthya had once converted Kaveri into water and stored it in his Kamandala. After sometime, when Kaveri learned about the action, she flowed out as a river in spite of the resistance by the sage’s disciples. Later she reappeared at Bhagamandala.

As per some accounts, it is believed that Lopamudra lived both as Sage Agasthya’s wife as well as the River Kaveri, serving the humanity. It is also believed that it was Lord Ganesha, who disguised as a crow assisted the escape of Lopamudra from the Kamandala.

So how did she become the Ganga of the south?

Lopamudra was a river called Kaveri because she was the daughter of King Kavera. She prayed to Lord Vishnu, requesting to make her holier than the Ganga. Lord Vishnu explained that Ganga was holy because she originated from his feet. Lord Vishnu stated that Kaveri would be much closer to his heart because she would be his garland. Thus the three major shrines i.e. Shrirangam, Shivanasamudra and Srirangapatna (also known as the Adi-ranga, Madhya-ranga and Antya-ranga respectively), are located on islands, with the Kaveri flowing around them, just like a garland. It is also believed that Ganga visits River Kaveri every year, through underground routes, to cleanse her sins.

An associated legend from Srirangam

The temple at Srirangam also has a legend associated with it. As per the legend, once Lord Vishnu granted the request of Lord Brahma and gave him a statue, also known as Ranganatha, depicting him in the sleeping posture lying over the Adi Sesha (great serpent). After the performance of deep penance, Ikshvaku gained possession of the statue. The possession of the statue of Lord Vishnu was then given to Rama, since he was one of the descendants of Ikshvaku. Rama prayed and worshipped the statue with ardent devotion.

Interestingly, the temple built by the Cholas is faced towards Sri Lanka and the statue of Lord Ganesha has a little bump on his head.

River Kaveri flows through the states of Karnataka and Tamil Nadu. Originating from the Brahmagiri Hills, joins the Rivers Kanaka and Gajoti upon entering the plains. Further downstream, it meets Rivers Hemavati and Lakshmantirtha and collectively confluences at the Krishnaraj Sagar reservoir.

The River Kaveri is of extreme religious significance in India. Indians worship River Kaveri as a goddess and is revered as Kaveri Amman. It is widely believed that she ushers peace and washes away all our sufferings and therefore purifies our soul.

Other purpose of the Kaveri River

1.   The River Kaveri begins its journey from the heights of the Western Ghats and drains itself into the Bay of Bengal.

2.    The River Kaveri is also spelled as Cauvery in English.

3.    The River also hosts the Asia’s first hydroelectric plant, which powers the city of Bengaluru.

4.    Though shared between Karnataka and Tamil Nadu, the majority of the water share of the Kaveri River goes to Tamil Nadu.

6.    The holy temple town of Talakad, which hosts the famous Panchalinga Darshana festival every 12 years, is located on the banks of the River Kaveri. 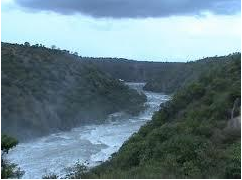 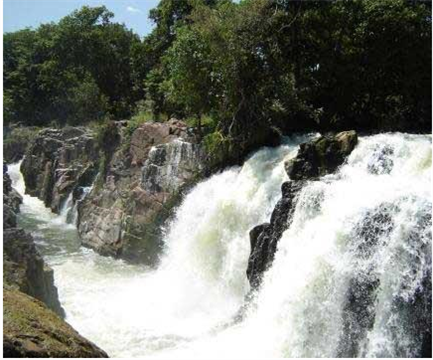 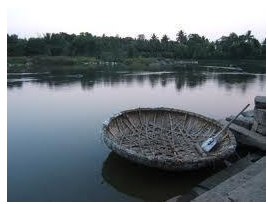 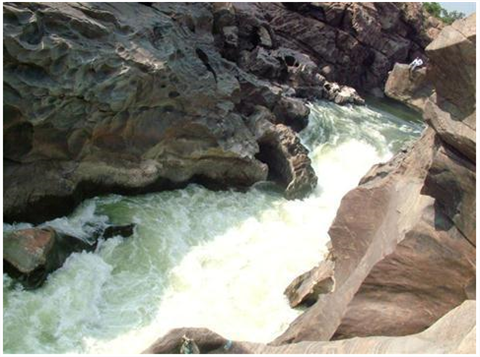