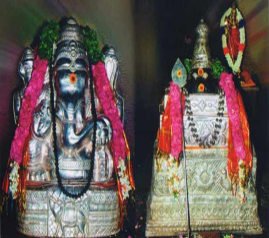 Kolanjiappar temple is situated in a village in Virudhachalam  in Tamil Nadu, and here Lord Murugan is being worshipped as the chief deity. This temple was visited by the holy saint Sundarar and due to that, it had attained good name and fame.

This temple is kept open for the public view from 6:30 am to 8:30 pm, and daily pujas and annual festivals are being celebrated here marvellously. Panguni, Vaikasi and Aadi month Utsavams are considered as famous festivals in this temple. As per ancient legend, Sundarar, one of the famous Nayanmar saint, came to the present day Virudhachalam, which was previously called as Thirumudukundram, during his old age. He sang beautiful songs in praise of Lord Vriddhagiriswarar, a form of Lord Shiva. Shiva was very much attracted with his divine songs, and hence, he asked Lord Muruga to make Sundarar to sing again. Muruga took the form of a hunter, and went to the Kolanji forest where Sundarar was passing by the way. Muruga who was in the form of a hunter took away all the belongings of Sundarar, and asked him to again visit Virudhachalam. Sundarar realised about the divine drama played by the father and the son, and happily agreed and returned to Virudhachalam temple and again sang in praise of Shiva. Since Lord Muruga visited the Kolanji forest, a temple was built for him in that place, and he was also known as Lord Kolanjiappar, and the temple was also known as Sri Kolanjiappar Temple.

In this temple there are separate shrines for Murugan’s divine attendants, Idumban and Kadamban, and there is also a separate shrine for Sri Siddhi Vinayakar.

The consecration ceremony took place in the year 2010, with the help of the donations granted by the devotees of Lord Muruga. We can also see lot of tourists in this temple, due to its rich art and architecture.

The temple provides Annadanam in the noon regularly to the devotees in a pleasing manner.

There is an old saying in Tamil about this wonderful temple, “Oh Lord Kolanjiappa, please provide us at least some quantity of kanjiappa!” which means requesting the great Lord Kolanjiappa to provide food to all of his devotees.