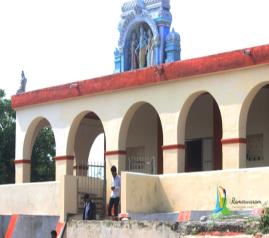 The Kothandaramaswamy Temple is located at Rameswaram, Tamil Nadu, is a sacred temple dedicated to Lord Rama. The temple contains deities such as Rama, Lakshmana, Sita, Hanuman and also Vibhishana. The temple attracts large number of tourists especially during the Rama Navami Festival day, and the area is surrounded by sea. The temple is believed to have been built before 1000 years ago, and in this temple, the deity Rama appears with a bow (Kothandam), and hence the temple was named as Kothandaramaswamy Temple.

At the present place of this temple, during the Treta Yuga, Vibhishana, the younger brother of Ravana, had sought refuge to Lord Rama. At the present place of the temple, Lord Rama performed the coronation ceremony for Vibhishana in order to make him as the king of Lanka. Famous saints like Swami Vivekananda have visited this temple and worshipped Lord Rama. Rameswaram is famous for performing Pitru Tarpana Rituals, and since Lord Rama himself visited Rameswaram and worshipped Lord Shiva, those who visit Rameswaram are suggested to visit this temple also, in order to get relieved from their various doshams.

Lord Rama and his mantra is very famous, and he has been praised by his devotees since Vedic times, and by reciting the “RAMA MANTRA”, “JAI SRIRAM”, we are getting peace of mind. Great saints like Sadashiva Brahmendra and Kanchi Paramacharya had insisted the people to chant the Rama Mantra and to visit the temples of Lord Rama.  We can also find lot of big and small Rama temples situated throughout India. Whoever chants the Rama Mantra, instantly they would get the blessings of Lord Hanuman, since he would always remain in the souls of the staunch devotees of Lord Srirama. The significance of Lord Rama was mentioned in almost all the holy texts of Hinduism. Hence let us allocate some time regularly, for worshipping Lord Rama.