In: Buddhist Pilgrimage, Travel
With: 0 Comments

Lumbini is one of the most famous Buddhist pilgrimage centres as it was the birth place of the Buddha. It is considered as the Mecca of every Buddhist. The Parinibbana Sutta identifies it as one the most important places which Buddha himself identified and exhorted his devotees to visit to help them in their spiritual quest. 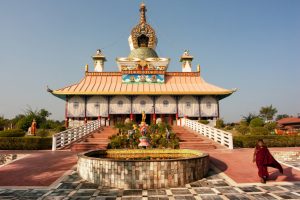 Lumbini is situated 22 kms from Bhairahawa in modern day Nepal at the foothills of the Himalayas. In the time of the Buddha, Lumbini was said to be a beautiful garden full of shady and green Sal trees. These tranquil environs were owned by both the Shakya and the Kolia clans. Its beauty is described in Sanskrit and Pali literature. Buddha or Siddhartha Gautama was born to King Suddhodhana of Shakya dynasty and Queen Maya Devi. Queen Maya Devi was on her way from Kapilavastu to her parent’s home in Devadaha when she felt labour pains and got down from the palanquin and sitting under a sal tree in the garden of Lumbini gave birth to a child on a full moon day in the year 642 BC in the month of May and the child Siddhartha Gautama later became the future Buddha. On the night of her conception Maya Devi who it is said will be the mother of all the thousand Buddhas of this aeon dreamt that a great white elephant had entered her womb and the earth trembled six times. In the manner of all Boddhisattvas in their final birth the Buddha is said to have sat cross legged for the whole time within the womb. Legend states that all Buddhas are willed to be born in a forest grove while their mother remains standing. Buddha is said to have been born from her right side and immediately took seven steps from which lotus flowers sprang up in each of the four directions and he is said to have proclaimed that he was the Buddha and it was his last birth. It is said that the Gods themselves came down to bathe him. Buddha lived in Kapilavastu until his 29th year mastering all fields of arts and education until he left home in search of Truth. The Sculpture of Buddha’s birth

The Malla Kings of the Naga dynasty in the Karnali Zone of Nepal from the 11th to the 15th century installed a bas relief of the Nativity Scene. It depicts Queen Maya Devi with a newborn child standing upright on a lotus petal with an oval halo around his head while two celestial figures are pouring water and lotuses from heavenly vessels. Maya Devi has her right hand holding on to the branch of a sal tree. The original sculpture was restored by archeologists. Both Hindus and Buddhists worship this Nativity scene.

Lumbini was a flourishing village when Emperor Ashoka visited the place in 249 BC. He constructed four stupas and a stone pillar with a figure of a horse on top. The stone pillar bears an inscription which reads that Ashoka declares Lumbini a tax free status in honour of the birth of the Buddha. It is 6m high and half of it is beneath the ground. It is to the west behind the Maya Devi temple. When Hsuan Chwang the Chinese traveller saw it the pillar was destroyed by lightning but the inscription remained and the site could be identified as Lumbini. By the side of the Ashoka pillar is a river which flows southeast called the ‘Ol’ River.

Immediately before his birth legend says that Buddha was Lord of the Tusita heaven. There he is said to have resolved to be born for the last time and attain enlightenment and show the world the path to transcend suffering and redeem oneself. He is said to have placed his crown on the head of Maitreya his successor and descended from heaven to the world of man. 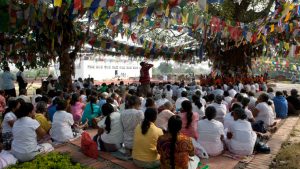 It is said that after centuries of neglect in 1895 a famous German archaeologist Alois Anton Fuhrer discovered the great pillar, a brick temple and a sand stone sculpture depicting the scene of Buddha’s birth after further exploration and excavation of the surrounding areas. To the South of the Maya Devi temple there is a famous bathing ghat known as Pushkarni where some accounts state that Maya Devi is said to have bathed there before her delivery.

The monastery has been built on the same lines as the other Buddhist temples built in Nepal with exquisite architecture on its walls. There are beautifully depicted murals in the middle hall resembling the medieval periods.

Lumbini has been declared a Unesco World Heritage Site and is bordered by a large monastic zone divided into Eastern and Western Zone where only monasteries can be built. Building of shops, restaurants and hotels are not allowed here. The Eastern zone has the Theravada monasteries while the Western zone has the Vajrayana and Mahayana monasteries. Lumbini has a sacred Bodhi tree, ruins of ancient monasteries, the Ashoka pillar, an ancient bathing pond and the Maya Devi temple where the precise place of birth of Buddha is located. Chanting and meditation are performed by pilgrims of various countries from early morning to evening. Since Hindus regard Buddha as one of the incarnations of Lord Vishnu, thousands of Hindu pilgrims come to celebrate Buddha Poornima on the birth anniversary of the Buddha every year. 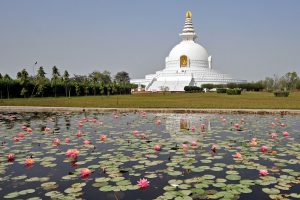 The Nepali Government has introduced a 100 rupee Nepali note featuring Lumbini and a portrait of Maya Devi in silver metallic finish on the front. The note is also said to have a black dot to enable the blind to recognise it.

How to get there

Air– The nearest airport is the Gautam Buddha Airport in Bhairahawa which is 22 kms from Lumbini and well connected to Kathmandu airport. There are about 22 international airlines which connect Nepal to other destinations in Asia and the Middle East.

Rail-Gorakhpur is the nearest railhead which is 122 kms from Lumbini.

Road– Bhairahawa is connected to Lumbini by a good road network and also to other cities of Nepal. Lumbini is a 10 hour drive from Kathmandu and a 45 minute drive from Bairahawa.

There are a number of hotels in Bhairahawa but it is advisable to stay in Dae Sun Suk Gu Sa monastery in the village.

The sacred place of Lumbini is visited by devotees not only for spiritual enlightenment but also for the solitude and bliss that can be obtained at such a peaceful and uplifting place. It is said that Kapilavastu and its splendour did not last long as it was destroyed by King Vaidraka a rival King and subsequent Chinese travellers found only ruin and desolation but there were signs of Stupas among the ruins. Persistent efforts by Governments and devotees have led to Lumbini being regarded with great respect and reverence by all in the annals of Buddhist history.