Maa Devi Vajreshvari Shakthi Peeth is the temple where Sati’s left breast had fallen. Here Devi Sati is worshipped as Vajreshvari (Goddess of lightning) and Lord Shiva as Kalbhairav. Vajreshvari is also known as Vajrabai or Vajrayogini.

Maa Vajreshvari temple is located on a mountain near Chamunda Devi temple in Nagarkot, Kangra district of Himachal Pradesh. The temple is about 16 kms from Nagarkot. Nearest railway station is from Pathankot which is about 94 kms.  Several state government run bus services are easily available to reach the temple. Nearest airport is Gaggal Airport which is 10 kms from Nagarkot.

Kangra known for its natural scenic beauty is a tourist’s paradise. Kangra’s landscape dotted with tea gardens provides an exhilarating view to the tourists.

There are several temples such as Jwalaji Mandir, Chamunda Devi Temple, Chintapurni temple, Baba Baroh Masroor temple, built by Pandavas, Baijnath temple and Bhagsunag temple. There is also Gopalpur Nature Park and Kangra Fort which are other tourist attractions. Maharaja Sansar Chandra Museum adjoins the Kangra Fort. Mcleodganj near Dharmshala is home in exile of The Dalai Lama.

Vajreshvari temple is an ancient temple believed to be more than 1000 years old. The temple built during the 11th century in the Shikara style has elaborately carved Shikaras with wooden chhattries and stands on a platform.

The temple resembles a fort with huge stone walls surrounding it. There is also an image of goddess Durga with four arms, sitting on a lion and Vishnu in Vaikunta form on the exterior walls of the temple. There are also images of several gods and goddess carved on the pillars of the temple. There is a drum house or Nagarkhana in front of the main gate entrance which resembles the entrance to Bassein fort.

There are two small shrines on either side of the Vajreshvari temple. The temple was considered to be the wealthiest as it had tonnes of gold and many silver ghantas or bells. The temple was looted five times by Md Gaznavi and several other Muslim rulers also invaded the temple. Finally in 1905, the temple was completely destroyed by a powerful earthquake and the new structure was rebuilt by the government in 1930. The temple structure built during the British era has three domes representing the architecture of different religions of Hindus, Muslims and Sikhs. Devi is worshipped in pindiform (saligram) at this temple. There is also a small Bhairav temple in the temple complex. An image/idol of Dhayanu Bhagat in front of the main deity is also present. Dhayanu Bhagat is known for his Bhakthi to goddess. He had offered his head to the goddess during Akbar’s reign.

Thousands of years ago, in the region of Vadvali, a demon named Kalikala or Kalikut troubled sages, humans and waged a war against gods. Sage Vasishta decided to take on the demon. He performed Chandi Yagna to appease Devi. An Aahuti (offering of ghee in Yagna) was not offered to Indra, the king of devas. Lord Indra was enraged and he hurled hisVajrayudha (a powerful weapon) at the yagna. The gods and sages were petrified at the destruction the weapon could cause and prayed to goddess Parvati to save them. The goddess appeared before the sages and then swallowed the vajrayudha and killed the demons. Lord Rama requested Devi to stay at Nagarkot and be known as Devi Vajreshvari. Thus a temple structure was built at Nagarkot.

Another reference is that the Lord of the Devas, Indra and other gods requested Parvati to slay demon Kalikala. Goddess Parvati agreed to slay the demon but at the right time. Until such time she ordered them to fight the demon. Then a battle ensued between the Devas and the asuras, in which the demon Kalikala swallowed all the weapons thrown at him. Finally, as a last resort, Indra threw the most powerful weapon, Vajrayudha, at Kalikala, which the demon broke into pieces. From the pieces, emerged Devi Parvati and killed the demon. Thus goddess Parvati came to be known as Vajreshvari and a temple was built at Nagarkot.

Another reference is that the ancient temple was originally built by Pandavas during the Mahabharata time. Goddess Durga appeared in the dreams of Pandavas and asked them to build a temple for her in Nagarkot where she was residing and assured them that she would protect them. Pandavas built a magnificent temple for Durga Devi in Nagarkot village.

Another puranic reference is that the demon Jalandhar is buried at the place.

Another reference is that Goddess Vajreshwari was injured in the battle to slay the demon Mahishasur. Butter was applied to these injuries for quick healing. The tradition of applying butter (to the goddess) is celebrated on Makar Sakranti every year for a week.

Goddess Vajreshvari is offered Bhog daily. However, the bhog is offered one part each for MahaLakshmi, Mahakali and MahaSaraswati. In front of the main deity is an oath stone where Dhayanu Bhagat had offered his head out of Bhakthi to the goddess. The oath stone is called as Dharam Shila.

Devotes offer Pan (Beetle leaves and arecanut), Supari, Dhawaza, Narela loung, elaichi (spices) to the goddess. Sometimes devotees cut off their tongues and offer to the goddess. The tongues sometimes grow on the spot.

A fair is held on Amavasya in Chaitra masa during which lamps are lit and the goddess is worshipped. The fair commences on the 14th day of Chaitra Krishna Chaturdashi (the waning moon) with the traditional worship to goddess Vajreshvari. A palanquin (Palaki) with the image of the devi is taken out on the first day of Vishaka month.

The other festivals celebrated at the temple are Kojagiri Poornima on the full moon day of Ashvija masa (Sep- Oct), Lord Shiva worship during Shravana masa(July-Aug), Diwali, Holi, Datta Jayanti, Hanuman Jayanti and Godhade(birthday of the saint Godhadebuwa). 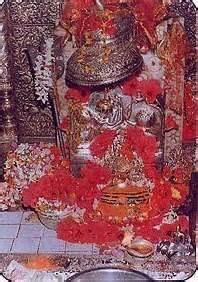 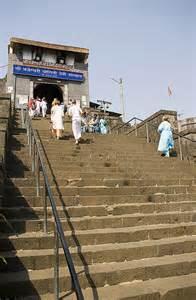 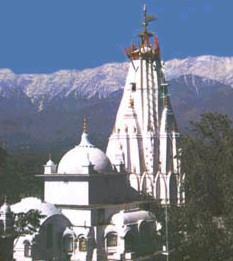