Panch Sagar Shakthi Peeth is the place where Devi Sati’s lower teeth fell. Here Devi is worshipped as Maa Varahi and Lord Shiva as Maharudra (The Angry One.)

Kashi Vishwanath Temple, Durga Temple, several Ghats along the banks of the River Ganga, Bharath Mata Temple are some of the places of tourist attractions. 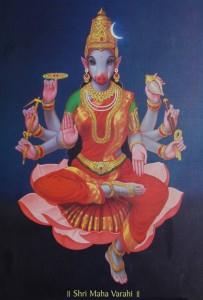 Maa Varahi is also one of the Saptamatrikas.  Goddess Varahi is the feminine energy or shakthi of Varaha, the boar Avatar of Lord Vishnu. Goddess Varahi has the head of a sow. She has a discus (chakra), conch, sword, in her hand. Maa Varahi is worshipped by Shivaites, Vaishnavites and as a Shakthi peeth.

According to one reference Goddess Varahi was created by Lord Shiva from the incarnation of Lord Vishnu (Varah- boar form) to kill a demon. According to Kashi Khand, Lord Shiva sent sixty four yoginis to Kashi to disrupt the governance of King Divodas. But the yoginis, were so enthralled by the beauty of Kashi that they decided to settle down in Kashi. Varahi is one of them.

The temple is open from 5.30 am to 7.30 am only and remains closed the entire day. The Aarti is performed in the morning, during which the main door is closed. However, if a devotee happens to be inside, then the devotee gets to see the aarti. Once the aarti is performed, then the temple is open for darshan for some time and then the door is closed. Varahi Devi is located below the ground level. A marble slab is opened through which the devotees are allowed to have the darshan of the devi. Only the priest is allowed to enter the underground. The devi is worshipped in the night according to Vamamarga Tantric practices.