Godavaritir or Sarvashail Shakthi Peeth is the place where Sati’s Left Cheek fell. Devi Sati is worshipped as Maa Vishweshwari or Vishweshi or Rakini or Viswamatuka (the mother of whole world/universe) and Lord Shiva as Vatsnabh or Dandapani(one who holds a staff).

Godavaritir or Sarvashail Shakthi Peeth is located at Kotilingeshwar temple on the banks of River Godavari, near Rajamundry, Andhra Pradesh. Rajamundry is well connected by buses from all major cities like Annavaram, Vishakapatnam, Hyderabad, Vijayawada, Chennai, Bangalore, Gwalior, Kolkotta, Jabalpur etc. The city is well connected by railways. Rajamundry Railway station is one of the biggest railway stations in Andhra Pradesh. Rajamundry airport is situated near Madhurpadi, 18 kms from the city.

Other places of tourist interest:

a) Kotilingeshwar temple is a major tourist attraction.

b) Annavaram Satyanarayana Swamy temple is about 70 kms from Rajamundry

e) Sir Arthur Cotton Musuem: Sir Arthur who constructed the Dowleswaram Barrage is revered as Cotton Dora. He is known for his irrigation engineering which converted the River Godavari into a fertile water source.

There are many temples on the banks of the River Godavari which are a major tourist attraction besides, Kambala Park, River Bay resort, Chitrangi Palace and Freedom Fighters Park.

The Temple and the River

Godavaritir or Sarvashail Shakthi Peeth is an ancient temple. The temple’s architecture is splendid. The temple looks massive, as the temple’s gopuramis at a great height. The gopuram has several images of gods and goddess sculpted on it. River Godavari is one of the sacred rivers. Bathing in the River Godavari is said to wash away the sins of the devotees. Rajamundry is considered as Dakshina Kashi. Balasaheb (about 5000 years ago) and Chaitanya Mahaprabhu have bathed in the River of Godavari. River Godavari (1465 kms) is the second longest river next only to the River Ganga.

There is one puranic reference about Sage Gautama who lived on the Brahmagiri hills at Trayambakeshwar with his wife Ahalya. Sage Gautama, once tried to chase away a cow which ate all the stock of rice in his granary. As the sage was chasing the cow with Durbha grass, the cow fell dead. The sage meditated upon Lord Shiva and wanted to rid himself of the Gohatya. (act of killing the cow). He requested Lord Shiva to bring the Ganges to purify his hermitage. Lord Shiva was pleased with the worship of Sage Gautama and appeared as Triambaka and brought down River Ganges to Trayambakeshwar. The river is also known as Gautami, as it was brought down by Sage Gautama. The river gets the name Godavari, as the river was brought down to absolve Sage Gautama from the sins of “Gohatya”.

Navaratri during Ashwija masa (Sep- Oct) is celebrated with great fervour. Special poojas and yagnas are held during Durga Ashtami. Fruits and anna bogh are offered to the deity. Every twelve years once, Pushkaram fair is held on the banks of the river Godavari. Millions of people from all over the country take a dip in the river for cleansing their sins. 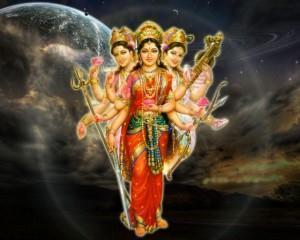