Lord Shiva, the greatest and most powerful god of the Hindu pantheon, is manifested in his various aspects at thousands of Indian temples. Lord Shiva is most popularly portrayed in his Linga form. Especially, the 12 Jyothirlingas located at various places are much esteemed as embodiments of his endless and matchless power as the Lord of all lords.

There is tremendous importance accorded to the 12 Jyothirlingas in Hindu religion as they are the swayamabhu or self-manifested form of Lord Shiva, the Destroyer of the Universe. The most venerated Sri Mahakaleshwar Temple – also known as Indrapuri Amaravati and Avantika – in Ujjain is one amongst them. 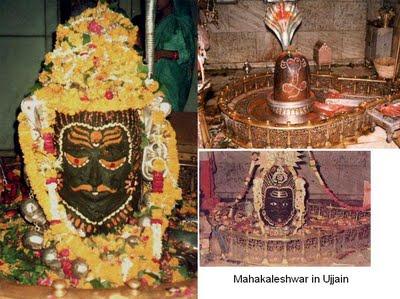 The temple is the abode of Lord Shiva where he rests in his Linga form symbolizing his incarnate power on earth. Since Lord Mahakaleshwar Temple is situated in the ancient city of Ujjain, devotees take the opportunity to worship Lord Mahakaleshwar with the holy water of River Kshipra.

The idol of Lord Mahakaleshwar here is called Dakshinamurti, means the one facing the east. This unique feature of the temple is preserved by the tantric Shivnetra tradition. Above the shrine of Lord Mahakaleshwar, the idol of Omkareshwar Mahadev is sanctified. Other three prominent images inside the sanctum sanctorum are –

o   Lord Ganesha – in the west

o   Goddess Parvati – in the north and

o   Lord Karttikeya – in the east

Located in the third storey is the idol of Lord Nagchandreshwar which is open for devotees only on the day of Nag Panchami, the fifth day of waxing fortnight of Shravana month (July/August). The Linga is quite bigger in size with a silver snake coiled around its body.

Amongst the 12 Jyothirlingas, Lord Mahakaleshwar is the only one which is recognized as the Lord of Time and Death – ‘Kaalo ke kaal Mahakal’.

As mentioned in ancient Hindu scriptures, the temple of Lord Mahakaleshwar was built by Prajapati Brahma himself.

The Mahakal Temple in Ujjain is said to have been renovated and restructured by various successive dynasties from Shunga, Kushana, and Satavahana to Gupta, Parihar, and Parmara. Most famously Iltutmish invaded and destroyed the temple in the 1235 AD and later a 5 storey temple was restructured during the 18th Century on the primordial Mahakaleshwar temple. Before the demolition of the temple by Iltutmish, the ancient temple had a well known saffron-yellow colored crest.

In the year 1736 AD, the temple reconstruction was conducted by Ramchandra Baba Shenvi who was appointed as Subedar during the reign of Ranoji Scindia. Later, in the 18th, 19th and 20th centuries, Madhavrao (Shreenath Mahadji Shinde Maharaj), Maharani Bayzabai Raje Shinde and Maharaja Scindia Alijah Bahadur respectively made prominent changes in the temple structure.

Such was the eminence of Lord Mahakaleshwar Temple that till 1886 AD major cultural and religious programs of the Gwalior Riyasat used to take place at the temple. After Indian Independence, the Municipal Corporation of Ujjain replaced the Dev Sthan Trust and gained control over the temple management and at present the temple is managed by the district collector.

The legend of an ancient king named Chandrasen is linked to the temple of Lord Mahakaleshwar. As per the legend, the king was an ardent devotee of Lord Shiva and worshiped his Lord all the time. Once when the king was chanting prayers and was deeply meditating on Lord Shiva in the temple, a farmer’s son named Shrikhar overheard his prayers and headed towards the temple. However, he was barred from entering the temple by its authorities and was left in the outskirts of the town near the River Kshipra.

During this time, Chandrasen’s greatest rivals, King Ripudaman and King Singhaditya, plotted an attack on Ujjain to plunder all its wealth and riches. Since, Shrikhar was residing in the outskirts of the town, he along with a priest named Vridhi were the first to get premonitions of the impending danger. However, it was too late to approach King Chandrasen and his authorities as the rivals had already started invading upon the land with the help of the mighty demon Dushan.

Meanwhile, both Shrikhar and Vridhi kept on praying to Lord Shiva with their complete devotion. Seeing this, Lord Shiva appeared in the form of Mahakal to defeat all the antagonists. After gaining victory over the enemies, Mahakal or Mahakaleshwar stayed back at Ujjain in his ‘Light’ form as ‘Mahakal’ or ‘Mrityunjaya’ – a Linga with the combined powers of Lord Shiva and his consort, goddess Parvati.

Simultaneously, the Lord also declared that all those who would worship him in his ‘Mahakal’ or ‘Mrityunjaya’ form would set themselves free from death and maladies as Lord himself will endow all treasures and happiness upon them. Henceforth, Mahamrityunjaya puja is being performed in the temple for over a crore times every year.

After the temple was demolished by the Muslim invaders, it was rebuilt by the Sindhias in the Central Indian architectural style which is equally traditional and authentic. The temple is a five-storeyed structure located at the southern end of the town. Beautiful motifs and thematic structures adorn all the sides and corridors of the edifice. The ruined ancient shrines are preserved in the courtyard of the temple. Pierced balustrades embellish all five storeys of the edifice. Again, the heavily ornamented balcony roofs of the temple are suggestive of conventional Rajput architectural style.

Marble columnades on the screens and pavilions, stretching towards the main Linga inside the sanctuary clearly define the Mughal style of architecture in this ancient Hindu temple. The Garbha Griha or underground sanctum where the main deity resides is mostly lighted with beautiful brass lamps, and scriptural finery graces the shikhara of the temple.

It is said that Mahakal or Mahakaleshwar temple is home to around 33 crore Hindu gods and it is the one and only temple amongst the 12 Jyothirlingas which has multiple shrines surrounding its vicinity. These are as follows –

Major Shiva festivals including Shivratri are celebrated with great pomp and show at the temple.