The Parvati Peeth located in the Holy cave of Amarnath is one of the important Shakthi Peethas. Sati Devi’s throat fell here. Sati is worshipped as Mahamaya (the Great Illusion) and Lord Shiva as Trisandhyeshwar. At this Shakthi Peeth, Devi’s ornaments and body part is worshipped.

Amarnath Shakthi peeth is located in Kashmir, India. The cave is situated at an altitude of 3,888 m (12,756 ft), about 141 km from Srinagar. There are two routes to reach Amarnath cave. One route is through Baltal which is about 70 kms from Srinagar. The other route is from Phalgam which is about 94 km by bus. From Pahalgam, the route goes through Chandanwari, Sheshnag and Panchatarani. Phalgam route is relatively easy compared to the route from Baltal. From Chandanwari, located at an altitude of 9500 ft, another 16 kms has to be travelled by foot to reach the cave temple. Every year the state government organises an annual Amarnath Yatra to facilitate thousands of pilgrims who arrive from all over the country to have a darshan of the Ice Linga. The cave is open for darshan during the month of Ashada to Shravan Poornima (July- August) for a period of 45 days.

There are several temples located near Amarnath cave.

Discovery of the Lingat

A shepherd by name Buta Mallik discovered the holy Amarnath cave in 15th Century. A saint gave Buta Mallik a bag full of coal which later turned out to be a bag full of gold, on the shepherd reaching home. The shepherd ran towards the saint to thank him, but then the saint had disappeared. Instead, he found the holy cave and a Shiva linga, about which he informed to the villagers.

Amarnath cave is one of the holiest shrines in India dedicated to Lord Shiva. The cave is surrounded by snowy mountains. Inside the cave is the ice stalagmite* resembling a Shiv Linga which swells/increases during May to August and decreases thereafter. It is said that the size of the lingam in the cave changes depending upon the moon phases and is at its best height during summer. The linga is said to expand and contract depending on the seasons.

*Stalagmite is a type of rock formation that grows vertically from the floor due to the freezing of water drops from the roof of the cave to the floor. The cave is about 15 ft in ht and 60 ft in length and breadth. The cave is rectangular in shape.

The cave is said to be about 5000 years old. There is a reference about King Aryaraja dating back to 300 BCE who used to worship a ling formed in ice in Kashmir. The book Rajatarangini (is a historical chronicle written in verse form in sanskrit particularly about the kings of Kashmir) has references to Amarnath or Amareshwara. Suryamathi, a queen gifted Trishul, banalingas and other sacred emblems to the temple in 11th Century AD.

According to one reference/narration Lord Shiva led an ascetic life after the death of Sati. Then Sati was reborn as Parvati, the daughter of Himavan. As Parvati knew about her earlier life as Devi Sati, Parvati did severe tapas to reunite with Lord Shiva at Amarnath. Devi Parvati then joins Lord Shiva as Mahamaya at Amarnath.

Along with the Ice Linga, there are two other lingas representing Devi Parvati and Ganesh.

Another narration/reference is that Lord Shiva explained the secret of immortality and creation of Universe to Devi Parvati which is as follows:

Once Devi Parvati wanted to know when and why Lord Shiv was wearing the Mund Mala (chain worn around Lord Shiva’s neck made of beads of head) Lord Shiva replied that each time Parvati was born, another bead of head gets added to his mala (chain). Devi Parvati was astonished at this and asked Lord Shiva that though she was going through the cycle of birth and death time and again, how come He was immortal. Parvati pleaded with Shiva to reveal the mystery of eternity. Lord Shiva chose a place where no living being could listen and thus chose Amarnath cave. As Lord Shiva started towards Amarnath cave, He left His Nandi (bull which He used to ride) at Phalgham (Bali gaon). At Chandanwari, He released Moon from his Hair( Jatta). He released the snakes on the banks of Lake Sheshnag.  Lord Shiva left Ganesha, his son at Mahagunas Parvat (Mahaganesh Hill). Finally Lord Shiva left Panch bhootas or five elements (Earth, Water, Air, Fire and Sky) which make a living being at Panchtarni.

It is said that Lord Shiva and Parvati did Tandav nritya as a symbol of sacrificing the Panch Boothas.

After leaving all these behind, Lord Siva then entered the Holy Amarnath Cave along with Devi Parvati. In the cave, Lord Shiva took Samadhi on the Deer Skin. As Lord Shiva wanted the immortal tale to be kept a secret, He created a Rudra named Kalagni and ordered him to spread fire to eliminate every living thing in and around the Holy Cave. After this, He narrated the secret of immortality to Devi Parvati. But, there was one egg which was lying beneath the Deer skin which remained protected. It was believed to be non living besides, being protected by Shiva-Parvati Asan (Bed). The pair of pigeons which were born out of this egg became immortal after having heard the secret of immortality (Amar Khatha) from Lord Shiva.

Many devotees who visit Amarnath cave report about having sighted the pair of pigeons en route to the Ice-Linga.

Another narration/reference is about the cave is that the Kashmir valley was under water. Sage Kashyap drained the water through number of rivers and rivulets. Another reference is that Sage Bhrigu visited The Himalayas during that time and he was the first to visit the Amarnath cave.

The most important festivals celebrated at Amarnath Shakthi Peeth are Nagpanchi (in the month of Shravan), Teej festival and Ganesh Chaturthi in the month of Badrapada.

Navaratri is celebrated once in March- April and then in Ashvija month (September- October) for nine days. Devotees observe fast during the nine days and worship Mata Mahamaya. A grand celebration and worship is held during Navaratri.

Most important fair is Shravani fair held in the month of July- August. 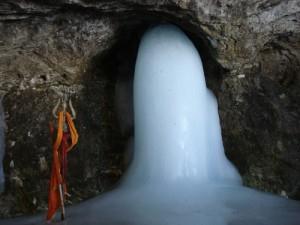