Sri Mallikarjuna Swamy Temple is located in Srisailam or Shrishailam Mountain on the banks of River Krishna in Kurnool, Andhra Pradesh. The temple is a picturesque edifice located at the peak of Nallamalai Hills, Srisailam. The temple is home to one of the 12 Jyothirlingas of Lord Shiva who is here propitiated as Mallikarjuna along with his consort, goddess Bhramaramba.

Indian Scriptures describe Srisailam as one of the ancient mountains in the Indian subcontinent which has been in existence since the times of Vedasand long before the Aryan and Dravidian settlements in India.

Sri Mallikarjuna Swamy Temple attracts thousands of tourists every year as the place is considered an ideal spiritual destination which brings tranquility and solitude unto its visitors. Srisailam is an extremely popular mountain with great mythological importance. Literally, ‘Sri Sailam’ means ‘The Esteemed Mount’ and the mountain has multiple names including Sriparvatha, Srinagam, Sirigiri, Srigiri and Siridhan. In addition to Kasi and Arunachalam, Srisailam is amongst those three holy places in India which offer an instant salvation to the devotees. In the great epic Mahabharata, Srisailam Mountain is referred to as ‘Sri Parvata’ meaning ‘the blessed hill’. 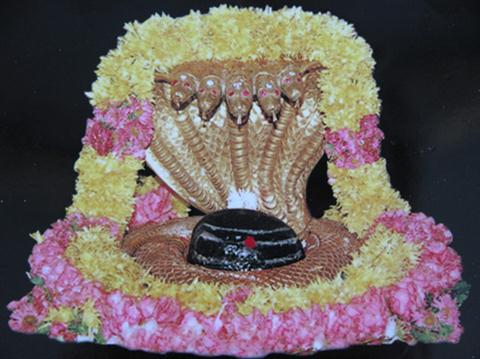 Both the presiding deities in the temple i.e. Lord Mallikarjuna Swamy (as one of the 12 Jyothirlingas) and goddess Bhramaramba Devi (as one of the 18 Mahashaktis) are self-manifested. Mallikarjuna, as the name goes, refers to Shiva and Parvati in their Arjuna and Mallika forms respectively. The rare combination of Jyothirlinga and Mahashakti at Srisailam is the only one of its kind in the world.

Inside the temple, there are two prominent Lingams and both are called Mallikarjuna Linga. The newer Lingam is installed inside the chief Mallikarjuna shrine and is adorned with a silver plated Mandapam. This is, in fact, the main place of worship inside the temple where thousands of devotees congregate all round the year especially during the main Shiva festival, Shivratri, and also during the month of Shravana.

The older Mallikarjuna Linga is relatively smaller, situated in the southern part of the temple. The most interesting part about this shrine is that unlike other Shiva temples and Jyothirlingas, there is an abrupt absence of Nandi bull, the vehicle of Lord Shiva. The Lingam gives an appearance of that of a tree stub and is around 25 cm high and 30 cm in diameter. A number of other Lingams are also placed in separate shrines at southwest area of the main temple.

Lord Mallikarjuna Swamy is one of those temples in India which has risen itself above caste bias. People of all castes and creed are allowed to worship and perform Abhishekam and Archana to the main deity inside the temple, a custom which is quite unlikely to prevail in any other temple in the state of Andhra Pradesh. It is said that worshiping Lord Mallikarjuna Swamy is equivalent to performing the famous ancient Fire Sacrifice i.e. Ashwamedha Yagya.

o   There are quite a few legends associated with the Sri Sailam Mountain and Sri Mallikarjuna Swamy Temple. One legend says that that during ancient times, Parvatha, son of Silada Maharshi meditated on Lord Shiva and performed a very tough penance. Seeing Parvatha’s devotion for him, Lord Shiva granted him a boon and agreed to live inside the body of Parvatha. Following this event, Parvatha assumed the form of a gigantic Hill Sriparvatha on the top of which Lord Shiva resided as Mallikarjuna Swamy.

o   Another legend related to the origins of the temple is mentioned in Skanda Purana, and the two sculptures adorning the temple’s Prakara Wall support this legend. As mentioned in the story, Princess Chandravathi fled to the Srisailam Hill after his father made amorous advances towards her. Once, the princess saw a cow shedding its milk over a Shivlinga shaped rock. Later, the same night, she gained a psychic vision where she learnt that the rock was the self-manifested Linga of Sri Mallikarjuna Swamy and thus the princess started worshiping the rock and after sometime a temple was built and became one of the 12 Jyothirlingas.

o   Another legend says that when Lord Ganesha was married off before his elder brother Kartikeya, the latter got extremely infuriated and made his way downwards. He reached Kraunch Mountain and started living there. However, when Shiva and Parvati went there to console their loving son he left the place. Shiva stayed back there in his Jyothirlinga form as ‘arjuna’ along with his consort Parvati as ‘mallika’. It is said that merely by worshiping Sri Mallikarjuna Swamy from the mountain peak, one gets emancipation from the drilling cycle of birth and death.

o   Again, amongst the various Shivalingas present in and around the Mallikarjuna temple, the Sahasra Lingas are believed to have installed by Lord Rama and Panchapandava Lingas by Pandavas. Owing to this connection, several sculptures pertaining to various episodes from Ramayana and Mahabharata are seen carved in stone on the walls of the temple.

o   Another interesting legend says at Srisailam Hill, goddess Parvati acquired the name of Brahmaramba. As mentioned in some Puranas, goddess Durga arrived in the form of a Bhramar or bee in order to defeat a demon named Arunasur and thus the goddess got the name Bhramarambha Devi. Even today, visitors can hear a bee buzzing from a tiny hole of the Brahmaramba shrine.

o   Chenchus, the local tribes of Srisailam Hill have another legend related to the origins of the temple. In a series of unfolding events, Lord Shiva arrived at Srisailam Hill for hunting and fell in love with a Chenchu woman. The two of them got married and the wife would accompany her husband in his hunting expeditions. Hence, even today, Lord Mallikarjuna is more famously known as ‘Chenchu Malliah’ among these tribes. The whole episode is beautifully demonstrated in one of the temple’s prakara, where Lord Shiva is shown hunting a tiger with his spear while Parvati (dressed as a Chenchu woman) is accompanying him. Such is the legendary connection of this temple with all the Chenchus tribes that they are allowed to access every nook and corner of the temple, a phenomenon which is completely missing in other temples in Andhra Pradesh.

Salient features of the Temple

o   A gigantic idol of Nadikeswarar is installed at the centre mandapam surrounded by several pillars.

o   To the west of Iswar’s Shrine is located Amba’s shrine.

o   Around 116 inscriptions of great archeological value abound in the temple.

o   Located inside the temple are 12 precious marble pillars (Geetamandir) inscribed with the divine message of Shrimad Bhagavat Geeta.