Lord Nageshwar Temple located in Dwarka, Gujarat, is one of the 12 Swayambhu (self-manifested) Jyothirlingas of Lord Shiva. The temple is situated enroute Gomati Dwarka and Bait Dwarka Island on Saurashtra coast, Gujarat. Nageshwar Temple is an underground sanctum where the presiding deity is known as Nageshwar Mahadev.

In addition to Dwarka in Gujarat, Lord Nageshwar Temple is located in two more places including Almora in Uttar Pradesh and Aunda (Honda) Naganath near Kakaparti, Baidyanath.

The temple bears great mythological importance and it is believed that Lord Krishna used to pay his obeisance to Lord Shiva by performing Rudrabhishekam and in the later period Shankaracharya founded his Western Math here at Kalika Peeth.

Along with the main temple of Lord Nageshwar, a huge statue of Lord Shiva dwells here and upon entering the temple, all the devotees first make their way to the idol which is one of the largest and most beautiful Lord Shiva statues in India.

Literally, the word Nageshwar is given to the Lord of all Cobras (Naag) who is always found coiled around the neck of Lord Shiva. Hence, it is said that any person who prays at Lord Nageshwar Temple permanently attains a poison free mind and body. 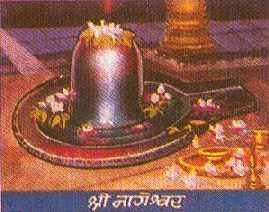 The presiding deity inside the temple is Nageshwar Mahadev. The south facing Shivlinga has the Gomukham which is east-facing, and there is a legend attached to it. As per the story, there was an ardent follower of Lord Shiva named Naamdev who was praying to Nageshwar Mahadev. While paying his obeisance, he was hiding the whole Linga, this made the other devotees standing behind unable to get the darshan of the Lord. When they urged Naamdev to move to some other direction, some furious devotees also dragged him towards the southern side and to their astonishment they found the Linga facing the south while the Gomukham remained eastward facing.

Another special feature of this Nageshwar Shivlinga is unlike round black-stoned Shivalingas, this one is made up of Dwaraka Shila, a raw yellowish stone with sharp edges comprising of small chakras. The Linga at Nageshwar is a three-mukhi Rudraksha which is around 40 cm high and 30 cm in diameter. Again, at Nageshwar one can also find goddess Parvati along with the Shivlinga.

The implication of Nageshwar Linga Puja is mentioned below –

–      Shiva is the personification of the snake-like Kundalini power which is nothing but the pure brilliance of the soul.

Thus, one may derive from the above combinations that Nagalingeswara is a complete embodiment of Spiritual Brilliance.

An interesting incident occurred during the early 18th Century which saved the temple from the invasion of the notorious Mughal emperor, Aurangazeb. During those times, Aurangzeb was on an invading spree and destroyed various Hindu temples. However, when the emperor approached Nageshwar temple, thousands of bees emerged from the temple compelling the emperor and his forces to leave the place. Later, the devotees rebuilt the broken temple.

The most recent temple was renovated by the Late Shri Gulshan Kumar – the Audio/Video Casseette tycoon. Gulshan Kumar once visited the temple and felt that unlike other 11 Jyorthirlingas, the Nageshwar temple is not well maintained; he took the initiative to renovate the temple. Unfortunately, due to Gulshan Kumar’s untimely death this elaborate project was later fulfilled by his son Shri Bhushan Kumar.

A gigantic statue of Lord Shiva, in meditating pose, welcomes all the visitors at Nageshwar Temple. The idol is around 125 feet in height and 25 feet in width. The temple is visible from a distance of around 2 Kilometers.

The structure of Lord Nageshwar Temple is built in accordance with the conventional architectural style of Hindu Temples found mostly in Western India. However, the temple structure is also based on the principles of Vastu-Shastra. The temple is Paschim-mukhi, the one facing the western direction and its planning is based on Sayanam posture which is analogous to the Human anatomy. Lord Hanuman and Lord Ganesha are carved beautifully in Gokhla style at the entrance porch of the temple. The three levels of the temple are as follows –

–      Ranga Mandap – Extremely spacious and 2 feet above the ground level

–      Antarala – The intermediate level where Shiva’s vehicle Nandi is located.

The height of the temple is 110 feet and the Shikharas and Samrans of the temples are decorated magnificently. It is believed that the stone structure of the Nageshwar temple was built by the Pandavas. The temple has large corridors surrounded by four strong walls; the eight pillars inside the temple support a spacious oval shaped hall. The main shrine of the Nageshwar Linga is placed in an underground Garbhagriha.

There is a famous legend which tells how Dwarka acquired its original name Darukavanam and Naganath or Nageshwar established his abode at this place.

Once, amidst the western forest lived a demon named Daruk along with his wife Daruka, also a demon. Due to the blessings of goddess Parvati, Daruka had become extremely obstinate and proud. Eventually, both Daruk and Daruka started destroying Hindu rituals performed in and around the place. During the same time, a great devotee, Supriya, and his thousands of other fellows were captured and imprisoned by Daruk. While in prison, Supriya would perform all the Shiva Puja rituals by wearing Holy Ash (Bhasma), Rudrakshas and chanting the most influential Shiva Mantra ‘Om Namah Shivaya’. Upon seeing Supriya’s unconditional devotion for him, Lord Shiva appeared at the place and a beautiful temple and Swayambhu (Sef-menifested) Jyothirlinga also got installed there. Shiva defeated the demons and thus the place became famous as Darukavanam while the Linga began to be known as Naganath or Nageshwar.

There is another legend associated with the temple history. During the Dwapar Yuga, Bhima of Pandava fame once saw a river full of milk. When he told his elder brother Dharmraja Yudhishtira about it the five Pandavas unearthed a Swayambhu Linga from the middle of the river where Lord Nageshwar Temple was later built.