Nalhateshwari temple is one of the important Shakthi Peetas where Devi Sati’s vocal cord has fallen. Nala” or Nal means cord in Bengali. Thus the shakthi peeth is known as Nalhateshwari. Here Sati is worshipped as Kalika and Lord Shiva as Yogesh.  It is also believed that Devi’s “Lalat”, or forehead fell here.

Nalhateshwari temple is located in a small town Nalhati, in Birbhum district of Murshidabad, West Bengal. The temple is on a small and beautiful hill. It is 16 km from Ram­purhat. Nalhati town is well connected to Jharkhand, Bihar, North Bengal and South Bengal. The nearest rail connectivity to Nalhati junction is 9 km from Howrah. From Nalhati junction, the temple can be reached by walk. The nearest airport is Dum Dum from Kolkotta which is 194 kms. The bus route is through the Panagarh-Moregarm highway. The nearest bus station is Nalhati bus station. Several buses ply to the temple.

As Nalhateshwari goddess takes the Kalika form, the deity is in Ugra Roopa in the temple. The idols of Kalika and Yogesh are atop a small hill in a temple. The goddess is adorned with red hibiscus flowers, red sindhoor and a red dress. The deity is adorned with golden crown, three golden eyes, has a trishul in one hand. The goddess has a beautiful silver arch on her crown with the images of Maa Durga, Maa Kali and Lord Shiva engraved on it.

The temple was first built by Rani Bhabani over Sri Sri Iswari Parbati Mata Peeth. Rani Bhabani was very well known for her charitable and religious deeds. The present day temple and Dharmashala is built by Maharaja Ranjith Singh of Nashipur in 1890.

Navaratri celebrated during the month of September or October (Ashwija masa) is an important religious festival at the holy place. Special pujas are held during Kali Puja and on Amavasya (new moon) along with Yagnas. Special pujas are also held on every Tuesday during Jhesta Masa( Mid May- June). Aarti with 108 lamps made of pure ghee is done on every Saturday which is a very beautiful sight to see.

Navaratri fair is celebrated in April. There is also a huge banayan tree to which people bind red and yellow threads for fulfillment of their wishes. 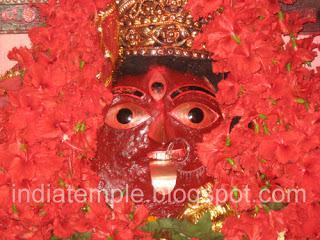