Also known as Jata Shankari, the River Narmada is believed to have originated from the Jata of Lord Shiva. All along the vicinity of the river, the worship of Shiva is very much prevalent, so much so that even the rocks found on the river bed are revered as Shivalingas. Even the nearby cities such as Omkareshwar, Mahadeo and Maheshwar are all named after Lord Shiva. The River Narmada is also worshipped as the mother and is believed to be so auspicious that even the sight of the river is believed to cleanse the souls of the worshipers.

As per legend, Ganga visits the river annually, disguised as a black cow, to cleanse herself of all her accumulated sins. The river also provides ideal conditions for the thriving of hardwood type of vegetation. An abundance of teak vegetation can be found all along the banks of the river. The very famous Chausath Yogini (sixty four yoginis) temple can also be found here. The temple essentially represents the attendants of Goddess Durga.

The city of Jabalpur is situated 10 km from the river, atop a rock basin. The city is named after the famous saint Jabali and is very famous for the marble rocks found here. The city is also extremely popular for the picturesque landscape and natural features. The rich black cotton soil of the region is very much favorable for agriculture.

The River Narmada originates from the Narmada Kund, Amarkantak Hill. The hill is located in the Anuppur district of Madhya Pradesh and the river descends from the hill upto the Kapildhara falls and the ruined palaces of Ramnagar.

Besides the numerous references in the Ramayana, Mahabharata and the Puranas, the River Narmada also finds mention in the works of Ptolemy. The Greco-Roman astrologer and geographer mentions the river as Namade. The Rewa Khand of the Skanda Purana and the Rewa Khand of the Vayu Purana is entirely dedicated to the story of the origin and significance of the River Narmada.

The River Naramada has numerous legends associated with it. Some of the most popular of these legends are as follows:

o   Once Lord Shiva was meditating under extremely harsh conditions and very sincerely. As a result Lord Shiva started perspiring and the consequent sweat was accumulated into a tank. It then began to flow as a river and was named Narmada.

o   On a particular occasion, two tear drops fell from the eyes of Lord Brahma upon the earth and thereafter formed two rivers namely the Sone and the Narmada.

o   The river was created as per the order of Lord Shiva, whose origin was in the Maikal region of Madhya Pradesh.

o   The river originated from the Jata of Lord Shiva. The river is therefore also known as the Jata Shankari. Even the pebbles of the river bed are regarded as Shiva Linga.

It means, “Every pebble stones of Narmada gets a personified form of Shiva”

Narmada is revered as one of the most sacred rivers amongst other rivers i.e. Yamuna, Godavari, Kaveri and Ganga. As per Hindu beliefs the River Narmada is believed to be the daughter of Lord Shiva and instead of a holy dip, even the sight of this river is believed to cleanse the soul of a devotee.

Throughout the course of the River Narmada, a number of temples dedicated to Lord Shiva are located. Some of the major Shiva temples situated here are as follows: 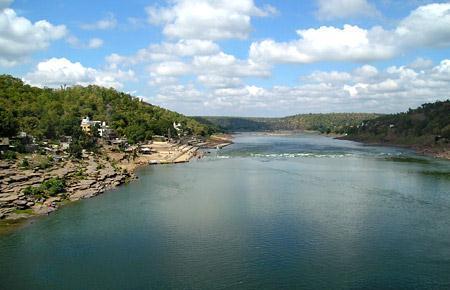