Nashik is a historical city in the north-west of Maharashtra, India. It is situated on the banks of Godavari River. The ancient city of Nashik is mentioned in all four Yugas. It is believed that in Sat Yuga the place was known as Padmanagar and in Dwapar Yuga as Janasthana. Finally, in Kali Yuga it began to be known as Nashik.

Today, Nashik is an important centre of pilgrimage in India with the Kumbh Mela taking place every twelve years. At the same time, the city is an established trade, commerce and agriculture hub in Maharashtra. Major government organizations located in the city are Hindustan Aeronautics Limited plant, Currency Note Press and Indian Security Press. Alongside there are innumerable private industries situated in and around the city such as Mahindra and Mahindra, CEAT, Cipla, Coca Cola, Siemens, Shalimar Paints and many more. A Glimpse of the City’s History

As per the mythological records, Lord Rama, his wife Sita and brother Lakshmana made Nashik their abode during their 14 years of exile. They stayed at Panchavati, in the forest of Dandakaranya in Padmanagar (Nashik). Lakshmana cut off the nose (‘Nasika’ in Sanskrita) of Ravana’s sister Shurpanakha here. Hence, to give relevance to this episode the place began to be known as Nasik or Nashik in Kali Yuga. During Sat Yuga, however, the place assumed multiple names including Padma-Aasana as Brahmadeva performed meditation; and Tri-Kantak as Lord Vishnu defeated three ferocious demons here. In the times of Kali Yuga the mighty territory of King Ashoka who reigned between 268–232 BCE, included Nashik. In the later period, fascinated by the beauty of Nashik, the Mughals renamed it as ‘Gulshanabad’ meaning ‘the city of gardens’. The city gained prominence during the times of Peshwas who renamed it as Nashik in the year 1818.

One of the 12 holy jyotirlingas of India is situated 36 kms from Nashik at Trimbakeshwar Temple. There is a famous legend attached to the Shiva temple at Trimbakeshwar. It says that once an argument took place between Vishnu and Brahma as to who was more supreme. Amid the controversy, Shiva appeared as an endless vertical column of fire stretching to the three worlds. Shiva thence asked them to find its root and tip. In the fight, Brahma tried playing tricks with Shiva upon which Lord Shiva cursed him and barred his worship in Hindu temples. On the other side, Lord Vishnu kept digging down the column of fire. Upon seeing Vishnu’s perseverance the pleased Shiva blessed Vishnu saying he would be worshiped till eternity. Thus, all 12 jyotirlingas appear as an infinite column of light and their lingam in the form of Stambha pillar represents the infinite nature of Lord Shiva. 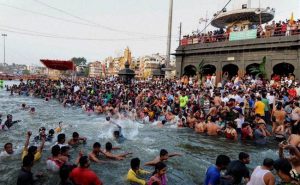 Another legend has it that Sage Guatama performed a tapasya (penance) to Shiva on Brahmagiri Hill surrounding the Trimbakeshwar Temple. Pleased with his devotion, Shiva brought down the sacred rivers of Ganga, Gautami and Godavari to earth from heaven. A bathing tank called Kushavarta Teertha is located near the temple and it is believed that the devotees who take the holy dip into the tank cleanse themselves of all sins before entering Lord Trimbak’s doorstep. Mondays are considered particularly holy for

visiting the temple. The festival of Shivratri is also celebrated here at a grand level attracting thousands of devotees annually.

A sacred tank named Ramkund (27m by 12m) was constructed in 1696 by Chitrarao Khatarkar. The tank is commemorated as a sacred pit where Lord Rama and Sita bathed during their stay at Nashik.

Around seven kilometers from Nashik is the famous Muktidham Temple built with the famous Makrana marble and engraved on the walls of the temple are the 18 chapters of the Bhagavad-Gita. Coming to this temple and seeking blessings of the god corresponds to visiting the four holy centers of the Hind i.e. Char Dham.

Next in the list is a mystical 70 feet temple of Lord Rama. It is named as Kalaram Temple built in the year 1794 by Gopikabai Peshwa. A gold-plated copper crest on the temple along with the black stoned body of the temple is a worth-watching heritage of Nashik. The temple is surrounded by smaller temples around it including Ganapati Temple, Vithal Temple, and Maruti Temple.

The Coin Museum is one of its kind in Asia and has invaluable records of Indian numismatics. Named as Indian Institute of Research in Numismatic Studies (IIRNS), the center preserves various authentic coins, documents, pictures and replicas of ancient coins. The archive is perused by various historians and scholars as a reference to Indian history. IIRNS, Nashik works a great deal in promotion of coin collection in India, to celebrate the glorious past of Indian history.

On a nearby plateau of Trivashmi Hill the Pandavleni Caves are located which were the holy abode of the Jain Tirthankaras like Vrishabdeo, Veer Manibhadraji, and Ambikadevi. These 2000 year old caves were built by Jain kings. Also placed in these caves are the beautiful sculptures of the Buddha and bodhisattvas.

Anjaneri Parvat (20 km from Nahik) is called the birth place of Lord Hanuman where Mata Anajani meditated to conceive Hanuman as her child in the form of boon from Lord Shiva. A temple dedicated to Mata Anajani and Anjaneri fort is also situated here.

Finally, the Naroshankar Temple of Rameshwar is also a must-visit pilgrimage centre of Nashik. Built in the year 1747, the temple is called one of the most extraordinary pieces of architecture of the 18th century. The temple acquired a unique style of architecture which is called ‘Maya’. Decorative lacework, platform based shrine, striking designs and vividly crafted outer sculpture are the major attraction of the tourists here.

Kumbh Mela in Nashik is held every twelve years. `Tourists and devotees from across the world assemble here to take a dip in the holy river Godavari. As per the Indian mythology, Nashik is one of the four places (along with Haridwar, Allahabad or Prayaga, and Ujjain) where the elixir of immortality, or ‘amrit’ (nectar), sprinkled during a severe fight amongst the gods and demons over acquiring the amrit pot.

Devotees accumulate in millions on the banks of River Godavari to take a plunge in the holy river and cleanse their soul. About millions of sadhus (saints) from across the country gather here during the Kumbh Mela and there are separate places for Shaiva and Vaishnava sects for taking the holy dip. There are thirteen active sects, amongst which ten belong to the Shaiva sect while three belong to the Vaishnava sect.