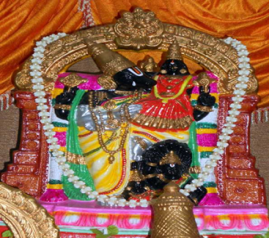 Nithyakalayana Perumal temple is a temple situated in Thiruvidanthai, in Kanchipuram District of Tamil Nadu, and it is dedicated to Lord Varaha, the famous boar avatar of Lord Vishnu. The temple is very good in art and architecture, and the significance of this temple was sung by the great Alwar saints. It is also one of the Divyadesam Temples, and here Lord Vishnu in the form of Lord Varaha is worshipped as Nithyakalayana Perumal and his beloved and beautiful consort Ma Lakshmi is worshipped as Komalavalli Thayar. It is believed that this temple was built by the Pallavas during the 7th century AD and later it was renovated by the Cholas during the 11th century AD.

As per legend, when once the powerful demon Hiranyaksha had thrown the mother earth under the ocean, the earth mother, Ma Bhudevi began to cry, and sought help from Lord Vishnu. In order to destroy the demon, and to rescue the earth mother from his clutches, Lord Vishnu took the form of Varaha, fought with Hiranyaksha, killed him, and took the earth mother from the ocean, by holding her on his two horns, and then Lord Varaha, affectionately placed the earth mother on his lap. As per the request of Rishi Kalava, Lord Varaha also married all of his 360 daughters, one per day and within a year he married all of his daughters. Since he married so many girls within a year, he is fondly called as Nithyakalyana Perumal.

This temple was visited by several ancient kings, saints and sages, and still now, lot of Vishnu devotees in and around Kanchipuram area, used to visit this temple, especially on the “VAIKUNTA EKADASI FESTIVAL DAY”.

We can also find some beautiful sculptures of Lord Varaha in the temple. There are shrines for Ranganatha and Ma Ranganayagi and the shrine of Andal is also found inside the temple. We can also find lot of Bachelors and Spinsters visiting this temple regularly, with a hope on their face, that they would be married soon with the grace of Lord Nithya Kalyana Perumal.