Varkaris are pilgrims belonging to the Vaishnava Sampradaya traditionally from the states of Maharashtra and Northern Karnataka. They worship Lord Krishna, in the form of Vithoba or Vitthal, the presiding deity of Pandharpur and the tradition was formed during the Bhakti movement when love for God was the Ultimate Truth. It was propagated by the Marathi saints, who emphasized on God realization through devotion and virtuous conduct to mould the attitude of the common people, including lower castes while sharing a common belief and practice. Varkari is derived from ‘Vari’ meaning moving or going on pilgrimage and ‘Kari’ meaning one who undertakes it. Popular saints in this tradition include Dhyaneshwar, Namdev, Eknath, Chokamela, Tukaram and various other sants. 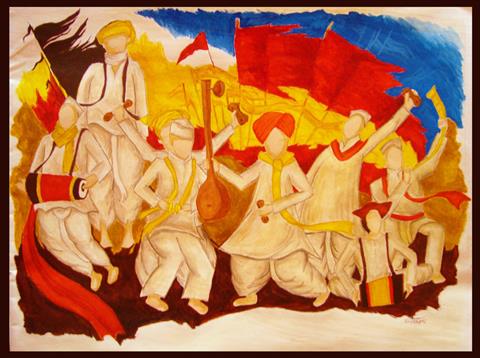 The Varkaris undertake an annual pilgrimage (vari) on the 11th Ekadashi day of the holy month of Ashadha (June – July) during which the pilgrims carry the palanquins or Palkhis of the saints from their places of Samadhi to Pandharpur walking hundreds of miles and singing abhangas or devotional songs composed by the saints. Legends state that it was started by the son of Tukaram in the 16th century. The Varkaris wear tulsi malas or rosary beads, tulsi being dear to Lord Krishna, observe ekadashi fasts, prayers, read holy texts, adhere to truth, practice detachment and consume only Sathvic food and refrain from non-vegetarian diet and alcohol.