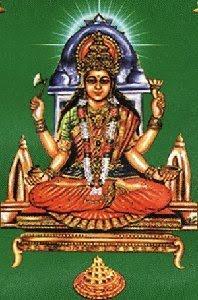 The Devi’s temple is located within the temple complex of Kukkuteswara Swamy. Puruhutika Devi is situated on the outskirts of the village Pithapuram in East Godavari district, Andhra Pradesh.  Pithapuram is 12 kms from Samalkota and 20 kms from Kakinada and 62 kms from Rajahmundry. Nearest railway station and airport is from Rajahmundry and Vishakhapatnam. State government operates regular bus services to the temple.

a)   Ganapathi Sachidananda Ashram located near the temple.

b)   Kunti Madhava temple, one of the five Madhava temples created by Lord Indra to get rid of the sin of killing the demon, Vriddhasura.

The temple and its history

Kukkuteswara Swamy temple is a huge ancient temple. Puruhutika temple is situated on the north eastern corner of the main temple facing south. There is a pond known as “Padagaya Sarovaram”* at the entrance of the temple.  This is a holy pond and many devotees take a dip in the pond.

*Padagaya refers to the place where a body part of the demon Gayasura fell. Trimoorthys (Lord Brahma, Vishnu and Maheshwara) killed the demon Gayasura and his head, trunk and legs fell at three different places. Head also known as Siro Gaya fell in Bihar, Trunk or Nabhi Gaya in Orissa and legs or Pada in Pithapuram. His legs which fell at Pithapuram turned into a water tank. Thus the place gets its name as “Padagaya Kshetram”. Shraddha karma of the ancestors or departed souls is performed at this place.

Kukkuteswara Swamy temple is situated on the right side of the pond. Puruhutika temple is a small shrine with beautiful carvings of goddess. Other deities in the temple complex include:

b)   Rajarajeswari: She is the Deveri (wife) of Kukkuteswara Swamy.

c)   Sripada Srivallabha Dattatreya: This temple dedicated to Lord Dattatreya is situated in the South-West corner of the main temple

g)   There is a Banyan tree beside the shrine.

h)   There are also foot prints of Sripada Vallabha Swamy which are the real padukas of the Swamy located beside the shrine.

There are other shrines dedicated to gods and goddesses such as Annapurneshwari, Ayappaswamy, Sri Rama and Sri Visveshwara.

Pithapuram is considered as the Dwadasha Punya Kshetra (one of the twelve important pilgrimage centres.) Temple timings are from 5.30 am to 9.00 pm. In the afternoon, the temple is closed from 1.00 pm to 4.30 pm.

Puruhutika Devi is in a standing position. The idol is made of granite and is adorned with jewels, a Kirit and robed in silks. The deity has four hands. Starting from the lower right to the lower left, Devi’s lower right hand has a bag full of seeds, axe (Parashu), lotus and Madhu Patra. There are two sects of worshippers of Devi. The first sect worshipped the Devi as Puruhootha Lakshmi. She is meditating with a lotus and Madhu Patra in her hands. This sect followed the Samayachar* form of worship. The second sect worshipped the Devi as Puruhoothamba. She is meditating with an axe (Parashu) and bag of seeds in her hands. This sect followed the Vamachara* form of worship. The original deity was buried under the temple.

Kukkuteswara Swamy is a Swayambu (self manifested) Spatika Linga in the sanctum Sanctorum. The Lord is in a cock form at the temple. There is wing like structure besides the idol of Kukkuteswara Swamy. There is also a huge Eka Shila Nandi in front of the idol of Lord Shiva. The Nandi is the second biggest after Lepakshi Basaveshwara.

*Samayachar refers to a form of worship where homas/ havan are conducted to appease the god. It refers to an internal mode of worship.

*Vamachara refers to a mode of worship which is not in accordance with the Orthodox tradition of worship.

According to one puranic reference, Lord Indra offered prayers to Puruhutika Devi and was blessed.

Jagadguru Sripada Vallabha was born in Pithapuram. He also prayed to Puruhutika Devi and realised the self. He is believed to be an incarnation of Lord Dattatreya.