Ramanathaswamy Temple of Rameshwaram is one of the most venerated and ancient Shiva temples of India and is the second of the Char Dhams or holy places that every Hindu must visit during his lifetime. The name Rameshwaram takes us back to the priceless pages of the great epic Ramayana as the city and the temple both are as old as the epic. The temple is closely associated with Rama’s victorious return from Sri Lanka after defeating Ravana. Both the Shaivites and Vaishnavites visit this pilgrimage centre which is famously called ‘the Varanasi of South’. It is even said that a pilgrimage to Benaras (Varanasi) is incomplete without a visit to Rameshwaram. The island on the eastern shore where the temple of Sri Ramanathaswamy is located is conch-shaped and is indicative of Lord Vishnu’s conch which he holds in one of his hands.

The island of Rameshwaram is located in the Gulf of Mannar at the southern edge of Indian peninsula. Rameshwaram, as its name indicates, is the holy place of Iswara (Lord Shiva) worshipped by Rama. It is situated in the state of Tamilnadu where an island is separated from the mainland by the Pamban channel. Rameshwaram is famous as a penance or parihara place where a dip in the holy theerthas can get us devoid of all our sins and can give us Mukthi (salvation). The temple is fascinating not only as a holy place but as a historical place with thousands of stone carvings which are of high value for their literary and sculptural perfection. 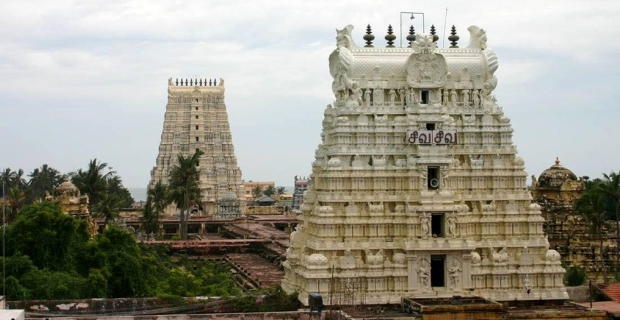 The main deity worshipped here is Lord Shiva, known as Ramanathaswamy, Rameshwar or Ramalingeshwar meaning Shiva – The Lord of Rama. The Lingam here is moulded by Devi Sita and is installed by Rama; it is enshrined in the main sanctum of the temple. The Lingam of Vishwanatha which was brought by Hanuman is preserved in another chamber to the north. Worship is offered to Vishwanatha first.

Meaning – Whoever pays a visit to Rameshwara get bestowed with my blessing and they can always reside in Sivalokha.

Parvathavardhani (Parvathy), is enshrined in a sanctum to the right of the Lord’s shrine. There is sanctum sanctorum of Lord Vishnu in his ‘Sethumadhava’ avatar right behind the shrine of Sri Ramanathaswamy and between the 2nd and 3rd prakaras. The name ‘Sethumadhava’ or strictly speaking ‘Svetha Madhava’ is derived from the fact that the idol is of made up of white marble.

Hindu legends identify the bridge at Rameshwaram with the bridge built by the monkey army of Lord Rama. As mentioned in the Hindu epic Ramayana, this army helped Rama to release his wife Sita from Ravana’s captivity. Ramayana (verse 2-22-76) attributes the construction of this bridge to Lord Rama. The bridge is named as Setubandhanam in the epic, the name which persists even till today.

So far the bridge had served as a link between the legend and the reality and as a connection link between India and Sri Lanka. In its various legendary episodes, Ramayana also mentions Adam’s bridge and its neighboring areas including Dhanushkodi, Thirupullani, Devipattinam and Rameshwaram. 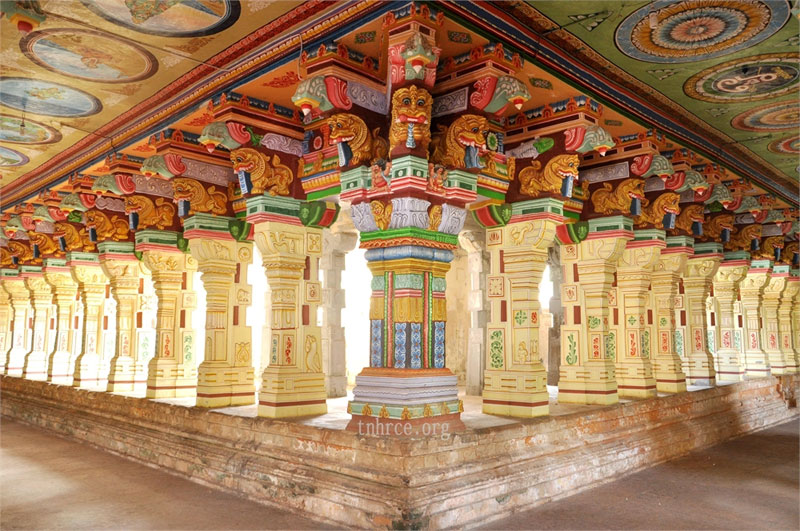 Though the existence of the temple takes us back to Rama’s time, the present temple and the shrines have traveled through centuries of evolution. At first, the temple was just a thatched hut maintained by a hermit.

It was under Sethupathy Rajas the temple flourished a lot. They were known as guardians of the Sethu (bridge) and Ramanthapuram was their head quarters. Detailed information about the Sethupathy Rajas is available in the Ramnad Manual maintained by Tamil Nadu archives.

We have a very well known story behind the origin of the Jyothirlinga in the temple of Rameshwaram. It is from the pages of Ramayana. After defeating Ravana in the war and escorting Sita, Lord Rama was going back to his Kingdom of Ayodhya with Lakshmana and Hanuman. But all the time he was tortured by a feeling of guilt caused by the sin of Brahmanahathya (killing of Brahmin) as Ravana was a Brahmin being the great grandson of Brahma himself.

As per the advice of Rishis and his Gurus, Rama decided to do penance and also wanted to show his gratitude to Lord Shiva for making him triumphant in the war. He asked Hanuman to get a holy Lingam of Lord Vishwanatha from Banaras. But as he was late to bring it before the fixed auspicious time, Rama installed the Lingam of earth moulded by Devi Sita. Hanuman was very disappointed that he could not come in time to satisfy his Lord’s wish. Later, an irked Hanuman made an effort to pick up the sand Lingam with his tail, the imprint of which still remains on the Lingam. However, the Lingam of Sita was so inviolable that the sheer force of the pull threw Hanuman a few kilometers away turning the soil where he fell quite reddish. This is the main reason behind the mystery of the red soil which is found to have spread a few kilometers across the island.

Rama also wanted to honour the devotion of Hanuman in some way. Hence Rama installed the Lingam brought by Hanuman before the one made by Sita, so that everyone will have the darshan of his Lingam first. The Lingam made by Sita is known as Ramalinga and the one brought by Hanuman as Vishwanatha, or Hanuman Lingam or Kaasilingam. Even now Vishwanatha is always offered pujas first and then only Ramalinga. In fact the entire region of Rameshwaram is linked to various incidents from the epic Ramayana.

This temple and the stories linked to it prevail as a solid and permanent relic to the prolific and precious cultural and historical background of our country. With many inimical elements peeping and popping to tarnish the total grandeur of the temple and the neighboring places and monuments, still it stand aloof as a timeless hallmark of our rich heritage. The Hindu temples are the epitomes of various social, cultural and economic centers influencing the lives of both urban and rural population.

Rameshwaram is prominently a religious city with a high voltage of cultural value. The total city and its lifestyle reflect the importance of religious rituals and the vital part it plays in everyone’s life. Everything in the city of Rameshwaram and the temple revolves with Ramayana as the axis. The epic story of Rama and Sita has great impact on every Indian irrespective of religion, caste or creed. It can be called as a national heritage. They belonged to an age when Christianity or Islam had not even originated.

The abolition of caste system is always described as an achievement of modern times, but Ramarajya (realm of Rama) was without caste systems. The holy saint Valmiki who wrote Ramayana was a Shudra (Low caste) by birth. And when Sita went to forest to meet the requirement of the people to prove her sanctity, she lived in the ashram of Valmiki and gave birth to Lava and Kusha there. She was like his adopted daughter and the kids were his disciples. Valmiki as an astrologer stuns even our modern computer software with his accuracy in the study of planetary configurations. Many of the important characters of Ramayana like Sabari and the vanaras of Rama’s army belonged to tribes of central and southern India. With historical and cultural abundance Rameshwaram always remains a special place for sightseeing, for its artistic excellence and wonderful monuments.

The temple of Ramanathaswamy is an embodiment of Dravidian architecture. The temple is spread over an area of 15 acres, has massive walls, lofty gopurams, and a huge Nandi. The image of Nandi is about 6 meters tall and 7 meters in length. It has four massive doorways with towering gopurams to the north, south, east, and west. To view the Lingam or the presiding deity of Sri Ramanathaswamy, one has to enter through the massive east gopuram or the eastern entrance. A nine-storey (38.4 m high) gopura stands erected at the main eastern entrance of the temple.

The Rameshwaram temple has a 4000 feet extended pillared-corridor with more than 4000 pillars, supposedly the longest in the world. It has an unbelievable thousand pillars, ornate and carved in exquisite detail. This astounding architectural marvel is flanked on either side with carved pillars above raised platforms. The most unique feature about the rock is that they are definitely not indigenous and were imported from some other nation to Tamil Nadu.

Another significant feature of Ramanathaswamy Temple is its 22 wells extended throughout the temple premises, it is said that the taste of water varies from well to well and each well contains water with curative features. Bathing in its waters is considered extremely holy and is called the ‘koti theertam’, the ritual which is preceded by bathing in the sea called ‘agnitheertam’. It is said that any person who takes this holy bath gets rid of his sins.

The shrine devoted to Lord Shiva’s consort Parvarthavardhini is on the right side. The entry to the Ramlingam is guarded by Hanuman who is smeared in orange vermilion. There are multifarious shrines of other gods like Ganesha, the Hanuman Lingam and various deities across the temple premises. On the eastern most part of the island is a place called Dhanushkoti which had great significance before a holocaust of powerful cyclones ravaged it. The Kodandarama Temple is located between the Dhanushkoti and Ramanathaswamy Temple. There is a small temple called Vibhishan temple where Rama crowned Vibhishan as the king of Sri Lanka. The whole island is dotted with several small off shoots of the main temple. In every street, one can see tiny temples dedicated to Lord Ganesha, Hanuman and many forms of goddesses.

Gandamadana Parvatham: Located around 2 km away from Rameshwaram, Lord Rama’s feet imprint placed on a wheel (Chakra) is found in this shrine.

Rameshwaram welcomes huge devotees from every corner of the country throughout the year, especially during festival times. This is because a visit to Rameshwaram during festivals offers tourists to experience the cultural glory of this land of Ramayana. All auspicious days of Hindu calendar is celebrated here.

Masi Sivarathri; is celebrated during Feb/March and it is dedicated to Lord Shiva. Rathotsavam also takes place during this celebration. On this day Lord Shiva is offered Sahasrakalasabishekam, Shivratri Nrutyam, Rudrabhishekam and many other Poojas.

Mahalaya Amavasya: the last day of Mahalaya Paksham during the month of September or October. It is the no moon day of the month of ‘Pitrupaksha’ when Tharpan is ritually offered to the deceased ancestors so that their soul rests in peace. July-August is the time for Tiru Kalyana, celebrated with religious rituals and gaiety. Thai Amavasai and Thirukalyanam, are also important Rameshwaram festivals which highlight the tradition and cultural glory of this beautiful temple.

Deepawali and Karthikai also are days of great jubilation, with the temple fully lighted it looks like heaven-on-earth. The whole place reverberates with divine chanting and the colourful decorations.

Note – To bathe in the temple tanks the devotees are charged with a nominal fee per head. There are separate charges for Special darshan in the temple.