In: Jain Pilgrimage, Travel
With: 0 Comments

Ranakpur is a village located between Jodhpur and Udaipur in the Pali district of Rajasthan. It is famous for its Jain temple dedicated to Lord Adinatha or Rishabhdev the first Tirthankar. The Ranakpur temples are one of the holiest places of pilgrimage for the Jains and are situated amidst beautiful streams, lush green valleys and scenic views. 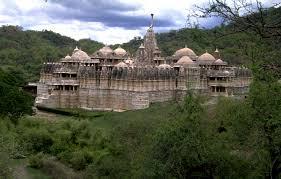 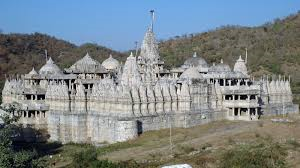 The Ranakpur temple was built in AD 1439 during the reign of the Rajput King Rana Kumbha and hence was named after him. Dhanna Shah was the founder of the Ranakpur temple and according to legend he purchased the land from Rana Kumbha when he had a vision about the design of the temple and invited architects from all over India to participate in the selection. Finally he recruited the sculptor Depa whose design suited Dhanna Shah’s vision. The construction of the temple took 65 years. 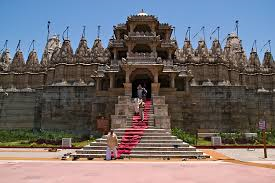 This beautiful temple complex in the Aravalli ranges covers an area of 4500 sq yards and has 29 halls. Its basement is of 48000 sq feet that covers the whole complex. There are over four hundred columns that support four subsidiary shrines, twenty four pillared halls and domes. In the main prayer hall are two big bells of 108 kgs whose sound echoes in the entire complex. The main temple is a Chaumukh or four faced temple dedicated to Adinatha. It is in the form of a heavenly aircraft as envisioned by Dhanna Shah. The 29 halls, 80 domes and pavilions with 1444 pillars are artistically and intricately carved with figurines of dancing Goddesses. The plan has four separate entrances one on each side which lead through a series of columned halls to a central arena and the sanctum which has a four faced white marble image of Lord Adinatha. This temple is surrounded by several other smaller shrines and domes. These are in turn surrounded by a range of cells or Bhamati for images each having a roof of its own. The foundation of the temple was made in such a way that the temple base could accommodate three storeys with their several pavilions. Beautiful turrets rise from this wall and five spires or shikhars rise above the walls and each spire has a shrine below, the most prominent and largest one surmounting the central altar.

The three other temples in the same complex are the temples of the Tirthankars Parshvanath, Neminath and the Sun God. The Parshvanath temple was built in the 15th century and has beautiful engraved windows embellished with Jain figures. The Sun God temple has a circular structure with numerous wall projections and the image of the Sun God driving his chariot of seven horses is aesthetically pleasing. The temple of Amba Mata is a short distance away from the temple complex.

The Indian Government issued two beautiful stamps on the temples of Ranakpur and Dilwara on 14th Oct 2009 showing its architectural grandeur.

One can reach the shrine easily as it is connected with almost all parts of Rajasthan. It is at a distance of 95 kms from the main city of Udaipur.

By Air:
The pilgrimage is near Udaipur so you can reach Udaipur airport and from there you can hire a taxi or can go by bus to Ranakpur. Udaipur is connected to all the major cities of India.

By Road:
Ranakpur is also well-connected to many big cities via roads and a dense network of regular buses. Both private and buses can be availed from places like Chittorgarh, Ahmedabad, Vadodara, Mumbai and Indore to reach the shrine.
Accommodation

·         You can get a room in the temple premises for INR200 a night. The rooms, which were constructed for temple devotees, are spartan but have attached toilet/bathrooms. Hot water for bathing is available in the morning. A breakfast thali is available for INR15. The temple has a right to refuse you a room, so it’s best to present yourself in a humble manner and be willing to learn more about Jainism. Hindus should have no problem getting a room.

·         Shivika Lake Hotel, Near Jain Temple (Near Ranakpur temple, below the Aravali mountain range, on the shore of Lake Nalwania),

0091-9829191099. checkin: 12:00 noon; checkout: 12:00 noon. Shivika Lake Hotel is set in an idyllic setting with hills all around. Shivika Lake Hotel has in total 13 rooms and 5 tented accommodations. All rooms are tastefully and traditionally furnished with local material, colour & design. The rooms give a camp atmosphere with modern amenities. You can also trek or have a safari from there.

02934 286 186 Fateh Bagh is a recreation of 200 years old beautiful ruined palace of Rawla Koshilav Palace with period furniture and ethnic décor with each guest room seems to have staged a story indigenously recreated into marvellous luxury hotel.

The Ranakpur temples are architectural marvels and there is a wonderful play of light and shade on the pillars as they change from gold to pale blue as the sun rays fall on them through the day. The breathtaking grandeur and workmanship so impressed Emperor Akbar on his visit to the temple that he engraved his message on one of the pillars which says that no one will be allowed to destroy this architectural masterpiece. The devotion and faith of the devotees help in sanctifying this holy land which helps them in their spiritual quest for enlightenment and happiness.