The temple is located in Trimkomali, or Trincomalee on the eastern coast of Sri Lanka. The place Trinconmalee means a triangular shaped hill (Tri- cona- malee or malai). The temple is well connected by roads. There is also a Kali temple which people visit enroute to Shankari Devi temple.

a)   Ramboda is a temple dedicated to Lord Hanuman

About the Temple & its History 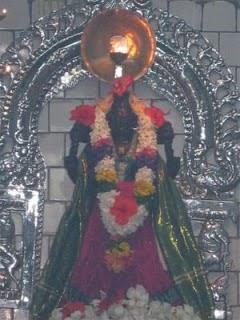 Trikoneshwara is one of the four important Shiva temples in Sri Lanka. The other three are in Keetheswaram, Muneeswaram and Galle.

The deity was worshipped more than 2500 years ago, even before Prince Vijay one of the first Kings who is said to have landed in Sri Lanka during 300 BC. The Trikoneshwara temple at its height of glory was one of the richest temples in the South. The ancient Shiva temple was a large structure on the rock. According to Archaeological and literary evidence, there were at least three temples on the hill top. The Gopurams of the temples were taller than one another and the tallest gopuram overseeing the Indian Ocean, had the main deity. The main temple itself was a huge structure with nearly 1000 pillars supporting the huge hall and many small mandaps.

Pallava, Chola and Pandya rulers have made significant contributions for the upkeep of the Shankari and Trikoneshwara temples. The Portuguese invaded Sri Lanka in 15th Century. The Portuguese Catholic Colonists destroyed several places of worship including that of (Muslims and Buddhists) in and around the island of Sri Lanka after 1505 AD. On the Tamil New Year day- 14th April 1624, the idols were taken on a procession to the town, during which, the Portuguese entered the Trikoneshwara temple in the guise of priests and plundered the temple of its valuables. The Portuguese cannon balled the top of the temple from their ship. In place of the temple is a lone pillar. The temple was destroyed and its materials were used in the construction of the Fort Frederick nearby. The deities of Shankari Devi and Trikoneshwara were hidden in a silted well to save them from the onslaught of Portuguese invasion. The idols were recovered from a well in Trinco after independence of Sri Lanka in 1948. 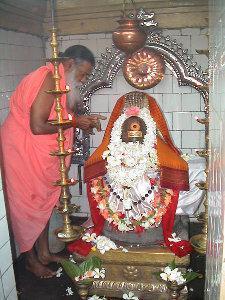 Some of the artefacts of the destroyed temple are kept in the Lisbon Museum. There is also a stone inscription by Kulakottan with a dual fish emblem, with a prophecy that the land, after 1500 AD will be ruled by people with a different eye colour for 500 years and then the earlier rulers will get to rule the land- Vadugus.  Tricomalee was subsequently ruled by the Dutch for 500 years and then by Vadugus and by the French, till the British captured Sri Lanka in 1795. In 1689, a small temple was built nearby to keep the idols which were preserved. No worship was allowed for the deities. Later, a temple in 1952 was built for Trikoneshwara.

The present Trikoneshwara temple is located adjacent to small Shankari Devi temple built in 1952 by some local Tamil Hindu people, after a gap of 450 years.  There is also the sacred Bilva tree at the edge of the cliff perched on top of the Indian Ocean. The view from the hill top is exhilarating and splendid. Trikoneshwara temple is built by Sage Agasthya from the instructions of Lord Shiva, who was impressed by Ravana’s devotion. This temple is unique, as the temple is built by the Lord for his bhaktha. (devotee). Other deities surrounding the main deity- Trikoneshwara include, Lord Ganesha, Lord Subramanya and other deities. Goddess Shankari is worshipped in the form of Mathumai Ambal.

According to one Puranic reference, Parvati Devi requested Lord Shiva to build a palace for her. But Shiva, used to living in Mount Kailash did not heed to her request.  After several requests from Parvati, Lord Shiva finally relented and asked Vishwakarma to build a palace. Vishwakarma built a beautiful palace in Lanka Dweep for Parvati Devi. Lord Shiva and Parvati came to Lanka to perform the Griha Pravesh of their palace. Ravana was doing a rigorous penance to get the blessings of Lord Shiva. Lord Shiva and Parvati Devi were pleased with the penance of Ravana and Lord Shiva blessed Ravana with boons. Ravana, a Brahmin by birth and master of all the four Vedas was a great devotee of Lord Shiva. Pleased by his penance, Parvati Devi asked Ravana to perform the rituals associated with the Griha Pravesh of their palace. Parvati Devi was impressed with Ravana who did the Griha Pravesh rituals and wanted to bless him with a boon. She asked Ravana to ask for a boon, and he asked for the Lanka palace. Parvati Devi, though saddened initially by the wish of Ravana granted the boon and gave away the palace as Dakshina. However, Ravana requested Parvati Devi to stay at the palace. Parvati Devi agreed to stay at the palace as Shankari Devi with the condition that she would stay at the palace, as long as Ravana pays heed to her words.  After some time, when Ravana brought Sita Devi from Ayodhya, Parvati asked Ravana to return her to Lord Rama. When Ravana refused to return Sita Devi, Shankari Devi left the Lanka Palace for Kailash.

Another reference is that Lord Rama also visited Trikoneshwara temple to get rid of the Brahma hatya Dosham. 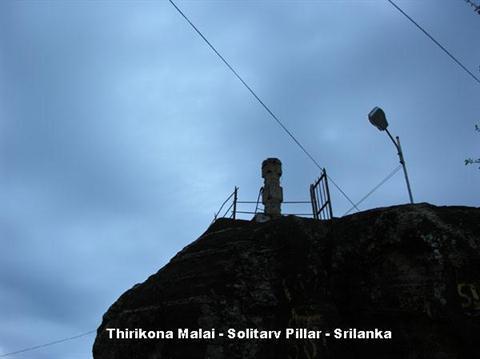 Another reference is when Vayu, the Wind God and Adishesha, the serpent on which Lord Vishnu rests, had a bitter fight about their individual strengths. Vayu sneered at Adishesha’s strength as he could be easily caught by Garuda, the bird. Adishesha then coiled himself around Mount Kailash and challenged Vayu to attack Mount Kailash. Vayu turned into a hurricane and attacked Mount Kailash. All the gods and goddesses prayed to Lord Shiva to save them. Lord Shiva asked Brahma to create another Kailash in the South and came to reside at Lanka, also known as Dakshina Kashi. Adishesha lifted his three hoods out of 1000 hoods to listen to Lord Shiva, during which time, Vayu blew over three peaks of Mount Kailash. These three pieces fell in Thondai Naadu (Thiru kalahasti), Chozha Naadu, (Thiruchirupalli) and in Eezha Naadu, Trinkomalee, also Thirukonnamalai in Sri Lanka. The third hill is known as Thirukkonamalai and it lies along the same longitude as Kailash.

Another Puranic reference is that the asura, Kethu swallowed nectar during the Samudra Manthan or churning of the ocean in a fight between the asuras and devas. He attained immortality as he swallowed the nectar. Lord Vishnu who came to know about this beheaded Kethu and he was wandering headless, till such time Lord Brahma took pity on him and made Kethu a Lunar Node along with “Rahu”. Kethu came to Ketheeswaram, prayed to Lord Shiva and obtained Moksha.  Thus the place is known as Tiru Kethu esswaram.