Sri Sharada Shakthi Peeth is the place where Devi Sati’s right hand had fallen. Here Devi is worshipped as Sharada.

The Temple & its History 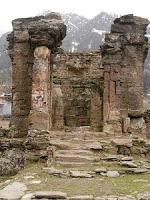 Sharada Shakthi Peeth is an ancient temple. The ancient temple had four doors in each direction. The main entrance to the temple was from the west. There were footsteps at the main entrance. The construction inside the temple was just plain. The sanctum which was rectangular in shape had 63 steps. Regular Puja was offered to the Devi daily. The temple architecture had features, such as an expansive courtyard, pillars and columns which characterise the typical Kashmiri style of architecture.

Kashmir was considered as a land of scholars and intellectuals in all branches of knowledge. Kashmir Sharada Peeth was considered as the centre of Vedic learning until Muslim rulers invaded the State. Several Hindu Students would go to Kashmir to pursue higher studies. (Advanced learning). The temple had a huge library attached to it. The library which was used by scholars from neighbouring countries too had works on art, science, literature, architecture, music, humanities, medicine, astrology, astronomy, philosophy, law, Sanskrit etc. Prior to partition of India, several Kashmiri pundits stayed there.

The first attack on the temple was in 14th Century. In 19th Century Dogra King of Kashmir renovated the temple. He appointed a priest and ensured that regular rituals would be conducted in the temple under the orders of Maharajah Gulab Singh. Noted historians and chroniclers including Al Beruni in 1130 AD and M.A Stain in 1892 have visited the temple. They have described the temple as one of the important Hindu temples on par with Somnath temple, Thaneswar Temple and Surya temple of Multan.  In 1948, Pakistani Tribal raiders raided the village and the village was occupied by Pakistanis.

Kashmiri language has the script of Sharada which is similar to Devnagari.

Al Beruni has mentioned that there was a wooden image of the deity on a stone plinth (pedestal) in the Garba Griha. There was a Shiva Linga outside the temple. Devotees would pray at both the temples. For centuries, thousands of devotees used to visit the temple not only from India but also from neighbouring countries and received the blessings of the Devi.

The deity was also known as Kashmira Puravasini, meaning the goddess who lived in Kashmir. Kashmir was also known as Sharada Peetha, due to the presence of Sharada Devi temple. Abul Fazl in Ain-i-Akbari, during 16th century has said that on every eighth day of the month at the time of full moon (Shukla Paksha Ashtami) miracles can be experienced. The temple is said to be full of gold particles.

According to Jonaraja’s* chronicle, it is mentioned that Sultan Zain-ul-abidin visited the shrine in 1422 AD to witness the miraculous manifestations of the goddess. It is said that there were appearance of sweat on the face of the image of the goddess, the arm shaking, and a sensation of heat on touching the feet.

*Jonaraja was a Kashmiri historian and Sanskrit poet during 15th Century AD.

It used to be a widely held belief that every scribe (writer of books or documents) would offer his writings to Goddess Sharada Devi seeking her blessings. The Kashmiri scribes would keep their Bhurjapatra manuscripts (a kind of writing material made from “Birch” tree) covered in a platter in front of the goddess overnight. If the pages remained undisturbed, it meant that goddess had given her blessings. If the pages were sifted, or ruffled, then it was considered that Devi had not approved of the works.

According to one reference, Pundits refused to perform the thread ceremony of Shandilya, the son of Vashishta, an ascetic Rishi. Then Vashishta instructed his son to visit Kashmir and offer his services to goddess Sharada Devi. He came to Kashmir and meditated in Sharada Vanam for long. He bathed in the holy AmarKund Lake next to Sharada temple. Then his body turned into radiant gold by the grace of goddess. He later came to be known as the famous Shandilya Rishi.

The temple had entrances in all four directions. Eminent scholars and philosophers had entered the temple from other three directions except from the South. Adi Guru Sri Shankaracharya visited the temple in 8th Century AD from the South. He defeated all the scholars in a philosophical debate and ascended the “Sarvajna Peeta” (the seat of all knowing). Sri Sharada Devi, the presiding deity herself set a test for Sri Shankaracharya. Sri Shankara passed the test and received the blessings from Devi.

Kashmir was earlier known as Kashyamir. Kashmir is said to have got its name from Sage Kashyapa who lived here.

People would offer cow’s milk, agricultural produce and cereals to the goddess.

A fair used to be held in the month of Badrapada masa (Aug- Sep) on the eighth day of Shukla Paksha Ashtami when thousands of devotees would throng the temple to have a darshan of the goddess.