Gurudwara Shri Keshgarh Sahib is located in the town of Anandapur Sahib (district Ropar) in the state of Punjab. Hence it is commonly known as Gurudwara Anandpur Sahib. It is situated on the banks of the river Sutlej amid the Shivalik hills. It is one of the most sacred places of the Sikhs and is closely linked to their history and religious traditions. The Khalsa Panth, the council of five wise men who govern Sikh religious affairs and the practice of worshipping the Guru Granth Sahib was first established here. The name means ‘City of divine bliss’ and truly one immediately feels the sense of serenity pervading the place. It is an ideal place to gain an insight into the essence of Sikhism and thousands of devotees gather at Anandpur Sahib to celebrate festivals like Holla Mohalla and Baisakhi uplifting the whole area with their culture, tradition and religious fervour. This place is considered very sacred as both the Gurus, Guru Tegh Bahadur and Guru Gobind Singh stayed here.

A Takht is a throne or seat of authority. There are Panj Takhts or five takhts or five gurudwaras which have a very special significance in Sikhism. The Takhts are said to be a centre of enlightenment and a fountainhead of inspiration for the entire Khalsa Panth. They are-

1. Akal Takht(Throne of the Timeless God) is situated opposite the Golden Temple(Harmandir Sahib).

2. Takht Shri Damdama Sahib is situated near Bhatinda in Punjab.

Anandpur Sahib was founded by Guru Tegh Bahadur the ninth Sikh Guru. Before 1665 the entire area was said to be covered by forests and bushes with a number of wild animals but Guru Tegh Bahadur turned this forest into a fine town of Chakk Nanki which he named after his mother Nanki at the top of the hillock known as the ruins of Makhowal. The area became a great centre of spiritualism, arts and learning. The area later became prosperous at the time of Guru Gobind Singh who spent 25 years of his life here.

1. Keshgarh at the centre of the town but now a Takht.

2. Anandgarh or the fort of bliss.

3. Lohgarh or the Fort of Steel

4. Holgarh or the fort of colour.

5. Fatehgarh or the fort of victory.

All the forts were joined together with underground tunnels and earthworks. The construction began in 1689 and is said to have taken over ten years to complete.

The Keshgarh Sahib Gurudwara is the town’s biggest landmark and is located on a small hill. The fort which was built around it no longer exists. The Gurudwara is an impressive white structure which is illuminated at midnight. In the main hall of the Gurudwara is the Sikh Holy Book, the Guru Granth sahib under a canopy above which rises a fluted lotus dome topped by a tall ornamental pinnacle of gilded metal. In the middle of the hall behind it there is a small rectangular glass structure which has 12 relics in it. These 12 relics are associated with Guru Gobind Singh and the Sikh martyrs. Five of these relics were brought back from England which had been taken when the British captured Punjab and six were brought from Nanded the place where Guru Gobind Singh passed away. They include the Khanda(double edged sword), the Kataar(personal dagger of Guru Gobind Singh), Saif(a double edged weapon), gun, some spears, shield etc. There is a balcony overlooking a spacious courtyard at a lower level. For large congregations there is a large spacious pavilion. The roof, corners of the hall and the balcony are adorned with domed kiosks. There is a huge langar hall(community kitchen) attached to this Gurudwara which can seat about 40000 people.

There are sacred places near Anandpur Sahib like the place where the wedding of Guru Gobind Singh was celebrated, the place where his wife was cremated, where his sons were born, where he used to meditate etc. Anandpur Sahib is a city of Gurudwaras and forts as there are 33 big and small Gurudwaras closely connected to the city and the Sikh Gurus.

Devotees from all over the country gather during the festival of Holla Mohalla(Holi) in March. The tradition dates back to the 10th Guru who decreed that the festival would be treated as an occasion to display the martial art spirit of the people. The fair lasts for three days and the Gurudwaras are specially decorated and community functions are organised everywhere. On the last day of the fair Nihangs(armed Sikh order also referred to as Akalis) wearing traditional dress go on a long procession throughout the city and this culminates in a demonstration of martial arts games like tent pegging, riding, sword wielding etc which are witnessed by a large number of people.

Baisakhi is celebrated every year to mark the birth of the Khalsa. On this day Guru Gobind Singh baptised the ‘Panj Pyaras’ at the place where the Takht Shri Keshgarh Sahib stands.

Rail : The nearest Railway Station to reach Anandpur is at Nangal. The main railhead for trains coming in from Mumbai is Ambala Cantonment, 125 km away. From Ambala Cantonment there are a few passenger trains running to Nangal and an Express train as well, all of which stop in Anandpur Sahib.

Road : There are ample buses plying at regular intervals from Delhi and Chandigarh to Anandpur Sahib.

There are dharamshalas in three buildings near the Gurudwara which has about 400 rooms to house pilgrims without any cost.

The proximity of the Gurudwara with the Himalayas on one side and the the river Sutlej on the other side makes the whole area look picturesque and beautiful. The peace and solitude of the place and the holy vibrations emanating there makes it a sacred place for pilgrims to meditate and progress on their inner spiritual quest for faith, devotion and self realisation. 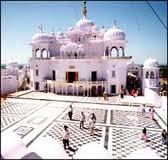 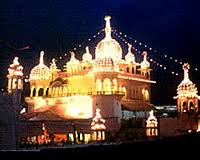