Name of the temple:   Shrinathji Temple

The Shrinathji Temple is located in the small temple town of Nathdwara. Nathdwara is situated on the banks of River Banas in Rajasthan. The Shrinathji Temple hosts the image of Shrinathji, i.e. Lord Krishna. The image is enshrined as Mount Govardhana in the Vraja Bhoomi, Mathura. Vallabhacharya, the renowned Vaishnavite saint, used to preach the rules of worship in this temple itself. The temple of Shrinathji is also very popular as one of the five most important shrines of Vaishnava tradition, since Shrinathji is the principal god of the Vaishnava sect.

Shrinathji Temple being one of the richest temples in India is also known as the ‘Haveli’. The Maharana of the Udaipur royalty prays in this temple and is also called ‘Shriji’ by the people. The overwhelming bounty of the temple is testified by the fact that it has four wells where ‘desi ghee’ (butter) is offered and even the food grinders are made of silver and gold. The temple authorities also possess almost 500 cows whose milk is used to prepare sweets and milk products.

The temple has its own tailoring section where tailors prepare magnificently embellished dresses for Shrinathji. Besides, millions of rupees are also offered as donations on various special occasions. 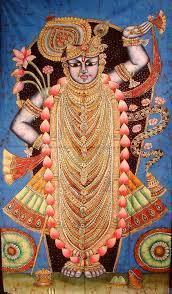 The image of Shrinathji, enshrined in the temple, essentially depicts Lord Krishna lifting the Govardhana Hill with his hands and trying to protect the cowherds under the hill from the raging rainfall sent by Lord Indra. The idol depicts Shrinathji with his left hand raised up and right hand tightly fisted. Shrinathji’s idol is carved out from a huge black colored stone and it features numerous animal engravings on it. Two cows, a snake, two peacocks, a lion and a parrot adorn the head of the idol.

The idol of Shrinathji symbolizes the philosophy that one should completely shed his ego and should dedicate himself to Lord Krishna to be set free from worldly miseries. Three sages, one on the left and two on right, flank the idol. At the base of the idol lies a snake. A diamond gifted by Emperor Akbar adorns the neck of the Lord. The jewelry and the clothes of the idol are changed six times a day before offering each prayer service. The image of Shrinathji is treated almost like a living entity and hence its clothes and jewelry are changed regularly and prasads offered after periodic intervals. Aartis accompanied with devotional songs are performed regularly to seek the Lord’s blessings. The temple priests are usually from the Vallabh kul and the management of the temple is directly under the Acharya, the spiritual leader of the Vallabh Sampradaya, also revered as Tilakayata or Gosain Maharaj.

One of the numerous sects of Hinduism, Pushtimarg, is considered as the path of achieving grace in life. This sect was found by Shrimad Vallabhacharya Mahaprabhu, one of the five principal Acharyas of Hinduism. Shri Mahaprabhuji urges us to dedicate all our senses in the service of the Lord. Servitude towards the Lord is believed to remove all doshas (sins) of an individual and helps in attaining the state of Nirodha. Shri Yamunaji is the essential ‘Isht Devi’ of Pushtimarg.

Shri Mahaprabhuji was born in 1478 in the small village of Champaranya, Madhya Pradesh. Right from his childhood, his aura made him very popular and he was thus named as ‘Vallabh’ or the ‘loved one’.

Shrinathji’s idol was consecrated in Vrindavan. Aurangzeb, in the 17th century, took away the idol following which Rana Raj Singh made an effort to retrieve the idol from him in 1672. During the transferring of the idol to a remote location it was believed that the wheels of the cart began to sink in the mud. The very spot where the event took place, the Shrinathji Temple was constructed; since the priest accompanying the idol believed that the spot was chosen by the Lord himself. Thus, in 1672 a new temple was built in the vicinity of the Rajput palace, which today is known as the Shrinathji Temple. Today, the administration of the temple is directly monitored by an independent Board.

As per legends, there are two different versions related to the genesis of Shrinathji Temple. As per the local version, Sage Madhavendra Puri was directed in a dream to find and install the deity of Shrinathji. As per the version of Shrinathji devotees, the arm and face of the deity emerged out of Govardhana Hill. As per Pushtimarg literature version, Shrinathji appeared to Shri Vallabhacharya and directed him to proceed towards Govardhan Hill where he would be able to view and worship Shrinathji.

The influence of Shrinathji is widespread that the Gaudiya preachers of Pakistan found Shrinathji Temples in Dera Ghazi Khan; Russian devotees worshiped Shrinathji in the lower Volga region; Shrinathji was also worshiped in some Central Asian trade routes.

The Shrinathji Temple has three fundamental entrances at Chaupati, Surajpol, and Singhpol. Some religious festivals celebrated here are Janmashtmi, Diwali, and Phooldol. The annakoot ritual is also extremely popular here. Some of the main attractions inside the temple are Sudarshan Chakraraj, Kamal Chowk, Ratan Chowk, Dhwajaji, Moti Mahal, Mani Kotha, and Shri Navnit Priyaji. Apart from this, the Shakghar milk booth and the royal gardens are also worth visiting. The pankhwalas, pichwai paintings and Royal Darshan are some of the most important things to explore around the temple premises.

Shrinathji’s Jhankis (Darshans): There are eight Jhankis of Shrinathji on which he wears the best of dresses and jewelries. His dresses are changed six times in a day and are rarely repeated. Shrinathji sleeps late at night and therefore wakes up late in the morning.

Some of the unique festivals celebrated at Nathdwara are Janmashtami, Holi, Jhulana Yatra, Rath Yatra, and last but not least Diwali. All of these festivals are celebrated with much fanfare and massive numbers of devotees throng the town of Nathdwara to seek the blessings of Lord Shrinathji.