In: Sikh Pilgrimage
With: 0 Comments

Gurudwara Paonta Sahib is one of the holiest places of pilgrimages of the Sikhs and is located on the banks of the Yamuna in the industrial town of Paonta Sahib, Sirmour district, Himachal Pradesh. This place is famous as it was here that Guru Gobind Singh the tenth and last Sikh Guru wrote the Dasam Granth the famous spiritual book of the Sikhs hence it holds a very high historic and religious importance for the Sikhs.

There are many versions as to the origin of the name. One version says that the place got its name from the ornament (anklet) that Guru Gobind Singh used to wear on his foot called Paonta. Another version states that Guru Gobind Singh placed his foot on this land and lived there for five years hence the place was initially called Paontika Sahib, Paon meaning foot and Tika meaning place. It is said that at the invitation of Raja Medini Prakash, Guru Gobind Singh came to the kingdom of Sirmour. The Raja along with his courtiers, merchants, soldiers and entire Sikh congregation welcomed him warmly on his arrival. Guru Gobind Singh was pleased with the love showered on him and he agreed to spend the next five years at Paonta. He described his life in the Kingdom as one of the happiest times of his life and left a written account of it. The grateful Raja then decided to build a fort for the Sikh Guru on the banks of the river Yamuna. The fort was surrounded by a thick forest and inside it was enclosed a Gurudwara. Here the Guru engaged himself in training his warriors, hunting and literary activities. He is said to have written his best literature here like Bachitra Natak, Chandi Di Var, Jap Sahib and Sawayyas which are all part of the Dasam Granth. His eldest son was also said to have been born here. There were more than 50 talented poets and writers in his court.

The Gurudwara complex is spread out across a sprawling campus. The main sanctum is called the Darbar Sahib. The Palki in the Gurudwara is made of pure gold which was donated by a rich devotee. A legendary temple devoted to Goddess Yamuna is also attached to the Gurudwara. There is a prominent place near the Gurudwara for holding poetry competitions called Kavi Darbar. The Talab Asthan was the place where Guru Gobind Singh disbursed salaries. To the left of the Kavi Darbar is the Gurudwara Dasthar Asthan. This was the place where Guru Gobind Singh composed and recited Sodar Sahib (sacred hymns meaning’ the entrance to the Lord’s presence’ which forms part of the prayers chanted by the Sikhs) When he became victorious at the battle of Bhangani Sahib he sat at this place and acknowledged the valour and sacrifices done by his warriors and also awarded them with shields full of gold coins for their great work. This place was also used to hold turban tying competitions and Guru Gobind Singh used to award the persons who tied the best turbans. A museum displaying all items like pens and weapons used by Guru Gobind Singh is present in the temple complex. There is a Guru ka langar hall where langar is served as in all other Gurudwaras.

Holla Mohalla was the name given to Holi by Guru Gobind Singh at Anandpur Sahib and this is celebrated in a grand manner along with Baisakhi festival in Paonta Sahib. The Holla Mohalla celebrations last for three days. The sacred Guru Granth Sahib is given a holy bath with milk and water on the first day of the festival. Gurbani is sung throughout the day and religious lectures are given to the people. Then the Guru Granth is taken in procession for Nagar Kirtan. Cultural activities like Kavi Darbar, Poetry competitions, Dastar competitions(turban tying) etc are held throughout the day. The main attraction of the Nagar Kirtan is the Nihang Sikhs who are dressed in dark blue attire and saffron girdles. They show their sword wielding, horse riding and other martial art skills.

By Air:
The nearest airport to Paonta Sahib is the Jolly Grant Airport in Dehradun that is situated at a distance of 70 km from the city.

By Train:
The nearest railhead is Dehradun Railway Station located at a distance of 45 km from Paonta Sahib. You can avail any train going to Dehradun and hire a cab to reach Paonta Sahib.

By Road:
Paonta is connected to the cities of Chandigarh and Dehradun through National Highway 72. Besides, it is also connected to other towns of Nahan, Shimla, Majra and Dehradun. Taxi services and public transport buses are available at all places.

The beautiful and majestic surroundings attract people from all over the world to Paonta Sahib Gurudwara. Pilgrims imbibe the sacred vibrations of the place which was made sacred by the presence of Guru Gobind Singh. The continuous chanting of the Gurbani and the ambience of the place increase the faith and devotion of the pilgrims who strive to follow the teachings of love and compassion preached by the Sikh Gurus and achieve the goal of life namely self realisation. 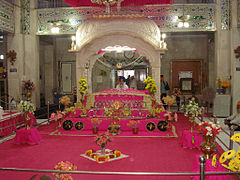 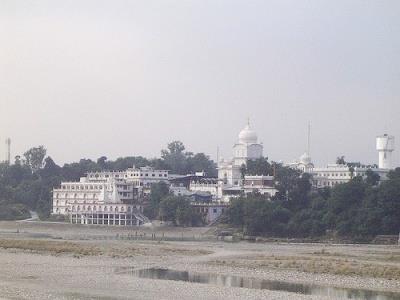