The Gurudwara (Takht) Shri Patna Sahib Bihar is one of the holiest places for the Sikhs as it was the birthplace of Guru Gobind Singh the tenth Guru. Guru Gobind Singh was born on December 22nd 1666 and the Gurudwara was built by Maharaja Ranjit Singh (1780-1839) the founder of the Sikh Empire on the banks of the Ganges River in Patna Bihar. This is one of the five takhts or holy seats of authority of the Sikhs. Guru Gobind Singh set up the new order Khalsa Panth with emphasis on unity and integration and baptised the Panj Pyaras representing the different sections of society on Baisakhi day at Anandpur Sahib.

The site of the present Takht was originally the palatial house of Salis Rai Johri a middle aged jeweller who was highly influenced by the Divine personality and teachings of Guru Nanak. Guru Tegh Bahadur the ninth Guru stayed in the same place on his visit to Patna. Leaving his enceinte wife here he proceeded for Sangat(religious congregation) to the East. Guru Gobind Singh was born here and spent his childhood here until his departure in 1670 for Punjab. Salis Rai then donated the house as a place of worship. Later on Maharaja Ranjit Singh constructed a Gurudwara which was unfortunately destroyed twice by fire and earthquake and finally he built the Gurudwara as is seen today though he did not survive to see its completion. The temple is also called Harmandir or Hari Ke Mandir which means House of God.

The temple was constructed finally by Kar Seva where all Sikhs join together to undertake the task. It is a five storey building built entirely of marble and the sanctum where Guru Gobindji was born has a circumambulatory passage around it. The spacious high ceiling congregation hall is adjacent to it. The arch of the door of the inner sanctum opening on to the congregation hall is covered with gilded copper plates embossed with floral design which matches the marble structure on the interior walls. There are three canopied seats facing the hall and the central one has Guru Granth Sahib placed on it with the Dasam Granth next to it. Both are attended by Granthis holding whisks over them. The Banis (Hymns) are recited seven times a day. There is a hall for Guru ka langar as in all Sikh gurudwaras where Langar is served to all pilgrims. There is a museum housing paintings, relics and artifacts of the Gurus.

Relics and Articles preserved at the Gurudwara

The following worth seeing historical relics/articles are preserved at Takht Patna Sahib.

Air -The distance from Patna international airport and Patna Sahib Gurudwara is 21 kms and one can travel by bus, taxi or auto to reach it.

Rail- Patna Railway station is connected to all major cities and one can travel from Patna Station to “Takht Sri Harmandir Sahib Ji” which is around 13 kms.

There are accommodation facilities for pilgrims in the temple complex. There are also budget, semi luxury and luxury hotels in the city.

The Patna Sahib Takht or Gurudwara is a shrine of extreme importance to Sikhs all over the world as it is a place visited by both Guru Nanak and Guru Tegh Bahadur and also the birth place of Guru Gobind Singh. Thus it has an unmatched reverence for the Sikhs. In ancient times it was also an epicentre for the spread of Sikhism in Eastern India. The faith and devotion of the pilgrims gets enhanced on seeing the holy relics used by the Gurus and the sacred and sublime atmosphere of the place makes it one of the most famous places of pilgrimage for the Sikhs. 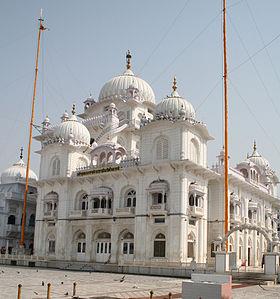 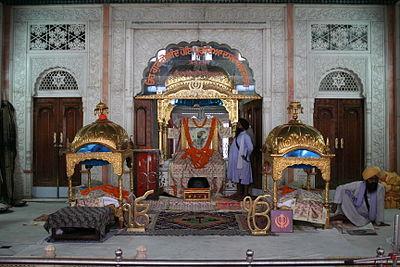