Sikh Places of Pilgrimage – an Introduction

Sikhism is said to be the 5th largest religion in the world in terms of followers and one of the youngest religions. Guru Nanak Dev founded Sikhism during the medieval period and the whole religion is based on the teachings and sermons of Guru Nanak Dev and the nine Gurus who followed him. When India was being torn apart by sectarianism, casteism and religious factions Guru Nanak preached a simple message of ‘Ek Onkar’, We are all one. He preached that there is only one God but many paths and the name of God is Truth ‘Sat Naam’. He taught the Sikhs to bow only before God by linking themselves to the Light of Truth represented by the Gurus whose lives were always in direct communion with God. Guru Nanak was a humble bearer of this Light of Truth and inspired people by his divine songs which touched the hearts of even the most callous listeners. Before passing away he infused his own consciousness to his disciple who then became the next Guru subsequently passing the light on to the next and so on. The word Guru is derived from ‘Gu’ meaning darkness or ignorance and ‘Ru’ meaning light or knowledge.

The way of life propagated by Guru Nanak is to get up early, clean the body, meditate, work and earn by the sweat of the brow constantly remembering God’s name throughout the day, live a family way of life, practice honesty and truthfulness in all dealings and live as a support and inspiration to the entire community by sharing the fruits of labour with others before considering one’s own self.

The place of worship of the Sikhs is the Gurudwara meaning ‘the doorway to the Guru’. The Gurudwaras are situated in different places and each of them has its own importance and significance in Sikh history. Pilgrims come from all over the world to these Gurudwaras to cleanse their souls and for peace and solace. These pilgrimages are made at different time intervals and the pilgrims either travel by foot or by other means of transport.

The Guru Granth Sahib or the Adi Granth is considered the head of the Sikh religion and the Supreme Spiritual Authority rather than any living person. It is considered the living Guru of the Sikhs and is treated with great reverence and respect. The book has about 1430 pages and contains the actual words spoken by all the Sikh Gurus and other saints. Guru Gobind Singh the last Sikh Guru decreed that after his death the teachings contained in the Guru Granth Sahib would be the spiritual guide of the Sikhs.

There are many Sikh temples throughout India.

The most important Sikh places of pilgrimage in India are-

1. Harmandir Sahib or the Golden temple of Amritsar.

There are many Sikh temples outside India. They are in-

Sikhism is based on the concept of brotherhood of disciples and the whole religion is based on the teachings of the Gurus which propagates devotion to God, service to man and surrender to the Almighty. The holy places associated with the Sikh religion strengthen the bond between pilgrims while highlighting the tenets and principles of the religion among the community. The peace and solitude emanating from these places help the pilgrim on his onward quest to truth and self realisation. 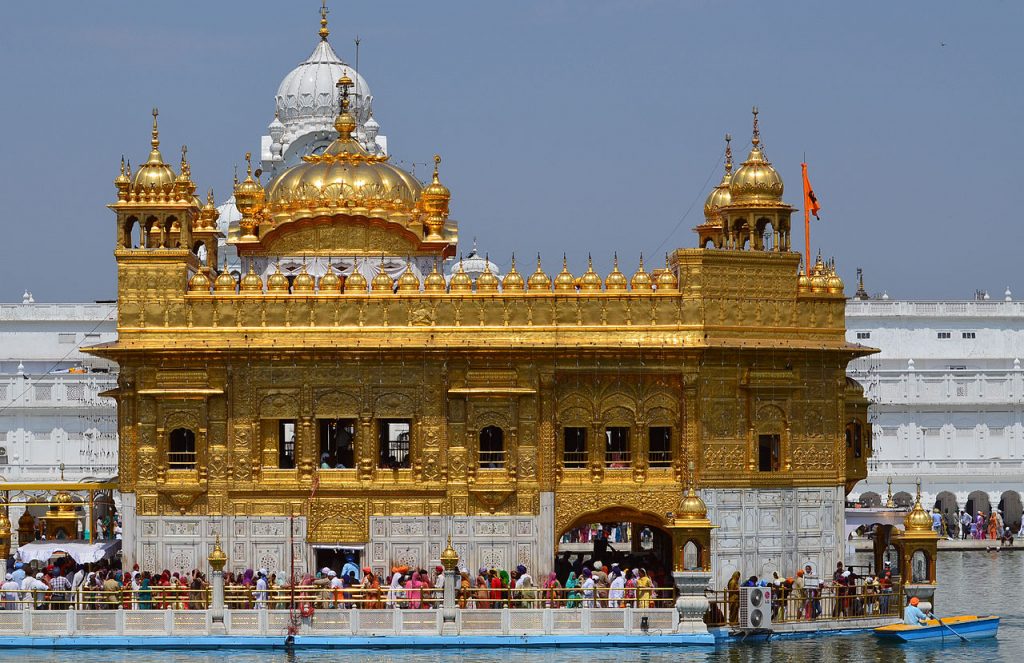