Gujarat, aptly known as ‘the jewel of the west’ boasts of historical, religious and cultural importance, blessed with many fabulous architectural marvels, natural beaches and holy temples.

Somnath Temple in Gujarat is one of the 12 Jyothirlingas of Lord Shiva. The temple is located in the Prabhas Kshetra near Veraval in Saurashtra, in the western coast of the state of Gujarat. Located on the shores of the Great Arabian Sea, the temple is said to have been built by Soma, the Moon.

Somnath is a highly esteemed Hindu spiritual and religious place which finds reference in the many epics and Puranas. The place is home to Somnath Mahadev and it is also the place from where Lord Shree Krishna took his last journey to Neejdham Prasthan Leela.

Jyothirlinga of Lord Somnath is elegantly placed inside the temple, and is adorned with flowers, silver and gold ornaments. Daily Aarti puja performed here to propitiate Lord Somnath is highly revered for its rejuvenating and enlightening elements. The ambience created by reverberating bells, drum beats, and cymbals takes the devotees into a different spiritual mood while singing Shiva Bhajans.

Somnath Temple underwent 4 different phases of construction in history. These are –

The temple has survived the ravages of time. As per archeological facts, the temple of Somanath was looted and demolished six times in the past. For this reason, the temple is given the name ‘the Shrine Eternal’. It is believed that the faith and offerings of Hindu devotees have revived the grandeur of the Somnath Temple and helped the temple survive several attacks in the past.

There are several assertions and controversies attached to the origins of the temple. The temple is said to have been in existence since the ancient times and at different periods the temple acquired different names like Somnath Pattan, Prabhas Pattan and Deo Pattan. But, the name Somnath remained unrivalled in so far as the temple’s popularity is concerned. The maintenance of the temple has always been a priority for its authorities. During the ancient period there was a trend of maintaining the Somnath Temple from the collected revenues of around 10,000 neighboring villages. A large number of devotees used to visit the temple during those times as well. 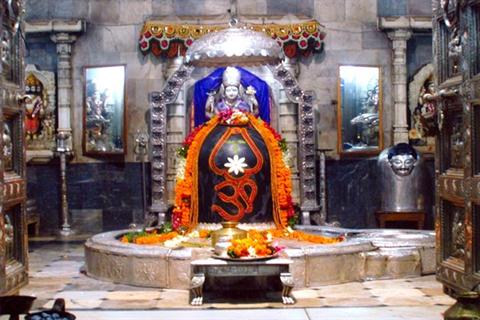 Somnath Temple is dedicated to Lord Someshwar, the name given to Lord Shiva as he adorns his head with the moon. On the other hand, the word Somnath suggests ‘the protector of Moon God’. Shiva resides at the temple in the form of a Jyothrilinga, as the ‘Linga of Light’ and ‘Protector’. It is believed that amongst all the 12 Jyothirlinga, Lord Someshwar was installed first and around 2000 priests have served the idol till date.

Monday is the ideal day for visiting and worshiping Lord Someshwar. A large number of Shaivite saints (sadhus) and other devotees congregate here during various Shiva festivals, including Shivratri (in Feb-March) and Somnath Mahadev Fair (in November). It is believed that propitiating Lord Somnath helps us avert diseases of all kinds, especially worshiping the Lord helps in curing Tuberculosis.

The City of Somnath

The ancient city of Somnath has found mention in many Indian Scriptures and a number of foreign travelers have revealed important facts about their visit to Somnath Temple in their diary.

Hyuen Tsang – During his visit to Somnath between 641AD and 644AD, Hyuen Tsang found the city extremely populated and with a lot of religious, economic and spiritual activities happening around.

Daṇḍin – Daṇḍin was a famous 6th-7th century Sanskrit scholar. In his most famous literary work Dashakumaracharita, he mentions about a flourishing trader from Somnath who owned well-equipped ships for his trade.

Jaun-Ul-Akbar- The famous 11th Century writer from Arab named Jaun-Ul-Akbar has described Somnath saying, “On the coast of Hindustan lies a big city named Somnath, it is as important to Hindus as is Mecca to Muslims”

Marco polo – Most noted 13th Century traveler had also described Somnath as one of the most prominent commercial and religious center of its times.

The museum maintained by the temple authorities preserves significant archeological remains. Several historians and researchers from across the world specially visit the Somnath Temple to inspect its invaluable stone sculptures, pottery and inscriptions belonging to various historical phases.

Sculptures carved on the pillars are named accurately and the walls of the temple are much like turning pages of the various episodes of Indian history.

Somnath temple reflects the underlying architectural skills of Sompuras (masons) of Gujarat. The temple has been demolished many times in the past and the present ‘Kailash Mahameru Prasada Somnath’ is built in a Chalukya Style. The temple edifice is a six storied structure; around 155 feet tall which comprises of Sabhamandap, Garbhgruh and Nrityamandap with Shikhara situated at around 150 feet high.

There was a period when Somnath Temple was the centre of various cultural and religious activities. There were around 500 dancers, 300 musicians and 300 barbers (for shaving pilgrims’ heads) appointed by the temple authorities. As unearthed by archeologists, the temple had been plundered and demolished approx six times in the past. In the year 1024, Ghazni Mohammed looted all its wealth and demolished the temple. The demolition of Somnath Temple indeed set the trend of Muslims razing the Indian temples and Hindus rebuilding them. The periodical plundering of Somnath Temple continued till it was finally plundered by the notorious Mughal ruler Aurangzeb in the year 1706.

As per the records the remnants of this ancient shrine was preserved and rebuilt by Chalukyan Maharaja Shri Mularaja Deva Solanki, Anhilvada Patan. Chairman of Shrimad Aadhya Jagadguru Shankaracharya Vedic Shodh Sansthan in Varanasi, Swami Shri Gajananand Saraswatiji, has supported what is mentioned in Skandha Puran Prabhas Khand that the temple is around 7, 99, 25,105 years old and is a recurrent source of inspiration for many Hindus since time immemorial.

Somnath Temple is believed to have been constructed by Moon god himself. The place Prabhas Teerth where Somnath Temple is located is known to have acquired its name after Moon god gained his brilliancy (bhas) here; the place was later named Prabhas, meaning ‘the exceedingly brilliant’.

The famous legend of Moon is associated with the origins of Somnath Temple. As per the story Moon was married to the 27 daughters of Daksha. However, Moon was partial towards his favorite wife Rohini and ignored all other wives. This made his father-in-law, Daksha, extremely angry and he cursed Moon god heavily owing to which Moon lost his power of light. On Prajapati Brahma’s advice Moon started meditating on Lord Shiva and after his long penance Shiva appeared before him and relieved him from the curse of darkness. As mentioned in the Puranic tradition, Moon god (Soma) built a golden temple to pay obeisance to Lord Shiva for his glory and compassion. It is said that just like waxing and waning of the moon and cosmic dance of Shiva’s creative destruction, the endurance of the temple has been tested time and again.

Another legend associates the story of Shri Krishna with the origins of the Somnath Temple. Lord Krishna was reclining under a Banyan Tree (Pipal Tree), when a Bhil huntsman named Jara mistook him for a deer and shot him in his foot. After limping quite a long way, Lord Krishna reached just above the triveni sangam on the banks of River Hiranya and in a small nearby cave he breathed his last. He was cremated at triveni sangam. The site of his cremation near the Somnath Temple is called Dehotsarg and the site where he was shot is named Bhalka Tirtha. Nearby the town of Somnath, at Veraval, the end of Krishnavatara took place. Some scriptures assert that the last rites of Krishna were performed by his disciple Arjuna at the confluence of Rive Hiranaya and River Kapila.