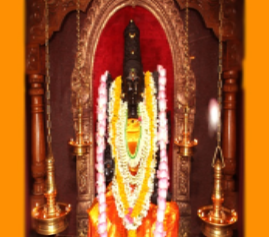 INTRODUCTION
There is a marvellous temple built for Ma Bagalamukhi Mata in Kallidaikurichi, Pappankulam Village in Tirunelveli District at Tamil Nadu. There are only few temples dedicated for Ma Bagalamukhi, one famous temple is situated in Himachal Pradesh, India, one in Karnataka, and another temple is situated in Tamil Nadu. Ma Bagalamukhi is considered as an aspect of Ma Shakti Devi, and she is worshipped in various parts of India. During the time of construction of this temple, Sri Jayendra Saraswati Swamigal was present and he also participated in the pujas performed at this temple.
This temple is properly taken care of by Sri Suryamangalam Advaita Vidya Peetam, located at Virugambakkam, Chennai. As per ancient Puranas, Ma Bagalamukhi contains great powers, and she is worshipped since ancient times. Among her various forms, Bhagalamukhi form is considered as most auspicious, and the holy mother would remove our various problems, cures our diseases and would give all kinds of prosperity to us.
MAIN MANTHRA
Om Hreem Bagalamukhi Swaahaa:
(Navakshari).
Ma Bhagalamukhi is grandly worshipped at this temple during Pournami, Tuesdays and Fridays and on Navarathri and Shivarathri festival days.
Sree Bagalamukhi Devi is worshipped by Lord Brahma, Shiva, Surya, Chandra and Lord Vishnu. In this temple, consecration ceremony was done in a pleasing manner. During the time of worshipping of Sree Bagalamukhi Devi, our mind should not get diverted. We should sincerely worship her, and must tell our problems to her. Ma Bagalamukhi Devi though is considered as our holy mother, but she must be worshipped by us with full of purity in our mind, and we should maintain cleanliness while visiting the temple. Any doing of wrong act at this temple, would make the holy mother to get angry on us, and due to that, she might punish us.
In Sree Bagalamukhi Devi temple, all the permanent Pujas and Homams are being performed by Priests, only after sincerely worshipping her.
“OM SHAKTI PARASHAKTI”
WRITTEN BY
R.HARISHANKAR