Shree Manjunath, a distinct form of Lord Shiva, is the presiding deity of the Sri Manjunatheshwara Temple. The deity present in the temple is in the style of Udbhava Linga. Lord Manjunath represents mythological relationship, religion and scholarship.

Initially built by Birmanna Pergade, a jain chieftain, the Sri Manjunatheshwara Temple was later reconstructed by Devaraja Heggade during the 16thcentury. The Linga of the temple was obtained from Kadri, a place close to Mangalore. As per legend, once Devaraja Heggade invited Shri Vadiraja Swami of Udupi to visit the place and accept some Bhiksha. After observing the Linga in the temple the Swami was very annoyed and refused to accept the Bhiksha, since the Linga was not consecrated as per Vedic rites. On learning about the matter, Devaraja requested Shri Vadiraja Swami to consecrate the Linga.  Highly satisfied by the philanthropic and religious efforts of Devaraja, Swamiji named the place as Dharmasthala or the abode of religion and charity.

There are numerous legends associated with the Sri Manjunatheshwara Temple. Some of them are as follows:

Soon after taking charge as the 21st Dharmadhikari, Shri Veerendra Heggade completed the construction and installation of the 39ft. Bahubali, weighing 170 tonnes, in Dharmasthala.

The Sri Manjunatheshwara Temple is of immense cultural value, because of the fact that the temple follows secular tradition. The current Dharmadhikari himself is a Jain and there is no discriminatory practice that is encouraged by the Temple.

The Sri Manjunatheshwara Temple is also known for the Annadaana, Aushadadaana, Vidyadaana and Abhayadaana. Every single day thousands of pilgrims visit the temple and they are provided with free boarding and lodging in the Netravathi, Vaishali, Sharavathi, Gayatri, Gangotri, Saket, Ganga, Narmada and Kaveri guest houses. All the Annapoorna Choultry pilgrims are provided with free food. The SDMCET Society manages 25 Institutions and some of them are as follows:

Shri Heggade himself is playing a crucial role in reviving the Yakshagana School of art. The secular nature of the Sri Manjunatheshwara Temple is further testified by the fact that the priests of the temple are Vaishnavite Brahmins and the Dharmadhikari himself is Jain.

The monolithic statue of Bahubali in Dharmasthala, symbolizes the existence of religious tolerance and the quintessential spirit of oneness. The presence of the Bahubali statue also signifies the detachment from the material world and spiritual unification of human society at large.

The Heggade of Dharmasthala

The Heggade of Dharmasthala is very unique to the place and is a pious householder with numerous responsibilities. His major responsibilities are to propagate the Dharma in tandem with the command of the Daivas and to ensure that the traditional rituals of the temple are performed daily. The Heggade is believed to be a representative of Lord Manjunatha himself and he has to perform his social responsibilities by adhering to the traditional four danas i.e. Anna Dana, Aushada Dana, Vidya Dana and Abhaya Dana.

One of the duties of the Heggade is also to dispense justice through the settlement of the Hoyulus. The verdicts of the Hoyulus are also accepted by the Civil Courts across the countries. Shri Veerendra Heggade has also established the Dharmasthala Manjunatheswara Dharmothana Trust, for the explicit purpose of preserving and restoring the temples. Shri Heggade also established the Rural Development and Self-Employment Training Institute (RUDSETI) at Ujire, to empower the rural youth. This project is being executed in coordination with Syndicate Bank and Canara Bank.

Originally constructed using clay, laterite and wood the Sri Manjunatheshwara Temple is built based upon the Sapta-Konakana style of architecture. The Mukha Mandap or the primary pavilion of the temple is supported by wooden pillars. The three storied entrance of the temple features sloping roofs further accented by the Kalases.

The other major attractions of the temple are the Manjusha Museum, 11 meter high statue of Bahubali and the Shiva Temple in Karanje and Vasnthamahal.

The major festivals celebrated at the Sri Manjunatheshwara Temple are as follows:

“I wish that the heart and soul of all the people in the world can come together in vanishing all the disparities and other differences we have.  The world has to unite and the world has to think of peace and prosperity in India, especially the district of Dakshina, Kannada.  We have always had a vision for communal harmony, peace, living together and prosperity of all human beings, so that the humanity of the world should be together.  Let’s be together, join together, grow together, and prosper together.  I wish and pray to Manjunatha Swamy to have all the success for your website and through this more understanding, brotherhood, and prosperity to human kind.”

Best Season to visit: October to February, June to September

Address of the Temple: 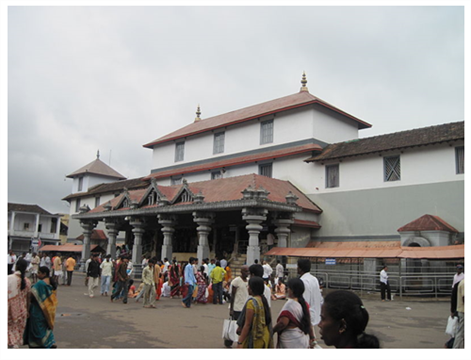