The Sri Ranganatha Swami Temple has a rich historical past, owing to it being the headquarters of the Vaishnava Acharyas. Sri Vaishnava Acharya, Nathamuni is believed to have spent a considerable amount of effort and time in the management of the temple. The Hymns of Thirumalisai Alvar makes explicit references to the temple of Srirangam and its ambience.

It was Thirumangai Alwar who had taken the initiative to renovate the temple structure and the Dasavatara Shrine. Thirumalisai Alvar also played a crucial role in establishing the Adhyayanothsavam. Subsequently, the Pallavas, and later Cholas, the Pandyas, the Vijayanagar Emperors, the Hoysalas and the Nayak Kings patronized and maintained the temple. The Uttamanabhis family of Srirangam has long been associated with the management and administration of the temple. Currently the administration of the temple is under the direct control of the Hindu Management and Endowment Board.

Amongst the numerous legends associated with the Sri Ranganatha Swami Temple, the one mentioned in the religious compilation, Sriranga Mahatmiyam, details the story of how the Ranga Vimanam was installed in the temple. As per the account, Lord Vishnu in a state of deep trance received the gift of Ranga Vimanam from the Supreme Lord. The Supreme Lord also explained to Lord Brahma that there would be seven other abodes with such idols i.e. Venkatadri (Tirumala), Srirangam, Srimushnam Saligram (Muktinath), Totadri, Naimisaranya, Badrinath and Pushkara. The Ranga Vimana idol passed over from Brahma to Viraja, Vaiswatha Manu, Ishwaku, Lord Rama and finally King Vibhishana (gifted by Lord Rama for his loyalty in the war against Ravana). While King Vibhishana was travelling with the idol, the Lord expressed his request to stay over at Srirangam. A Chola King later rediscovered the idol from dense forest and established the Sri Ranganatha Swami Temple in its present form.

The Sri Ranganatha Swami Temple has immense cultural significance, owing to the fact that the temple and the lifestyle of the people are very much intertwined with each other. It is also widely believed that Sriman Narayana dwells in this temple instead of his abode in Vaikuntham. The Sri Ranganatha Swami Temple has the unique distinction of being praised by all the Alwars and has 247 Pasurams or hymns dedicated to it.

Spread across an area of over 156 acres, the Sri Ranganatha Swami Temple has seven Prakaras or enclosures, which are also known as Tiru Veedhis. The enclosures are formed by thick walls running to a length of over six miles. Each of the Prakaras has magnificent towers and also consists of seven rectangular concentric enclosures around the sanctum sanctorum. In total there are 21 towers, which encompass the entire town of Srirangam. The tallest of these towers is the one on the southern side of the town, which is also known as the Rajagopuram. The unfinished gopuram of the seventh enclosure is also known as the Rayagopuram. All the processional cars of the temple are housed in the sixth enclosure. The fifth enclosure consists of the shrine of Manavala Munigal. The fourth enclosure hosts the temple of Venugopala Krishnan. The second enclosure is abundant with natural light and one has to pass through the Southern Aryabhattal to reach it. The first enclosure hosts the images of Sankhanidhi, Padmanidhi, the conch and the lotus of Lord Vishnu and one has to pass through the Nazhikettan Gopura to reach it.

Besides the above mentioned features, the Thirumamani Mandapam, Hall of Thousand Pillars, is one of the attractive features of the temple. Opposite this hall lies the Sesha Mandap, which hosts magnificent and exquisite sculptures. In the Vaishnavite parlance, the Sri Ranganatha Swami Temple is also referred to as Koil.

The major festivals at the Sri Ranganatha Swami Temple are as follows:

To propitiate Lord Ranganatha Swami, a very significant ritual, known as Thulabharam, is performed. As per the ritual, items such as rice, turmeric, dhal, sugar, coins, jiggery, sugar candy etc. equivalent to the weight of the devotee are offered. Devotees can collect items as per their wishes from the Thirukottaram (Granary) and perform the Thulabharam either by collecting slips or by carrying the items to the Lord themselves. 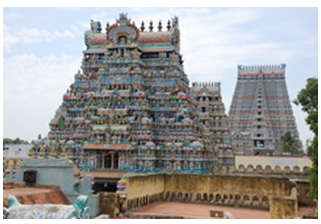 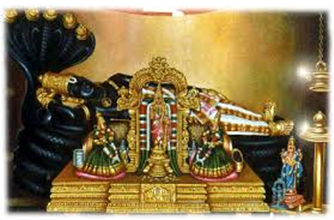