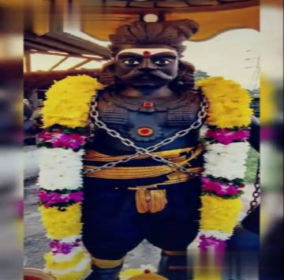 INTRODUCTION
Sri Sangili Karruppana Swamy is a form of Sri Dharma Shasta, and there is a famous temple which is dedicated for him is situated in Namakkal District. In this temple, apart from Lord Karuppanarsamy shrine, shrines for Lord Murugan and his consort Ma Valli and Deivanai, Ma Pon Achchiyamman, are also available in the temple.

During the time of festival, a special puja with Deeparadhana would be performed at Sri Sangili Karuppanarsamy Temple, and devotees would fetch the holy water from the Cauvery River and they would bring it to the temple and used to bath it in the holy shrine of Lord Karruppana, and along with the holy water, Abhishekham also would be performed using milk, curd, tender coconut water, honey and fruit juices. After the performance of Abhishekham, various flowers and flower garlands would be adorned to Lord Sangili Karruppar.
During the festive occasions, large number of public gathering would be present in the temple, and the Holy Prasad items would be offered to the devotees, after the completion of puja to the Lord. Animals would also be sacrificed based on the interest of the devotees, and free food is also offered to all the devotees present in the temple.

In South India, especially in Tamil Nadu, guardian deities like Ayyanar, Madurai Veeran, Karuppanaswamy and Sudalai Madan are worshiped by the people, with much devotion and utmost faith. To some staunch devotees, these guardian deities would also appear on their dreams, and would tell their needs, like building of
temples and performance of pujas to them. The deities also would fulfill their needs with great interest.

Though there are lot of deities present in our holy Hinduism, worshiping the guardian gods is considered as a main activity of the Hindus. Ignoring them in our daily worship is like that of ignoring our grandfather and grandmother in our homes. These deities are also considered as our ancestral deities, and worshiping them would also help us to get rid from Pitru Doshams, and all other type of doshams, and we would lead a fearless and a blessed life.