The Sun Temple in Konark, Orissa is dedicated to the Sun God, Surya. The name Konark is derived from two words i.e. ‘Kona’ meaning Sun and ‘Arka’ meaning Lord. It is widely believed that the Sun Temple was constructed here to commemorate the triumph of rulers of the Ganga Dynasty over the Muslim invaders. The European travelers used to refer to the temple as the ‘Black Pagoda’. Renowned Indian poet, Rabindranath Tagore once had written about the temple as “Here the language of stone surpasses the language of man.” 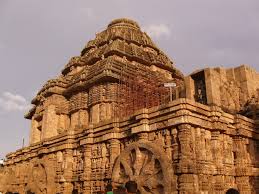 Worship of the Sun God was in existence right from the ancient times. The Sun God, also revered as the Dharam Devata, was believed to be the primary source of life giving energy. The Sun God was also known as Biranchi Narayan. As per the Vedas, Surya is basically the unification of the Holy Trinity i.e Lord Brahma, Lord Vishnu and Lord Shiva. The morning Sun represents Brahma, the Noon representing Vishnu and the evening Sun representing Shiva. This aspect of the Sun God is reflected in the Sun Temple by portraying the three images of Surya on the three sides of the Temple.

The massive chariot along with seven galloping horses in the Sun Temple, represents the flow of time and the seven days of the week. A dozen wheels in the chariot symbolizes the twelve months in a year. Each wheel of the chariot has eight spokes in them, thereby signifying the eight stages in the life of a woman.

Felicitated by the UNESCO as a World Heritage Site in the year 1984 for its “Outstanding Universal Value”, the Sun Temple was renovated to a large extent by the British archaeologists. After the revelation of the temple, the Earl of Ronaldshay proclaimed that, “one of the most stupendous buildings in India which rears itself aloft, a pile of overwhelming grandeur even in its decay”.

Located on the northern side of the temple, the Archaeological Museum of Konark is host to an exquisite collection of 260 antiquities and artifacts. The most prominent amongst them are the highly embellished sculptures of Gods and Goddesses. Images of the Narayana, Gaja-Vyala and the Sun God adorn the corridors of the museum.

Some of the major theories proposed for the collapse of the temple structure are as follows:

In spite of sporadic efforts by the Colonial Government, the comprehensive restoration and renovation of the temple did not succeed. In 1950, a committee of expert was created to look after the restoration efforts in coordination with the Archaeological Survey of India.

Some of the most popular Legends associated with the Sun Temple in Konark are as follows:

The Sun Temple, Konark, is a testimony to the archaic Kalinga School of architecture and reflects the graceful and rhythmic nuances of life. The intricate patterns in the bas-relief of the temple are of immense precision and is considered as a treasure trove for Indian Art and Building connoisseurs.

With an alignment in the East-West direction, the Sun Temple, Konark, was conceived as a massively ornamented chariot of Sun God with twelve giant wheels and seven gallant horses pulling it. Elaborate external projections adorn the main sanctum of the temple. Though the Natya Mandir (Dancing Hall) and Bhoga Mandap (Dining Hall) partially survives, the Audience Hall is very much in shape. The main sanctum of the temple is 229 feet high and the temple compound measures 857 ft. by 540 ft. The images of Narasimha Dev worshipping Sun God, beautiful creepers and numerous animals adorn the temple structure.

Casuarina plantation and natural coastal landscape surround the Temple and the Vimana is ornamented with three life sized figures of Parsva Devata. The image of Surya Narayan (Sun God) is installed on the throne made of black Chlorite, in the sanctum sanctorum. A massive Navagraha slab, with exquisite ornamentation, is placed in front of the Mukhasala (front door). The temple of Mahadevi and Vaishnava is located on the southwestern side of the Sun Temple.

The major festivals celebrated in the temple are as follows:

o   Magha Saptami- Celebrated in the month of February, the Magha Saptami festival is also known as the Chandrabhaga Mela. It is the most popular occasion of the temple and numerous devotees, both domestic and abroad, visit the temple during the occasion of Magha Sukla Saptami.