Sri Adi Shankaracharya (or Sankaracharya, or Shankara, or Sankara) appeared in the spiritual scene of India, when the country was passing through a phase of tremendous spiritual identity crisis. This chaos was further catalyzed by the emergence of new faiths. Sri Adi Shankaracharya is recognized as one of the greatest Indian philosophers and his philosophy of Advaita is considered as the very foundation of Hinduism.

A shrine dedicated to Sri Adi Shankaracharya Temple was constructed at Kalady, Kerala, at the very location where he was born and lived the earlier parts of his life. It is situated on the banks of the River Periyar and is also dedicated to other Gods and Goddesses including Goddess Saradamba.

Sri Shankaracharya was born to a Nambudiri Kerala Brahmin couple Sivaguru and Aryamba. At the mere age of 16 he had mastered the Vedas and was predicted by astrologers to become a Sarvajana or an all knowing saint. Later he established four mutts across the country i.e. Joshimath, Sringeri, Dwaraka and Puri. He was also given the honorific title of Jagadguru.

He played a very significant role in rescuing Hindu religion from superstitious degeneration. His philosophy of Advaita is considered to be the very foundation of Hinduism. His commentaries on the Vedas and the Upanishads are of significant relevance. Adi Shankaracharya was a master metaphysician, dexterous logician, ingenious philosopher and a massive moral and spiritual force. The philosophy of Adi Shankaracharya can be described in the verse: “Brahma Satyam Jagan Mithya Jivo Brahmaiva Na parah—Brahman (the Absolute) alone is real; this world is unreal; and the Jiva or the individual soul is non-different from Brahman.”

The only fact that is certain about Adi Shankaracharya is his birth place and family. There is no factual evidence to suggest the age he belonged to. There are two schools of thought i.e. the first suggests that Sri Adi Shankaracharya lived about 2500 years ago and the other suggests that he lived during the 8th Century A.D. The same controversy also exists regarding the attainment of Samadhi of the great saint.

The town of Kalady was obscure until the tireless efforts of Jagadguru Sri Sachidananda Shivabhinava Narasimha Bharathi Swamigal, the 33rd Peetathipathi of the Sringeri Guru Parampara. Another revered figure who brought the town to the forefront was Sri Moolam Thirunal Ramavarma Maharaja of Thiruvitamcore. Their endeavor made Kalady an international pilgrimage hub. Under their supervision two temples were established at Kalady i.e. one dedicated to Sri Adi Shankaracharya and other to Goddess Saradamba. The Kumbabhishekham for the temples were performed on the auspicious Magha Shukla Dwadasi day in the year 1910. The Maha Swamiji also established the celebration of Sri Shankara Jayanti and Navaratri at Kalady.

The other developments that took place in the recent past include the following:

There are numerous legends associated with Sri Adi Shankaracharya. Some of them are as follows:

The Sri Adi Shankaracharya Temple at Kalady is of tremendous cultural significance, as it symbolizes the great Sri Adi Shankaracharya and his massive contribution to Hinduism. The temple commemorates the great deeds of the Sadguru and his tireless efforts directed towards the upliftment of human spirituality. The Sri Sadvidya Sanjivini Rig Veda Pathshala is also a very unique institution, disseminating the knowledge of the Vedas and the Shastras in the traditional method.

The other major pilgrimage sites of Kalady are as follows:

The major festivals celebrated in the Sri Shankaracharya Temple are as follows: 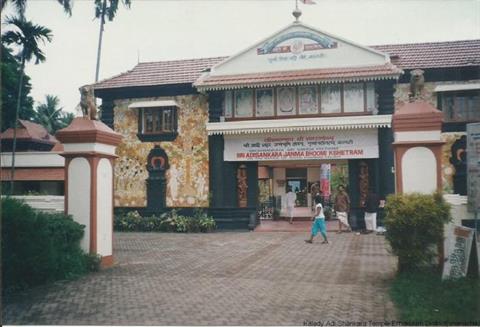