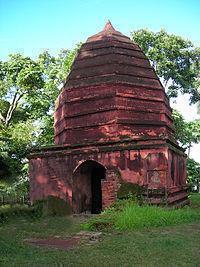 The state of Assam lies along the foothills of the Himalayas in the Brahmaputra valley. Its history dates back to the Vedic period. Shaktism, Shaivism and Vaishnavism flourished in the state with many temples and monuments being built reflecting the great architecture of the Koch, Kachari and the Ahom dynasties. One of the most famous temples of Assam is the Umananda temple in Guwahati. It is dedicated to Lord Shiva and is located at the Peacock Island (Urvashi Island) which is said to be the smallest inhabited riverine island in the middle of the River Brahmaputra opposite the Kachari Ghat. It lies atop the Bhasmachala hill or the Hill of ashes.

According to the Kalika Purana which is one of the Upapuranas dedicated to the worship of Goddess Kali and her manifold forms, Lord Shiva is said to have sprinkled Bhasma (ashes) at this place and imparted knowledge to Goddess Parvati. He is said to have resided here in the form of Bhayananda. When Shiva was in meditation on this hillock, his yoga was interrupted by Kamadeva and in anger he burnt Kamadeva to ashes. Hence, the hillock got the name Bhasmachala or Bhasmakuta. The Kalika Purana states that Goddess Urvashi brought the Amrit (nectar) for the enjoyment of Goddess Kamakhya and the Urvashikund is situated here. The island thus got the name Urvashi Island.

The temple was built during the Ahom dynasty under the rule of the King Gadhadhar Singha in 1694 AD by the Bar Phukan Garhganya Handique. An earthquake in 1897 immensely damaged the temple but it was later reconstructed by a rich local merchant who even got the interiors of the Shiva temple inscribed with Vaishnavite slogans. It is said that the Mughal Emperors Jahangir and Aurangzeb donated money to the priests of the temple during their occupation of Kamrupa which was one of the historical kingdoms of Assam in ancient times.

The main shrine is reached by a flight of steep steps. Rock cut figures and sculptures of various Gods like Surya, Devi, Ganesha, Shiva, Vishnu and his ten incarnations are seen in the temple. The Devi shows a scorpion as an emblem. They reflect the exquisite craftsmanship of the artisans. The presiding deity of the temple is Umananda (Shiva) who is referred to as Tatrasti Bhagavan Shambu Ruma Nandakarah Prabhu.

Worship of the Lord on that Monday which coincides with Amavasya is said to be most auspicious. Shiva Chaturdashi and Maha Shivaratri are celebrated annually in a grand manner in the temple with devotees coming from all over the country to worship the deity.

Air – The nearest airport is the Guwahati airport from where ferries which are arranged by the State tourism dept are taken to reach Peacock Island.

Rail – The nearest railway station is at Guwahati which is connected to all major cities of the country.

Road – Buses and taxis are easily available to reach Guwahati.

There are excellent accommodation facilities in Guwahati with hotels of all budgets to suit the convenience of the pilgrims.

Among the many famous temples in Assam, the Doul Govinda Temple dedicated to Lord Krishna is well known. It is located on the northern banks at the foothills of Chandrabharati hill at Rajaduar in North Guwahati. This revered temple is visited by pilgrims from all castes and communities and the Lord is believed to fulfil the desires of all those who pray at this holy shrine with faith and devotion.

According to legends, every day just before dawn, in the quiet woods of Sandhya Jhar near village Jekeria in Kamrup district, a cow used to free herself from the rope which was used to tie her to the cowshed. She would then proceed to a fixed spot from where milk flowed from her udder on to a Birina grass bush. The Sadar Amin (the officers who were granted special powers as judges and law officers by the British) of Nalbari, Gargaram Baruah heard about this rare phenomenon and set out to investigate on the back of an elephant. When he got the spot excavated, he is said to have found a magnificent idol of Lord Krishna playing flute. With great reverence, he brought the image in a ceremonial procession to his village Rajaduar and as per his Guru’s advice installed it with rituals and worship. Meanwhile, the Holi festival was approaching and the villagers were in a dilemma whether to instal the new Krishna deity or the original Lord Shyam Rai of Namghar which had been in use the preceding years. The priest prayed for a solution and when the temple doors were opened in the morning, it was found that the new image was placed a few inches above the old image in the altar. The new image was then referred to as the Doul Govinda. It is said that later the old image fell down from the altar with the hand broken thus indicating the self-removal of the idol from the sanctum of the Mandir.

The walls of the temple are decorated with exclusive sculptures and the rock walls have engravings and portraits of Lord Krishna depicting many aspects of his life.

Thousands of devotees gather to offer worship especially in the months of Magh and Phalgun and in Bohag. Prayers and rituals are conducted daily and Bhog or Prasad is offered to the Lord which is then distributed to the pilgrims. Lamps and dhoop (incense sticks) are individually lit by all pilgrims and placed in front of the shrine presenting a beautiful spectacle, especially after sunset.

The temple is managed by a committee who look after the administration and financial management of the temple. They undertake development activities for the convenience of the pilgrims.

Janmashtami, Maghi Purnima and Dol Jatra or Fakua are some of the festivals which are celebrated in a grand manner in the temple. During Dol Jatra, the deity is taken out of the sanctum and placed on the doul which is a separate altar at a little distance. For five days, puja, Archana and Aabir or Faku powder which is a pinkish vermillion type powder is offered to the Lord. On the last day, the Lord is taken around in procession All night Assamese dance dramas called Bhaonas are performed with singing of devotional songs during the day.

Air – The nearest airport is the Guwahati airport.

There are hotels of various budgets to suit the conveniences of the pilgrims. 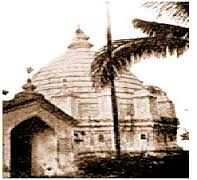 The Asvakranta temple situated in North Guwahati is one of the famous temples of Assam and is dedicated to Lord Vishnu. The name Asvakranta means ‘dedicated to horses’ and according to the Yogini tantra which is a Tantric text which is dedicated to Goddess Kali and Kamakhya, all sins are wiped out at this holy place and worship at this holy temple ensures salvation for all. According to some legends, the name Asvakranta is said to be associated with the Krishna Rukmini episode as Krishna’s Asva (horse) was encircled (akranta) by his enemies at this place.

According to legends, Lord Krishna is said to have camped at this place with his army before he defeated and killed the Asura Naraka who was the son of Bhudevi and Varaha the third Avatar of Vishnu. The legend of Narakasura is important in the history of Assam particularly Kamrupa which was an important Kingdom in ancient India since he is stated to be the originator of many dynasties which ruled Kamrupa in historical times. He was the King of Pragjyotishapura or Kamarupa Desha and ruled well but later became friendly with Banasura, the Shaivite King of Sonitpur. He then became evil and began to harass holy men and neglected the worship of Goddess Kamakhya. He even refused to permit Sage Vasishta to visit the temple whereupon the sage is said to have cursed him that his own father Lord Vishnu would be responsible for his death. When his evil atrocities increased, Vishnu took the Avatar of Krishna and killed Naraka. He then installed his son Bhagadatta or Bhagirath on the throne of Pragjyotishapura.

The temple contains the image of Lord Vishnu in a reclining pose as Anantashayin wherein a tortoise, frog and waterweed is supporting Ananta. The lotus which has sprung out from the navel of Vishnu has the four-faced Brahma seated on it. In one corner, Devi or Mahamaya along with the two demons Madhu and Kaitabha are standing. Kneeling down at his feet with folded hands are seen two rows of Nagakanyas. A Prabhamandala (the ornament placed behind statues to give it a hallowed effect) which is arch shaped surrounds the scene.

Road – The temple is linked by road via the Saraighat Bridge across the Brahmaputra. Regular bus services from all major cities to Guwahati are available. Regular ferry services are also available from Guwahati.

Facilities for accommodation are available at reasonable prices with different hotels to cater to various budgets.

The temples of Assam stand testimony to the great cultural and historical heritage of Assam. The rock sculptures, architectural styles and inscriptions reflect the glory of the ancient dynasties that ruled them. These temples are soaked in mythology and pilgrims who pray at these sacred places with faith and devotion believe that their desires will be fulfilled.