Temples of Haryana: Temples of India reflect the cultural glory and history of a place. It is a sacred place which enables pilgrims to get away from the vicissitudes of life and reflect on the inner self.

One of the most famous temples of Haryana is the Markandeshwar Mahadev temple in the Kurukshetra district of Haryana.

It is located in the town of Shahbad Markanda which lies on the banks of the Markanda River which is said to be a part of the ancient Saraswati River and a tributary of the River Ghaggar.

It is dedicated to Sage Markandeya who was a great devotee of Lord Shiva and who is well known in Hindu mythology as the one who defeated death through faith and devotion. 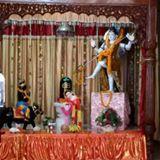 The temple is said to be at the place where Markandeya worshiped Lord Shiva at the time of his destined death at the tender age of sixteen years. He wished to win over Lord Yama, the God of death and change his destiny.

When Yama and his attendants came to take Markandeya’s life at the appointed time, he clung to the Shiva Lingam and the noose fell over the Lingam.

Shiva appeared before them and pierced Yama with a trident and saved his devotee. Shiva then revived Yama and blessed Markandeya to enjoy immortal life as a Chiranjeevi.

The Markandeya Purana, Bhagavatha Purana and the epic Mahabharata relate this exemplary story of devotion and perseverance. This temple is said to have been founded in the 3rdmillennium BC in pre-Mahabharata times.

The temple is made of marble and has an exterior arch welcoming pilgrims. It has a Shiva Linga with Lord Shiva’s idol and young Markandeya in a prayerful posture. The walls of the temple depict a scene of Lord Shiva saving the child Markandeya from Yama, the Lord of death.

Pilgrims visit the temple in large numbers in the month of Shravan (July/August) and on Sundays to offer worship.

Air – Chandigarh airport is the closest airport to Kurukshetra at a distance of 100 km.

Rail – The Ambala Cant Junction is the closest railway station which is at a distance of 19 km from the temple.

There are a number of hotels of various budgets to suit the convenience of the pilgrims.

This temple is dedicated to Mata Mansa Devi, one of the forms of Shakti in the district of Panchkula in the state of Haryana. 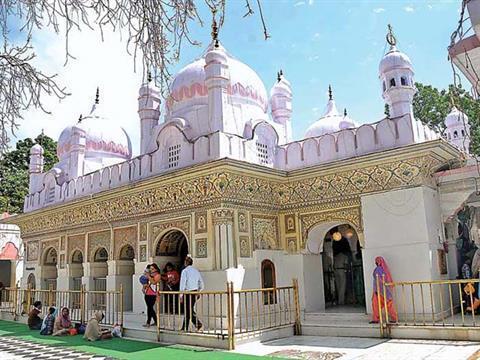 The temple which is situated in the foothills of the Shivalik ranges in the village of Bilaspur in Panchkula was constructed by Maharaja Gopal Singh of Manimajra during the period 1811-1815.

Features of the Main temple

The main temple dedicated to Mata Mansa Devi is worshipped in the sanctum sanctorum along with Devi Saraswati and Lakshmi as Pindis (Stone pebbles).

In recent times, a marble bust of the deity beautifully decorated with crown and ornaments has been sculpted. The bust is enshrined in a small silver plated vault.

The temple has been built in the ‘Panchayatana’ pattern (Moghul style architecture) in which four shrines stand at four corners with the fifth shrine located in the centre instead of the usual ‘Nagara’ or curvilinear spiral temples prevalent in the Shivalik region at that time.

The temples have four minarets at four corners with a cupola on its top. Standing on an elongated circular drum are onion shaped domes. The temple facade shows miniature vaulted alcoves.

There are murals on the walls of the Mansa Devi temple of Navagrahas, Nakshatras, themes from Puranas and epics.

Other temples (Temples in Haryana)

There is another temple referred to as the Patiala temple which is at a distance of 200 metres from the main temple. It was constructed by Shri Karam Singh who was the Maharaja of Patiala in the year 1840.

It has a typical Nagara style architecture prevalent in the region with a curvilinear spire and miniature shrines decorated on its entire body. The Pancharatha style has four projections on its four sides.

can also check languages in Haryana

It bears semi-pyramid conical spires on the top called Shikhars and it has an open Parikrama. The other temples in the complex are Shiva temple, Hanuman temple and small ones dedicated to Naina Devi, Kali Devi and Vaishno Devi.

Adjoining the main temple is a beautiful garden with sacred plants. There is a pond or Sarovar in which pilgrims take a holy dip.

There are designated queues formed for pilgrims to have darshan in a convenient manner. Pilgrims are allowed to make offerings which is consecrated in front of the Goddess and then returned to them.

There is a Hundi (collection box) placed to facilitate the donations of the pilgrims. There are three Bhandaras or free kitchens by private bodies which offer food to pilgrims free of charge.

Two Navratra Melas are organised for nine days from morning to night during the Ashvin (winter) and Chaitra (spring) months by the Shrine Board. Arrangements are made for food, housing, medical and other arrangements by the board to accommodate the heavy rush of pilgrims.

The Mata Mansa Devi Shrine Board

The day to day administration of the Shrine complex is looked after by a Chief Administrator who is assisted by the chief Executive Officer and Secretary.

The board has restored and renovated all the shrines in the temple complex, undertaken beautification and landscaping with dancing musical fountains and built multipurpose halls for various activities of the temple like Yajna Kendra, Dhyan Kendra and dormitories for the pilgrims.

Many welfare schemes are carried out by the board including the donation of various articles given by pilgrims to poor families or during marriages to girls of poor families.

A number of projects like building of tube wells and dormitories, expansion of the pond (Sarovar), building a ceremonial gate is being undertaken to help pilgrims.

A dispensary and a police post are also maintained in the complex by the board to ensure smooth functioning of the temple activities and to assist pilgrims.

Air – The nearest airport to the temple is the Chandigarh International airport which is at a distance of 20 km.

Rail – The nearest railway station is the Chandigarh station which is at a distance of 7 km from the temple.

The Shrine has two Dharamshalas, one free and the other with an nominal charge.  Besides this, there is a dormitory style accommodation near the temple constructed by the Haryana Tourism Corporation for pilgrims.

The Markandeshwar Shiva temple and the Mata Mansa Devi temple of Haryana are two well-known temples of Haryana where pilgrims come to offer prayers from all over the country.

The faith and devotion of the pilgrims create a spiritual current which helps all those offering prayers at the temple to concentrate and focus one-pointedly on the Deity unaffected by the trials and tribulations of everyday life.