Manipur is one of the North Eastern states of India and is called ‘a jewel of India and Switzerland of the East’ as it is surrounded by green hills, deep valleys, cascading waterfalls and exotic blooms. It has many famous temples which attract pilgrims from all over the country. One of the most famous and largest Vaishnavite temples in Manipur is the Shri Govindajee temple in the capital city of Imphal dedicated to Lord Govindajee (Krishna). 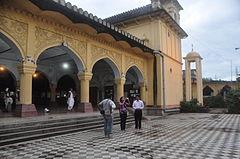 In the 17th century, Maharaja Jai Singh, the then Manipur King who was a great devotee of Lord Krishna was said to have received divine inspiration from the Lord to build a temple for him. He then initiated the carving of an idol for the Lord in 1776 which was consecrated in a temple built by him in his palace in 1779 with celebrations and Ras Lila dances for five days.  The temple was commissioned by Maharaja Nara Singh of the Manipur kingdom in the year 1846 and was dedicated to their royal deity Lord Govindajee. Later it was substantially damaged during an earthquake and was rebuilt to its original design subsequently after his death by his successor. The idols were removed from the temple during the Anglo-Manipur war but were later reconsecrated in the temple by the new King Maharaja Churchand Singh after the war.

The temple is built in an ideal location with a pond in the vicinity and a large open space with a well-tended garden with tall trees planted along the boundary. It is built on a high platform over a square plan. The temple is built with bricks and mortar and its entrance faces East. The outer chamber and porch are built with huge columns in an arcade system. The sanctum sanctorum is compartmentalised with two short walls and is surrounded by a circumambulation or Pradakshina path. Over the path in front of the portico roof is the first row of railings above the cornice. Small shrines or ‘Salas’ are built at the four corners of the railings. Above the sanctum, the walls extend to the terrace and are then formed into two arched domes whose external surfaces are gilded with gold. Around the two domes is a second row of railings at a higher level.   Each of the domes is crowned by an Amalaka Sila (a circular stone disc with ridges on the rim) and topped by a Kalasa (finial). Above the Kalasa, a white flag is hoisted. There is a separate bell tower next to the temple.

An elegant pillared outer pavilion with arcades usually known as a Mandapa faces the facade of the temple to the East. It is built within the enclosed precincts of the temple though it is an independent double storeyed structure. At the first floor level it is covered by a protective railing. A row of elephant heads are provided at the cornice level of the first floor which support the inclined floor slabs. There is a mini temple tower built as an extension of the mandapa. On the eastern and southern sides of the mandapa, seating arrangements are built to accommodate devotees who throng the temple to witness the religious and cultural programmes. The covering of the roof is made of corrugated cement sheets. There is another Mandapa which is a structure with arcades called the Natyashala which has idols fixed at the four corners of the roof.

The central chamber of the sanctum sanctorum has images of Govindajee with Radha carved out of special wood. In the adjoining Northern chamber are installed the images of Jagannath, Subhadra and Balabhadra which are carved out of the remaining special wood.  The Southern chamber has images of Balabhadra and Krishna made of Plaster of Paris in colourful shades. The front of the sanctum has an arcade covered with a curtain. The images are covered with crowns or Mukuts on special festival days.

Highly ritualistic and disciplined worship is followed in the temple every day. The temple doors are opened with the ringing of the bell in the temple tower and the blowing of conches. The curtained door in front of the sanctum is then opened revealing the main images. Devotees line up on either side of the main shrine with men and women separately on either side. Strict dress code is maintained by the devotees with the men allowed to wear white shirt or kurta in a light shade and a dhoti while women have to wear sari or salwar kameez or the traditional Pungou phanek and Innafi. Women usually carry offerings to the deity in a brass plate. During main prayer hours, live music by temple musicians is a regular feature in the temple. An ethnic group of Manipur known as the Meithis are ardent devotees of the Lord of this temple.

Janmashtami festival and Rath Yatra or Kang during June-July are the most important festivals celebrated in the temple. During Kartik Purnima, Basant Purnima and Holi (Halangkar), Ras Lila dances are held in great enthusiasm in the temple precincts. The deity is brought out onto the grounds at the sacred Kaina which is a location 29 km from Imphal where Maharaja Jai Singh was said to have been directed in a dream by Lord Govindajee to carve out his image from a jackfruit tree and enshrine it in a temple.

Air – The nearest airport is the Imphal airport which is at a distance of 7 km.

Road – There are bus services from Imphal to the temple.

Accommodation – There are a number of hotels in Imphal of various budgets to suit the convenience of the pilgrims.

Shri Hanuman Thakur temple is one of the famous temples of Manipur situated on the bank of the Imphal River among the groves of the Mahabali forest (Mongba Hanba). The Hanuman statue here is said to be the second highest in Manipur. It is said to be one of the last evidences of the Ramanandi sect of Vaishnava Sampradaya of worship of Manipur and hence is of great importance in the history of Manipur and was built during the reign of Garib Niwaj.

It was built in the year 1725 AD by Garib Niwaj, the King of Manipur. According to Cheitharol Kumbaba which is the official royal chronicle of the Kings of Manipur, the sculpture of Hanuman was carved out of a big stone slab and enshrined in the temple. The Lord is shown in human form in full size in dancing posture in the style of a Hindu priest wearing a dhoti.  The head has tangled knot of hair and around the neck there are three Rudraksha Malas. The right hand has the Gada (mace) and the forehead has a distinct tilak. The image has a long tail and the colour combinations and design make the idol look attractive.

It is built of bricks and later the entire structure has been coated with cement. The structure of the main temple has been overshadowed by a recent construction of a Mandapa. Thus the pedestal of the temple is not visible from outside. On entering inside, a rectangular base for the sanctum and the porch can be found whose walls have been raised as a rectangular structure up to the roof. A triangular window having nine slits is present in the Eastern and Western walls. A dome faced hemispherical roof covers the sanctum cube hall. The porch hall roof is barrel vaulted type and not dome shaped. The distinct arches which are visible through their raised ridges on the surface of the roof from above converge at the base of the crown. A double lotus crown in criss cross pattern is present at the top of the roof. Over the crown are the Kalashas which carries the pinnacle with Nilachakra (blue discus).

Hanuman Jayanti is celebrated with great pomp and reverence at the temple. Devotees come from all over the state to offer prayers and take part in the celebrations.

Air – The nearest airport is the Imphal airport which is at a distance of 6 km from the temple.

Road – Imphal is connected by the national highway to other cities and towns. Bus and taxi services operate to the temple.

There are lodges and hotels in Imphal to suit the convenience of the pilgrims.

One of the most famous temples of Manipur is the Vishnu temple at Bishnupur. It is one of the oldest temples and stands as a symbol of the glorious legacy of Manipur situated near the Bishnupur police station. It has been declared as a National Monument under the Archaeological Survey of India.

Bishnupur earlier known as Lamlangdong or Lamangdong was once the capital of the Meities King Kyaamba. He ascended the throne in 1467 AD after an alliance with the Pong King who gave him an image of Lord Vishnu along with the fruit Pongdon (guava) and Ponghawai (a kind of pulse). The King then requisitioned the service of Brahmins and built the temple in 1507 AD. Thus it is said that it was in the reign of King Kyaamba that the worship of Vishnu began in Manipur.

The temple is made of good quality brick and mud plaster and shows influence of Burmese architecture. The pedestal consists of concentric arrangement of a series of five brick layers. The cornice forms a beam of these five brick layers. The temple body is in two storeys over the pedestal, the lower sanctum cube or the lower Jangha and the upper sanctum cube or the upper Jangha with the porch in front reaching up to the cornice in its height. The East, West and North walls have corbelled arch (a structural piece of stone, wood or metal jutting from a wall to carry a super incumbent weight, a type of bracket). There is a window made to form three slits by placing two bricks longitudinally at a parallel distance below each corbelled arch. The facade is facing South and there are two false windows on each side. There is a single long rectangular and half way perforated window on the Southern wall. The solidity of the interior walls blocks the holes hence light does not enter the sanctum hall. The upper Jangha has a roof constructed in a parabolic style with semi circular arches which forms a dome like structure. The sanctum hall opens to the portico through a door opening and is a four sided figure. The sanctum sanctorum or Garbha Griha has three windows on the East, North and West sides and its walls are straight up to the point of the neck by perpendicular stepping up of the courses of brick layers.

Air – The closest airport is Imphal airport which is at a distance of 32 km.

Road – There are buses connected to the temple via NH 39 and NH 53.

There are a number of hotels and lodges in Imphal to suit the convenience of the devotees.

The temples of Manipur which proliferated after the 15th century with the patronage of the local Kings reflected the architecture distinct to the North East region of India. The ambience of the temples reflects the peace and serenity of the ancient monuments and pilgrims throng these temples to imbibe the sacred atmosphere of the place which has been preserved for posterity by the Government in conjunction with the archaeological society of India.