Punjab is one of the states situated in the North Western part of India. Known as the ‘land of five rivers’ it is famous for its religious diversity. It is home to various places of historical importance and religious significance. The ‘Panch Mandir’ or Five temples in Kapurthala town of Punjab is one of the most revered places of worship and is dedicated to several Gods and Goddesses. Its rich architectural legacy bears testimony to the greatness of a bygone golden era.

Architecture and Layout of the Temple

The beautiful white temple displays the architectural and engineering skills of the artisans of the 18th century. It was built by Sardar Fateh Singh Ahluwalia who was the ruler at that time. There are five small temples dedicated to different Gods and Goddesses. It is said that a rare idol of Surya and an idol of Brahma can be found here. The giant structure in the centre is surrounded by many small temples. The striking aspect of the temple is that it has been built so skillfully that one can pay obeisance to all the 5 idols from the entry door. The shrine along with the assembly hall constitutes the prayer hall of the devotees. To the North side of the temple, there is a two storey building in which the office area and visitors area are located. Kitchen facilities are available adjacent to the office building. Prayers are performed in the morning and evening attracting devotees from all over the country. This temple also attracts archaeologists who come to study the architecture and traditions of those times. The pristine cleanliness and serenity of the temple provides a haven of peace for pilgrims.

Air – The nearest airport to Kapurthala is the Amritsar International Airport which is at a distance of 66 km from where taxis, buses or trains can be taken to reach the temple.

Road – The bus stand is at a distance of 5 km from the temple and taxis and cars can also be availed of to reach the temple.

The temple offers food facilities and accommodation to the pilgrims. There are also a number of hotels near the temple to suit various budgets of the pilgrims.

At the end of the Vedic period, worship of nature and ritual sacrifices was replaced by the worship of deities. Gods became the central figures of Hinduism and temples became the dwelling place of these Gods (Devalaya). Temples were considered the very centre of the community and were generally patronised by the ruling dynasties of those times through endowments and land grants. They first began with humble caves and flat roofed temples which later evolved over the centuries into huge structures with intricate architecture, decorative gateways and monumental towers. One of the most famous temples of Punjab is the Durgiana Mandir also known as the Lakshmi Narain Temple situated in the city of Amritsar. Goddess Durga (Shitla Mata) was generally invoked when the soldiers went to war for their protection and good health. This temple is centrally located in the city and easily accessible to all and is also referred to as Shitla Mata Mandir. 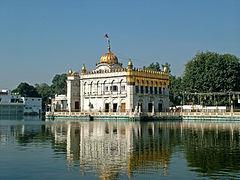 The temple is said to have been constructed in the 16th century outside the Lohgarh gate in Amritsar. Later it was rebuilt by Guru Harsai Mal Kapoor in 1921 which was inaugurated by Pandit Madan Mohan Malviya, the Hindu philosopher and reformist on Ganga Dashami day. The statue of Guru Harsai Mal can be found in a sitting position just opposite the Darshani Deori or the main entrance.

The temple is similar to the Golden Temple and is built in the middle of a sacred lake with similar gilded dome and canopies. It is made extensively of marble. The temple is referred to as the Silver Temple because of its large and exquisitely designed temple doors. There are nine gates in this temple made of silver in an artistic manner. There is a bridge that connects to the temple. Colourful lights illuminate the dome. It has a rich collection of Hindu scriptures. It is named after Goddess Durga and has idols of Lakshmi, Narayan, Hanuman, Ram, Sita, Lakshman, Bharat, Radha Krishna, Shiva and Satyanarayan and hence is also popularly known as the Lakshmi Narain Temple. Lord Ganesha rests on one side of the Darshani Deori. In the rear of the temple is a Beri tree with devotees worshipping this tree to get their desires fulfilled. Pilgrims visit this temple from all over the country especially during the holy festival of Navratra. Kar Seva performed regularly ensures periodic cleaning of the pond. Fountains are fitted with coloured lights which look attractive in the night.

There are many idols along the Parikrama like Lakshmi and Vishnu on the snake bed in the ocean, Krishna showing his Virat Swarupa to Arjuna, Hanuman carrying the Sanjeevani mountain, Ahalya’s salvation, Chaitanya Mahaprabhu singing, Dhruva getting darshan of Vishnu, Rukmini and Sathyabhama in the Tulabharam incident, Shiva offering spiritual knowledge to Parvati, the four sons of Brahma, Shabari offering fruit (ber) to Rama, Narsimha Avatar and Maharishi Valmiki teaching Luv and Kush. At the extreme rear of the temple is the idol of Sant Goswami Tulsidas. Ramayana is recited here daily. Ved Katha Bhavan with a beautiful stage has been constructed where religious leaders give discourses and music festivals are conducted. Next to this is the Langar Bhavan where pilgrims are offered langar or holy food. It is believed that Charnamrit received from this temple cures all ailments. 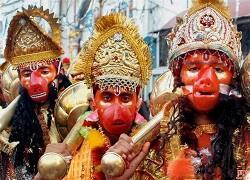 The festival of Holi is celebrated with gaiety and fervour at the temple with an idol of Krishna being carried in a palanquin. The Langoor festival dedicated to Lord Hanuman is celebrated here with children dressed as Langoors or monkeys paraded around the city. It concludes at the Hanuman temple in the Durgiana temple complex. The Sathyanarayana Katha is recited every full moon day.

The Shree Durgiani Committee undertakes a number of social activities like the Sanskrit College which imparts Sanskrit education free of cost with free boarding and lodging, the Shree Lakshmi Narain Stitching school providing free training especially for widows to earn a livelihood, an Ayurvedic college and hostel, a dharamshala for pilgrims, a renovated Sant Niwas to accommodate Katha Vachaks and their disciples and a Langar for pilgrims and needy people at Langar Bhavan.

Air – The nearest airport is Raja Sansi or the Amritsar Airport which is at a distance of 10 km from the temple.

Road – The temple is at a distance of 2.5 km from the Amritsar bus stand. There are taxis and cars available up to the temple as NH1 connects Delhi to Amritsar.

Pilgrims can stay at the Shrimati Dhanwant Kaur Dharamshala provided by the temple. There are different types of hotels at various budgets near the temple. 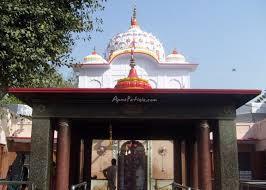 Another famous temple of Punjab is the Mata Kali Devi Temple situated on the Mall Road in the city of Patiala opposite Baradari garden.  It was built by Maharaja Bhupinder Singh of the erstwhile princely state of Patiala in 1936. This beautiful temple attracts devotees from all over the country. The story of Goddess Kali has been found in the Devi Mahatmya of Markandeya Purana. She is said to be the incarnation of Goddess Durga and Goddess Parvati. She is said to symbolise the Shakti aspect of creation, preservation and destruction. Her fierce demeanour signifies the destruction of ignorance and evil for the protection of the righteous.

The temple is built in white marble and is known for its beautiful architecture. Goddess Durga in the form of Mata Kali is the main deity of this temple. The six foot idol is black in colour in standing position inside the gold plated sanctum. She is seen with blood shot eyes, open mouth and protruding tongue with a bent sword and a human head in her hand. It is said that the idol was consecrated by the Maharaja who brought it all the way from Bengal to the temple. The walls of the temple have beautiful murals and scenes from Hindu epics and mythology. Within the temple complex is an ancient temple dedicated to Mata Rajarajeshwari. The temple has been declared as a national monument due to its design and architecture.

Devotees offer mustard seeds, coconut, sweets and bangles to the Goddess who is said to fulfil the desires of all her devotees.

The temple is decorated with lights and flower garlands during Navratra festival and devotees come from all over the country to offer prayers.

Air – The closest domestic airport to Patiala is the Chandigarh airport which is at a distance of 70 km.

Rail – One has to take the Delhi Bhatinda Inter City Express or the Shatabdi Express to Ambala and then take connecting trains to Patiala.

Road – Patiala is easily connected by road to all major towns and cities and taxis and buses can be used to reach the temple.

There are many hotels of various budgets to suit the convenience of  pilgrims.

Hindu temples link man with the deities and enable expansion of the mind to the Universal Consciousness. A temple contains all the five Cosmic elements namely air, fire, water, earth and space that sustain life. The temple conveys the underlying principle that all things are connected and are essentially divine. It enables the pilgrim to still the mind away from the distracting influences of the world and focus on the Divine in an aura of peace and solitude. The temples of India are not only centres of prayer but are also venues to celebrate festivals, commemorate arts and dances, weddings, child birth and is the hub of community life. Temples are edifices of beauty and grandeur that reflect the architecture and history of various eras. They are store houses of spiritual power which enable people to meditate and contemplate in silence on the Divine Lord in the midst of their turbulent daily lives. They offer peace and solace to the tired mind and help in removing despair in times of sorrow. The spiritual current generated in these temples by the worship of thousands of devotees visiting them transforms these temples helping future generations who visit these sacred places. Temples like Durgiana Mandir and Mata Kali Temple preserve the art and culture that was prevailing in ancient times for posterity thus passing on the legacy of a nation for generations to come.