The state of Tripura in the North East of India offers plenty of attractions to tourists in the form of rock-cut carvings, temples and palaces. Pilgrims and tourists come from all parts of the country to visit the temples which are well known for their design and sculptures. One of the well-known temples of Tripura is the Kamalasagar Kali temple or the Kasba Kali Bari 27 km away from Agartala which is the capital of Tripura. Its scenic beauty and tranquil environment make it an important place in the tourism map of Tripura. 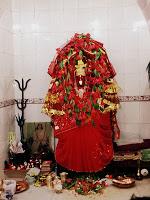 The term ‘Kasba’ means small town in Arabic. Earlier this part of the state was said to be a part of erstwhile Bangladesh. According to some legends, the place was earlier known as Kolaigarh and later renamed Kasba after the Mughals attacked it. It was established by King Kalyan Manikya in the 17thcentury and later completed by his descendants.  Adjoining to the temple is the Kamalasagar Lake which was constructed by Maharaja Dhanya Manikya and named after his wife Kamalasagar and now is at the border of Bangladesh.  People come to picnic by this lake in large numbers.

The temple is located on a hillock and is coloured in red and white shades and the temple complex contains images of a number of different deities on its walls. The image of Maa Kali in the temple made of sandstone is similar to Mahishasur Mardhini or Dashabhuja Durga and is worshipped in the Shakti tradition. It is referred to as Kalibari due to the presence of a Shiva Linga at the feet of the deity. The evening arati at the temple is a beautiful sight to see and enhances the worship and mood of prayer. Pilgrims flock to this place in large numbers especially during festivals like Navratri.

Air – The nearest airport is at Agartala which is at a distance of 27 km from the temple.

Rail – The nearest railway station is at Kumaraghat.

Road – Buses and taxis can be taken to the temple.

There is a guest house for tourists named Kumilla View in Kamalasagar run by Tripura Tourism Dept.

The temple was built by Maharaja Krishna Manikya Debbarma. The Kokborok names of the fourteen Gods and Goddesses are Lampra, Akhatra, Bikhatra, Burasa, Thumnairok, Bonirok, Sangroma, Mwtaikotor, Twima, Songram, Noksumwtai, Mailuma, Khuluma and Swkalmwtai. They are identified as Shiva, Durga, Han or Vishnu, Ma or Lakshmi, Vani or Saraswati, Kumar or Kartikeya, Ganapa or Ganesha, Brahma, Prithvi, Abdhi or Samudra, Ganga, Sikhi or Agni, Kamadeva and Himadri. They were worshipped by the Cantais who were the priests of the Tripuris and were regarded as the presiding deities of the royal house.

The temple is designed in the style of the Bengal dome patterned after the roofs of village huts in Bengal. Traces of Buddhist influence can be seen on the dome which is surmounted by a Stupa like structure. The temple has a Nat Mandapa and Garbhagriha. The top of the dome is crowned with Kalash (metal pot) and Pataka (flag).

This festival is celebrated in Tripura in the month of July/August and involves the worship of the fourteen Gods who are the dynasty deities of the Tripuri people. The word ‘Kharchi’ is derived from the two Tripuri words ‘Khar’ or ‘Kharta’ meaning sin and ‘chi’ or ‘si’ meaning cleaning. In other words the Kharchi puja means cleansing the sins of the people of the kingdom. It is performed for seven consecutive days at the Chaturdasha temple. On the day of the puja the fourteen deities are carried by members of the Chantai and taken to the River Saidra. It is bathed in the holy water and brought back to the temple. They are then decorated with vermillion on their foreheads and worshipped with various flowers. People throng the temple during festivals and offer sweets and other items to the Gods. Animals like buffalo, goat and fowls are also offered to the deities. Cultural programmes are organised

Air – The nearest airport is Agartala airport which is at a distance of 14 km.

Rail – The nearest railway station is at Kumaraghat which is at a distance of 140 km.

Road – Buses and taxis can be taken to the temple from Agartala.

There are guest houses and lodgings put up by the Tripura tourism dept.

Goddess Bhuvaneswari is an aspect of Durga or Devi in Hinduism and is the fourth of the ten Mahavidyas or Dasha Mahavidyas (the ten aspects of Goddess Shakti or Devi Parvati).They represent a spectrum of feminine divinity, from benign and calm to angry and ferocious forms of the Goddess. The word ‘Bhuvaneswari’ means ‘Goddess of the worlds’, the worlds being Bhuh (earth), bhuvah (atmosphere) and Svah (heavens). She is the Sovereign Queen and ruler of the universe. She is said to fulfil all desires of her devotees. There are a number of temples in India and abroad dedicated to her. One of the most famous temples of Goddess Bhuvaneswari is found in the state of Tripura on the bank of the River Gomati at the temple town of Udaipur. It is at a distance of 55 km from the capital city of Agartala.

The temple was constructed in the 17th century by Maharaja Govinda Manikya. Udaipur was the capital and official residence of the Manikya dynasty. It has been mentioned in the two plays of Rabindranath Tagore namely Rajarshi and Bisarjan.

The temple was erected on a 3 feet high elevated porch. There are stupas at the entrance, char Chaala roof and a core chamber. The Char Chaala style of temple architecture began in Bengal where the temples have a curved roof made up of four triangular segments. The ridges and cornices are curved and the roof of the chamber is extended lengthwise from a central dome by narrow corbelled vaults and arches.  The highlights of the temple are the flower patterned motifs that adorn the stupas and pillars.

Air – The Agartala airport is the nearest airport at a distance of 55 km from the temple.

Rail – The nearest rail head is Kumarghat on the North East railway.

Road – Buses, taxis and pre-booked rented cars can be taken to reach the temple.

There are a number of hotels to accommodate pilgrims suiting to various budgets.

The state of Tripura has many mountain ranges and forests covering the length and breadth of the land. Its magnificent palaces and temples attract pilgrims from all over the land. According to historians, it was mentioned even in the Puranas and the Mahabharata. The distinct architecture and the calm ambience of the temples make Tripura an important pilgrimage and tourist destination among the states in India.