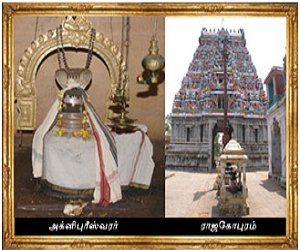 Agnipureeswarar Temple is situated in Thirupugalur village, in Tamil Nadu, and this is a famous Shiva temple, and it is believed that this temple was built by a Chola king during the 10th century AD. Here Lord Shiva is known as Agnipureeswarar and Mata Parvathi is worshipped as Karundar Kuzhali. The famous Nayanmar saint Appar visited this temple, and after singing bhakti songs on Lord Shiva, he has attained salvation at this temple.

The temple is open for public from 6 am to 12 pm and from 4:00 pm to 8:30 pm. Main Festival would be celebrated during the Tamil month Vaikasi (May – June) and Shiva Rathiri and Thiruvadhirai festivals are also celebrated in a grand manner in this temple.

Apart from the main shrine, shrines of Mata Karundar kuzhali, Agni, Ganapathy, Subramanya, Sanisvara, Annapurani and Mahalakshmi are also found in this temple. Sambandar, has also visited this temple, and sung songs on Lord Shiva.  Those who suffer from fire burns, ulcers and heat related diseases are suggested to visit this temple, and they can pray to Lord Shiva and Agni Bhagavan in order to get relieved from their diseases.

Ancient kings used to visit this temple before going to the battle field. Agni Bhagavan is the god of fire, and he is considered as very holy, pious and a gentle god, and while performing fire sacrifices, he would send the share of oblation to the respective gods.